Sunnis and Kurds in Iraq are wary that if unresolved, the fighting among Shiite factions could spill over into their regions. 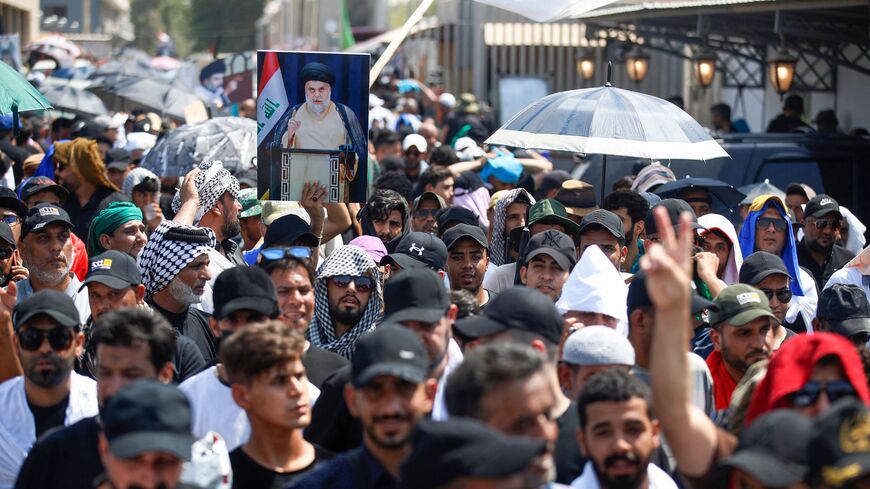 Supporters of Shiite cleric Muqtada al-Sadr gather outside the Iraqi parliament in the Green Zone in the capital Baghdad, on the seventh day of protests against the nomination of a rival Shiite faction for the position of prime minister in the heavily guarded Green Zone, on Aug. 5, 2022. - AHMAD AL-RUBAYE/AFP via Getty Images

The Shiite split no longer seems to be limited to central and southern Iraq, the areas of influence of Shiite parties. Its consequences are now also being felt by the Sunni and Kurdish parties in the north and west of the country.

On Aug. 3, the President of Kurdistan Region, Nechirvan Barzani, warned that Iraq's dangerously tense political and security situation “requires the cooperation of all parties to preserve the security and stability of the country.”

Kurds, this time, do not seem willing to stand by waiting for the Shiites to end their internal spat. On the contrary, they have put forward an initiative to negotiate in Erbil, the capital of the region. This echoes the Kurdish fears that the Shiite-Shiite conflict will affect them.

“We call on the political parties to show utmost restraint and start direct talks to resolve the existing disputes. In this critical period, further exacerbation of the situation will endanger the social harmony, security and stability of the country,” Barzani said in a statement July 31.

The Kurds' fear is shared by some Shiite politicians and armed leaders. A Shiite political source close to the Iranian-affiliated armed factions told Al-Monitor, “If the Shiite-Shiite fighting happens, it will also take place among Sunnis and Kurds. Some have been anticipating this moment in both societies as an opportunity to confront the influential figures in the Kurdish and Sunni regions.”

He added, “This is not a threat to the Sunnis and the Kurds, but it is a fact. They must seek calm and refrain from fueling Shiite-Shiite fighting." Also, he said, some Arab countries, including Saudi Arabia and the UAE, could also be affected.

Iraqi Prime Minister Mustafa Al-Kadhimi is aware of the dangers. He urged all parties to sit at the table for a national dialogue.

The United Nations, France and the United Kingdom, as well as the Kurds, supported Kadhimi. On Aug. 2, Barzani reiterated his support for Kadhimi’s call to bring Iraqi political parties closer to find a way out of the current crisis.

Meanwhile, the Sunnis fear any intra-Shiite fighting would backfire on them. Al-Monitor learned that at the end of July, Parliament speaker Muhammad al-Halbousi discussed with Iranian President Ebrahim Raisi how Iran can persuade the parties close to it to prevent any fighting in the street.

Halbousi knows that the province of Anbar, his birthplace and the capital of the Sunni decision-making quarters, will be the first to feel any repercussions. This is especially true given the existence in Anbar of opponents to Halbousi backed by armed Shiite factions, such as Sattam Abu Risha, the son of the tribal leader Abdul Sattar Abu Risha, who was killed in 2007 by al-Qaeda.

On Aug. 1, Sattam Abu Risha wrote on his Twitter account, “We call for keeping the danger away from our people in Anbar, and we will not incite any fighting between brothers.”

A high-level Sunni political leader told Al-Monitor, on condition of anonymity, “The Shiites believe that we are trying to stoke strife among them, and this is not true." Instead, he said, they are talking with Muqtada al-Sadr, the leader of the Sadrist movement, and with the Coordinating Framework, the Iran-backed side in the Shiite dispute.

The source added, “We believe that the crisis is more personal than a crisis between parties. Al-Sadr wants to retaliate against the head of the State of Law coalition, Nuri al-Maliki, and wants to exclude him. If it weren't for this personal affair, the Shiite-Shiite split would not have happened.”

If the Shiite-Shiite crisis escalates, it most likely will spread across large areas of Iraq. This is due to the increasing influence of the armed factions, most of whom represent the Coordinating Framework, as well as Sarayat al Salam, who represents Al-Sadr. These factions are present in areas outside their geographical and societal boundaries.

The Sunnis and the Kurds, although al-Sadr’s victory would fall in their favor, do not want the Shiite-Shiite conflict to flare up. They are well aware that the harm they may face outweighs any potential gains.