Hundreds of migrants detained outside of UN center in Libya

The migrants, refugees and asylum-seekers were camping out near the building in the Libyan capital, Tripoli. 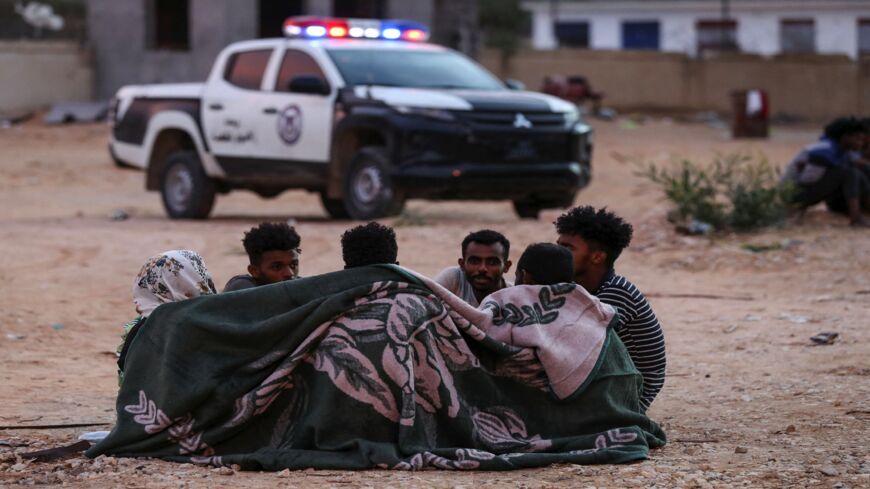 African migrants huddle under a blanket at a makeshift shelter in the capital Tripoli's suburb of Ain Zara, on Oct. 9, 2021. - MAHMUD TURKIA/AFP via Getty Images

The migrants had been conducting a sit-in outside of the United Nations-affiliated center when Libyan police dispersed them “with force” and conducted arrests last night, the Belaady Organization for Human Rights, a Libyan nongovernmental organization (NGO), said on Facebook.

The Norwegian Refugee Council, another humanitarian NGO, said more than 600 migrants, refugees and asylum seekers were detained — women and children among them. The Community Day Center used to provide humanitarian assistance to them before closing last December. Authorities used violence to round them up, and one person suffered a gunshot wound. Some of the tents the migrants were staying in were burned, the council said in a press release.

A Sudanese migrant told The Associated Press that police beat some of the migrants.

Libya is a major transit center for people from Africa, the Middle East and elsewhere who seek to illegally enter Europe. Many are fleeing war, while others want better economic opportunities in the European Union. Libya is relatively close to Europe via the Mediterranean Sea.

The UN has long warned that migrants face several dangers in Libya, which has been in a state of chaos since the 2011 NATO-backed uprising that deposed longtime ruler Moammar Gadhafi. Last October, the UN said that detained migrant children were being held in “devastating and inhumane conditions.”

Libyan authorities sometimes arrest migrants, including those who seek to cross the Mediterranean. The journey is dangerous, and more than 1,000 migrants died at sea in 2021.