The Libyan coast guard has acknowledged the warning shots had endangered the migrant families. 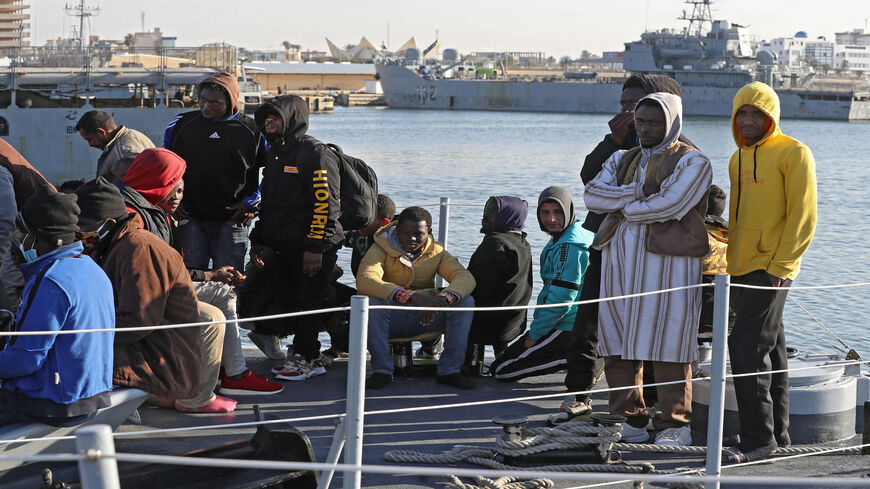 Migrants arrive at a naval base in Tripoli, after the coast guard intercepted an inflatable boat carrying 138 Europe-bound migrants off its west coast, Libya, March 31, 2021. - Mahmud Turkia/AFP via Getty Images

A nonprofit search-and-rescue group has released video showing a Libyan coast guard vessel firing at and chasing a boat in distress that was carrying migrants across the Mediterranean Sea.

From its civilian reconnaissance aircraft, the German nongovernmental organization Sea-Watch filmed what it described as a “brutal attack.” In addition to shooting in the direction of the migrants, Sea-Watch said the coast guard vessel rammed the wooden boat and threw objects at the families on board. The organization said it urged the Libyan vessel over the radio to stop the shooting.

“Europe’s partners of the so-called Libyan coast guard are approvingly accepting the death of people on the move,” said Felix Weiss of Sea-Watch’s Airborne Operations.

“Those who shoot at refugees and try to capsize their boats are not there to save them. The EU must immediately end cooperation with the so-called Libyan coast guard. European states like Malta must take back responsibility for their rescue zones and fulfill their duty to rescue.”

The Associated Press reported on Friday that Libya’s navy acknowledges that apparent warning shots fired by the coast guard vessel had endangered the lives of the migrants. The navy condemned “any acts that violate local and international standards and laws" and pledged to hold those involved accountable.

Since the toppling of longtime Libyan dictator Moammar Gadhafi in 2011, Libya has become a main transit country for migrants from sub-Saharan Africa who are willing to risk the perilous journey on the Mediterranean Sea for the chance of a better life in Europe.

The number of people making the dangerous trip soared during the pandemic, even as many European countries cracked down on immigration. An estimated 866 people have drowned crossing the Mediterranean Sea this year, according to the International Organization for Migration (IOM).

IOM reports that the Libyan coast guard has returned more than 13,000 people to the North African country this year. Migrants in boats bound for Italy or other European countries are often intercepted by the coast guard and forcibly transferred to government-affiliated detention centers, which human rights organizations have described as overcrowded and inhumane.

In June, Doctors Without Borders suspended its medical services in two detention centers in the Libyan capital after a “persistent pattern of violent incidents” against migrants and refugees.