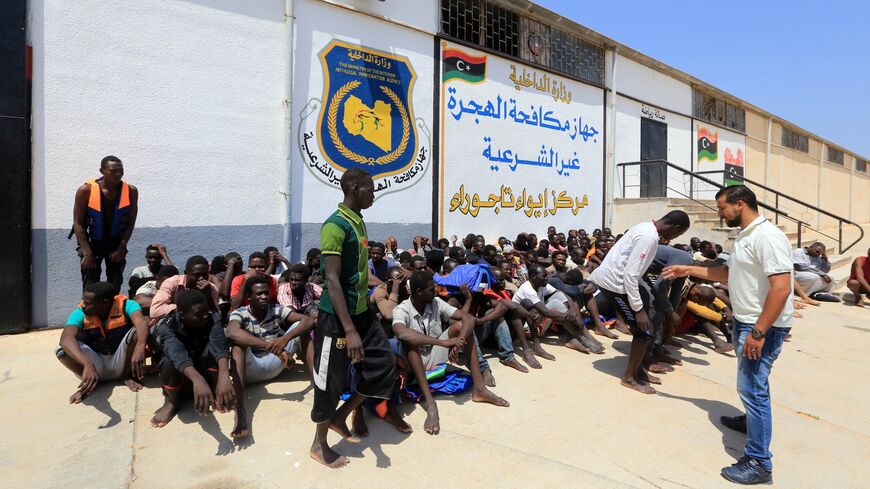 Migrants who were rescued at sea by the Libyan coast guard arrive at a migration detention and shelter facility in Tripoli's eastern suburb of Tajoura on Aug. 6, 2017. - MAHMUD TURKIA/AFP via Getty Images

In June 2018, the UN Security Council imposed a travel ban and froze the assets of Milad and five others accused of leading human trafficking networks in the North African country. Milad was then dismissed from his post at a coast guard unit in the city of Zawiya, west of Tripoli.

The UN Panel of Experts on Libya determined that Milad was “directly involved in the sinking of migrant boats using firearms.” Migrants described being picked up at sea by a ship used by Milad. They were then transferred to a Libyan detention center where they were held in brutal conditions and subject to beatings.

In a 2018 phone call with Reuters, Milad denied any wrongdoing or involvement in smuggling.

Since the toppling of longtime Libyan dictator Moammar Gadhafi in 2011, Libya has become a main transit country for migrants from sub-Saharan Africa. The Mediterranean Sea route is a perilous journey, but thousands of migrants risk it every year for the chance of a better life in Europe.

The United Nations, human rights organizations and journalists have warned that migrants forcibly transferred back to Libya routinely fall prey to traffickers or are abused inside government-affiliated detention centers. Last month, Amnesty International accused the Libyan authorities of failing to prevent “long-standing patterns of abuse against refugees and migrants, including by state officials and affiliated militias.”

Doctors Without Borders said on Saturday that an armed group in western Libya had detained at least 60 migrants, including two dozen children, and was holding them in “appalling conditions.”