Libya is a major departure point for people seeking to irregularly reach Europe, and the journey can be deadly. 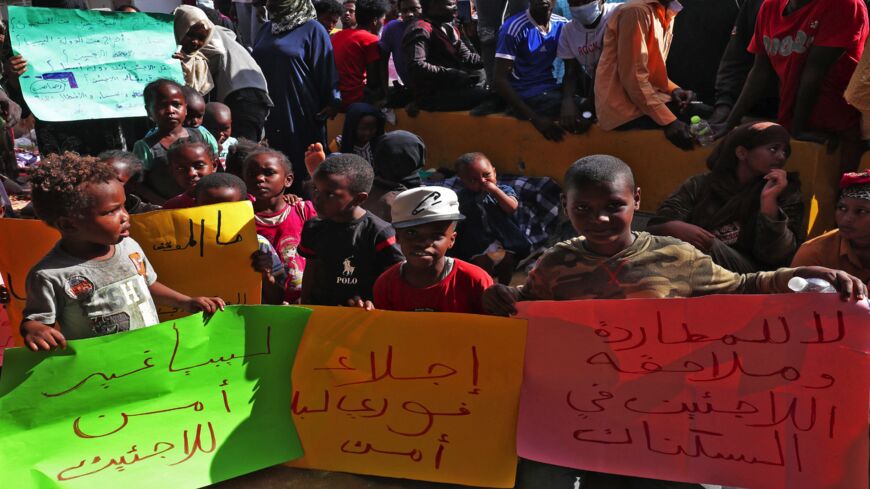 African migrants stage a demonstration outside the headquarters of the UN Refugee Agency in the Siraj area of the Libyan capital, Tripoli, calling for their repatriation, on Oct. 9, 2021. The demonstration took place after guards shot dead six migrants at an overcrowded Tripoli detention facility, the International Organization for Migration said, in the latest violence against migrants following mass arrests in recent days. - MAHMUD TURKIA/AFP via Getty Images

Approximately 751 women and 255 children were among the thousands of migrants and asylum seekers detained in Libya recently. There are also five unaccompanied children and at least 30 infants being held in poor conditions at the detention centers in the capital, Tripoli, according to UNICEF.

“Children are held under devastating and inhumane conditions in these detention centers,” said UNICEF’s acting Libya representative, Cristina Brugiolo, in a statement sent to media. “We can assume the actual number of children held may be much higher, as many boys are reportedly placed in cells with adult males.”

One reason the conditions are so bad is that detention centers are well over their capacity. Libya’s largest of such centers, Al Mabani, is currently holding more than 5,000 people, which is four times its official capacity. UNICEF reiterated calls for all children to be released from detention centers in Libya, per the statement.

Libya is a major destination for migrants, many of whom want to sail to Europe. The UN’s Office for the Coordination of Humanitarian Affairs said last month that there were 597,611 migrants in the country, including 3,860 in detention centers and 42,210 registered refugees. There was therefore an increase by more than 1,000 people in detention centers since last month, per UNICEF’s figures.

The journey from Libya to Europe via the Mediterranean Sea is additionally dangerous. Earlier this month, the dead bodies of 17 people washed up on a Libyan beach.

A UNICEF official told Al-Monitor in April they seek the release of detained children to any environment that has better conditions than the detention centers.