The Libyan Coast Guard has intercepted and brought back thousands of people seeking to illegally enter Europe via the Mediterranean this year. 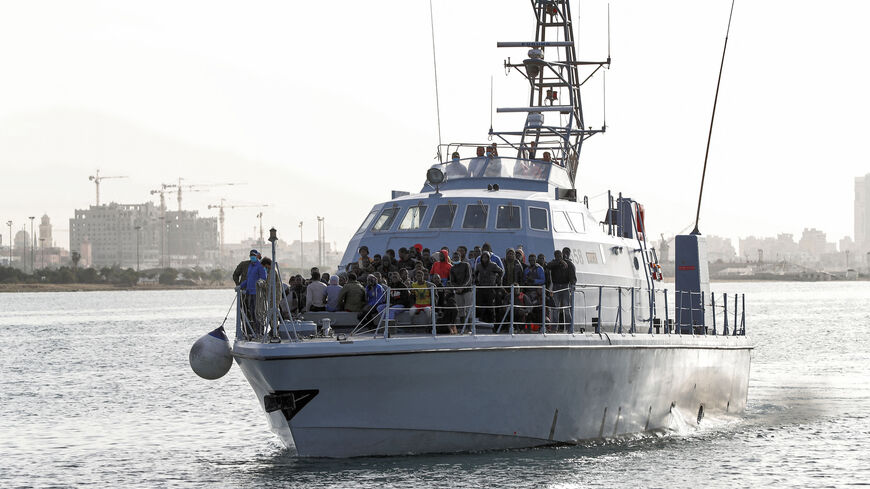 Migrants arrive at the naval base in the Libyan capital of Tripoli on April 29, 2021, after the coastguard intercepted an inflatable boat carrying 99 Europe-bound migrants off its west coast. - MAHMUD TURKIA/AFP via Getty Images

More than 270 people were rescued at sea this week after attempting to sail to Europe from Libya.

The group of migrants and refugees was saved by the Vos Triton ship on Monday in international waters. On Tuesday, the the Libyan Coast Guard brought them to Tripoli, where they were taken into detention, the International Organization for Migration (IOM) said in a statement Wednesday. The Vos Triton is a transportation vessel that flies the flag of Gibraltar and docks in Tripoli, according to the shipping tracking website MarineTraffic.

Libya is a common departure point for people seeking to reach Europe via the Mediterranean Sea from the African continent. Many seek better living conditions in Europe or are fleeing violence in their home countries. The Libyan Coast Guard has returned more than 13,000 to shore so far this year, already surpassing the same figure for all of 2020. Several hundred have died making the perilous journey, according to the IOM, which is a body of the United Nations.

Those seeking to cross the sea are not necessarily safe after they are rescued. Libya is not a safe place for returned migrants, according to the IOM.

“Migrants and refugees disembarked in Libya often end up in appalling conditions where they may be exposed to abuse and extortion,” read the statement, which was issued jointly from the UN High Commissioner for Refugees. “Others go missing and are unaccounted for, raising fears that some may have been channeled into human trafficking networks.”

A UN official told Al-Monitor in May that children must be released from Libyan detention centers due to horrific conditions there.