Following the tragic drowning of Libyans trying to flee the country, efforts by the international community to curb this phenomenon in Libya seems to have become indispensable. 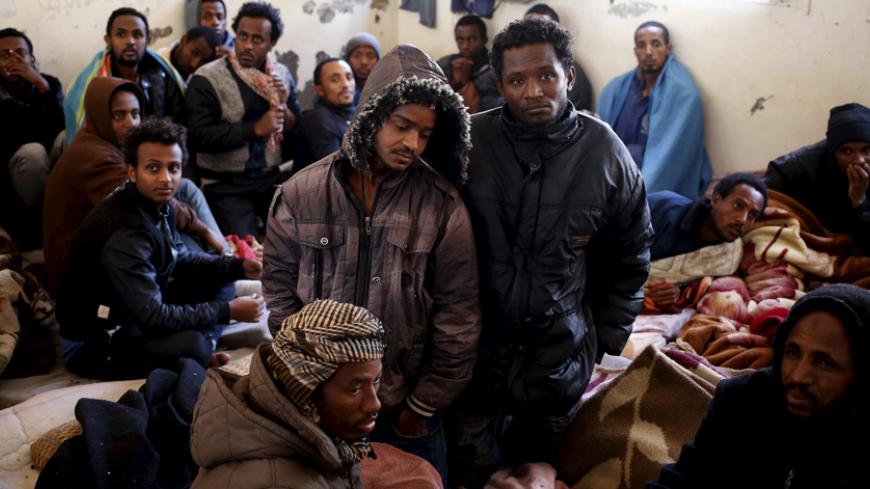 European leaders who met at an emergency summit in Brussels on April 23 failed to produce a satisfactory response to deal with illegal immigrants making the dangerous Mediterranean Sea crossing in search of a better life or simply fleeing their home countries in fear of violence and persecution.

Many of those taking the risk are genuine asylum seekers. In fact, Amnesty International has already condemned the European Union for its “shameful” response to the most recent tragedy in the Mediterranean. Over 1,000 migrants drowned on April 20, as their boats capsized a few miles from the Libyan shores where their journey had started.

Indeed, EU leaders agreed to increase funding to around 9 million euros (about $1 million) per month for rescue operations at sea — named Triton — but without extending the scope of rescue to cover larger areas of the high seas, not much will change, according to Amnesty International, which described the EU decisions as only meeting the problem “halfway.”

The International Organization for Migration (IOM) described the situation in the Mediterranean as “a tragedy” and called for “legal and safe avenues” to be identified for “migrants to avoid resorting to transnational criminal organizations.” Such measure would involve ease of visa procedures and safe corridors for sub-Saharan African migrants and others to take away from smugglers who make millions of dollars from the migrants’ misery.

Many EU leaders, including the French president, think that unless Libya is stabilized and its government exercises control over the entire territory of this vast country, illegal migrants will continue to attempt to make the overseas trip to reach Italy, Greece and Malta. During a meeting in Luxembourg on April 20, EU interior and foreign ministers suggested that a limited, well-targeted military operation could be launched to destroy the locations and boats used by smugglers from Libya to transport people. Many potential immigrants making the trip to southern EU shores used to live and work in Libya when the country was safe and economically flourishing.

France and the United Kingdom have agreed to seek UN approval for such military action while tasking EU foreign policy chief Federica Mogherini to come up with an action plan proposal to “capture and destroy the smugglers’ vessels before they can be used.”

In practice, however, achieving such a goal is easier said than done since it involves military action in another country — Libya in this case. It could have serious unforeseen legal and political repercussions, and it could well play into the hands of terrorist groups such as the Islamic State in Sirte, central Libya, which is likely to be linked to migrant smugglers.

It is not going to be easy since smugglers only use regular boats, such as fishing boats, which lack specific features to clearly identify them as being used for smuggling people, unless they are identified at the very moment of immigrants going on board. Pinpointing such boats before they set sail from Libyan shores would be a nearly impossible task.

Europe seems to ignore, when considering solutions to the flood of illegal immigrants, the fact that major EU countries including France and the United Kingdom helped destroy Libya when they led the military campaign against Moammar Gadhafi's regime in 2011, which has brought chaos to Libya ever since.

French President Francois Hollande hinted at the issue just as he arrived in Brussels. Hollande was quoted as saying, “We need to fix our past mistakes in Libya," clearly referring to the Franco-British rush into military action in Libya in March 2011 in support of the rebels fighting the Libyan government, despite the warning by the late Libyan leader of the consequences.

However, tackling the crisis in Libya is not easy in the absence of an effective Libyan government able to safeguard its territory, particularly along its long coast on the southern Mediterranean coastline where most of the smuggling boats take off near Zawara, 120 kilometers (74 miles) west of Tripoli, Zliten and Misrata along the eastern coast.

Libya’s internationally recognized government, based in Tobruk and headed by Prime Minister Abdullah al-Thinni, lacks the means and force to control the country, and the international community — the EU included — have so far failed to assist it despite Thinni’s repeated appeals for help by meeting its need for military hardware and training for its new army. As recently as April 15, Libya’s premier criticized the West for turning its back on the country it helped destroy four years ago.

Europe appears to be betting its hopes on the UN-mediated talks among Libyan factions planned to resume in Skhirat, Morocco, next week with UN mediator Bernardino Leon brokering some kind of peaceful settlement in a country shattered by violence and lawlessness. Leon appeared optimistic that an agreement is imminent.

But any agreement among politicians could be worthless unless those calling the shots on the ground realize that there will be serious consequences if they do not respect the outcome of the negotiations. This is unlikely to happen without the UN strongly and clearly reinforcing punishments already agreed on in its resolutions, particularly Resolution 2174 adopted in August 2014.