How my hometown became major smuggling route in Libya

Libya's interior has become a hub for human smugglers who utilize the uncontrolled roads to transport migrants wishing to travel to Europe by sea. 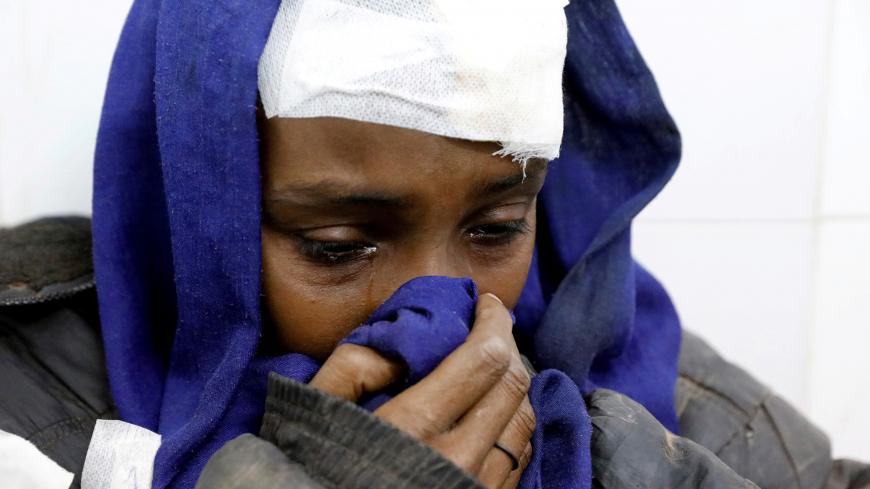 A migrant who was injured in a truck crash is seen at a hospital in Bani Walid, Libya, Feb. 14, 2018. - REUTERS/Hani Amara

Around 30 illegal migrants were killed when the pickup truck they were crowded into turned over on Feb. 14, southeast of my hometown of Bani Walid. The truck was carrying an estimated 150 migrants, most of whom were seriously or slightly injured and taken by volunteers and paramedics to the town’s only public hospital. While it is hard to confirm what happened, it has been reported that the majority of victims came from countries such as Eritrea, Somalia and Sudan. Unfortunately, this is not the first time migrants have died en route to Libya’s coast on the Mediterranean Sea, from where smugglers arrange sea trips to Southern Europe, particularly Italy. It will not be the last, either.

Over the last couple of years, Bani Walid — about 180 kilometers (111 miles) southwest of Tripoli — has become one of the preferred routes for human smugglers. Like most Libyan cities, the town lacks proper security and none of Libya’s two governments have any real control, let alone are able to reinforce security. Combating illegal immigration has not been a priority of Libya since the 2011 civil war.

I was shocked to see that my small village of Rozqa, on the far western edge of Bani Walid, has become a secondary route for smugglers’ pickup trucks. The first time I spotted one such truck, it was filled with about 30 people — mostly Africans — passing through the unpaved road that crosses the village from south to north. It was an evening in September 2017, while I was visiting some friends, when the truck came charging through at a relatively high speed. I asked a friend about it and he simply said, “This is a smuggling truck going to Tripoli.”

When asked if any of the village people are involved in the smuggling, my friend said, “Of course. It is one of the few jobs available to young people here.”

My peaceful little village became the preferred route because of its location; the village connects southern Bani Walid with the highway heading north to the capital, Tripoli, away from crowded residential centers in town. Going through the village means bypassing any of the occasional and sporadic security road checkpoints set up by local militias every now and then. The route provides a secure alternative to paved roads far beyond Bani Walid’s northern edge, where local militias' road checks usually do not operate. Once out of Bani Walid on the way to Tripoli, there are many unpaved roads that pass through fields and valleys, away from any potential security checks.

However, most drivers do not go as far as Tripoli or other coastal cities to deliver their load of migrants, as they have to unload their passengers at least once at some point to be taken over by another driver. This has been the standard practice for a while. Hassan, who does not wish to reveal his full name, has transported migrants since 2014 in his eight-seat minibus from around Sirte and through Bani Walid on the way to Tripoli.

“I usually take the migrants to a point near Tarhouna, just north of Bani Walid, and then leave them there for another driver to pick them up and continue to either Sabratha or other staging points on the coast,” he said. I asked him why and he said, “This is our arrangement so different people could benefit from it.” Sabratha, Zwara and recently Zliten are the best-known staging points for boats and dinghies taking migrants to Italy by sea.

Typically, the route is shared between at least two drivers, each covering one segment within the area he knows best. For the driver, it's important to know how to hide and how to avoid roadside checkpoints, where militias demand money for safe passage. Otherwise, the militias might confiscate the truck and possibly take passengers to detention.

Without any effective or strong government since the 2011 NATO military intervention, Libya today is easy prey to all kinds of criminal activities — particularly human smuggling, mostly of sub-Saharan Africans who are headed to Europe in search of better lives. Because of the high number of migrants who want to go to Europe, smuggling has become a prosperous and lucrative business appealing to hundreds of young Libyans in a country where lack of security and small, sporadic wars over the last seven years have destroyed most other economic opportunities. Each trip would fetch the driver around 1,500 Libyan dinars (about $150), which is good money in Libya.

This, along with high unemployment, explains why so many young people, particularly those outside of the big cities, get involved in smuggling despite its dangers. I know at least one such young man from my own small village who, in less than two years, managed to build a house, buy a car and even get married. His family was poor and could barely get by, but ever since he got into the business, things have changed drastically for him and his family.

In Bani Walid, the number of people getting involved in smuggling is increasing, which also creates competition. Sometimes violent fights break out between different groups over who can operate in which segment of the route. In April 2016, at least 16 Egyptian migrants were killed when armed smuggling groups fought each other to control the entire smuggling route.

With very few employment opportunities available and a lack of proper government control, more and more young people in Libya’s interior will continue to turn to smuggling as a steady job.