Returning to Libya after three years, the author finds a mostly hopeless population desperate for security and stability. 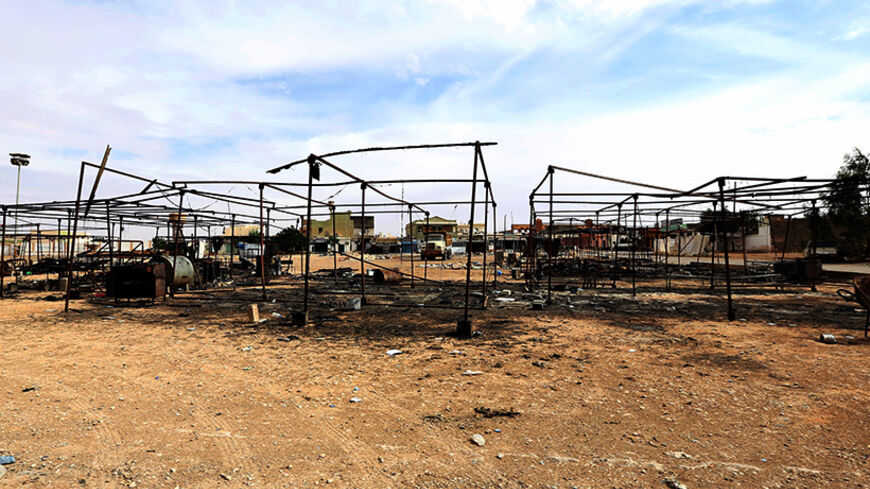 The charred remains of a vegetable market are seen in Bani Walid, Oct. 31, 2012. - MAHMUD TURKIA/AFP/Getty Images

After nearly three years of living in Europe I decided to go home for a visit. I spent six weeks between Tripoli, the capital, and Bani Walid, my hometown. The whole experience was like visiting a foreign country and, despite my well-traveled life, my home country seemed like a strange place to me.

The first thing that struck me was how desperate and disappointed Libyans are three years after the NATO-backed rebels toppled the Moammar Gadhafi regime in what is wrongly described as a “revolution” instead of a civil war, as my old schoolmate had described what happened in 2011. When the war ended, Libyans were full of hope and optimism. Today, they are hopeless and pessimistic as never before.

To gauge the public mood I used taxis to move around, frequented cafes, spoke to strangers and met as many friends and acquaintances as possible. During my entire stay, and out of dozens of taxi trips, only one taxi driver sounded satisfied with the current state of affairs of the country and was still hopeful that “it will settle down,” as he put it.

Tripoli’s buildings are still covered with graffiti, almost all of it anti-government, anti-General National Conference, anti-Islamist political parties, scornful of militia and in some cases anti-“revolution” itself. Only a very few are shaming or blaming Gadhafi and his regime anymore. In 2012, with aspirations and hopes very high, almost all graffiti was anti-Gadhafi and his supporters. Nowadays, he is hardly forgotten. Actually, he is still remembered, particularly at times of high tension. Many Libyans I spoke to seem to miss the peace and security in their lives under his rule. Others seem to think he should have fled the country alive. If he had, now we “would beg him to come to our rescue,” as the hairdresser told me in the Gargarish district west of Tripoli.

During my entire visit, I encountered only three situations where traffic wardens or civil police were visibly on duty. In fact, in one instance the policeman was begging a taxi driver to move his taxi that was parked blocking traffic at a very busy junction just outside the main south Tripoli hospital. Of course, the driver only moved after collecting his coffee mug from the cafe by the sidewalk.

Tripoli’s usually busy and crowded seafront used to provide refuge to families and children, especially on summer nights. Nowadays, the entire city center is deserted after nine in the evening. Martyrs Square at night becomes a hub for motorcycle gangs demonstrating their newly acquired skills while a couple of policemen passively watch the show.

Almost every night residents of certain parts of the city hear gunshots and frequent explosions. Most of the gunfire and loud explosions take place in southern Tripoli around Al Hadba and Abu Salim districts. One late afternoon I happen to be around that area when all of a sudden the Salaheddin Road, leading south, was blocked by burning car tires and gunfire erupted. A battle seemed to be unfolding along the road. I was not close enough to see what happened, and by the time I got to the scene the whole episode was over, leaving one young man dead and a couple of others wounded. No one could tell what happened or why.

At night, Tripoli seems to be a ghost city and a very dangerous place, but during the day it is life as usual, apart from sporadic gunfire and news of shootings here and there. Shops are stuffed with food and consumer goods from Thailand, China, Turkey and Egypt. A French supermarket chain has opened in southern Tripoli, but people complain about high prices.

The number of street beggars has increased tremendously since 2011, when they were few or no Libyans to be seen at traffic lights along main streets.

My hometown, southwest of Tripoli, appeared safer and quieter. In Bani Walid, you hardly see any armed men in the streets, and shops were open until late at night. In the company of many old friends, I moved around the mountain town until the very late hours without any worry. The militia-free town seemed to be doing far better than the capital when it comes to security. Solidarity among the people is even greater now than it was when the town was invaded in October 2012. The local office of the town’s secret and illegal TV station is operating normally despite government objections. I was invited into the office, which occupies three adjacent rooms not far from one of the university buildings destroyed by NATO in October 2011.

The young men there shared their ideas with me, insisting that Aldardanel, as the TV station is known, should go on because it “tells the truth.” From the amount of text messages they receive, they appear to have a good portion of Libyans following them. Almost all local cafes and homes I visited have their TVs on it. Yet, no one wanted to tell me where the TV station broadcasts from. It covers all local events, critically reviews national ones, and has a twice-a-day updated news bar. Its only problem is a shortage of funding, but seemed to work around the problem by cutting expenses. Everyone there works for free.

The militia-free town is still home to refugees from across Libya. A family from Tawergha occupies our old family home. My brother told me that he gave them the house for free, saying, “They can hardly manage for food.” In fact, many homes and apartments in Bani Walid are given free to refugees from other cities. It is a standard policy approved by the town’s social council.

The entire town of Tawergha has been destroyed and its nearly 40,000 inhabitants have been driven out by the nearby Misruata militias. Since the end of the war in October 2011, not a single Tawergha has managed to return home. Neither the government nor local or international nongovernmental organizations could do anything for them.

Most Bani Walid residents are against the NATO-backed rebels and are not regretting it. The town was the last in the country to hold out against the rebels during the eight-month civil war of 2011. People there think they were right to “stand against the rebellion ‘not for Gadhafi but for Libya,’ when you see what happened since then,” as my old friend told me over coffee at his home.

I found people in my little village west of the town to be even more hard-line today than they were three years ago. Less than a dozen of the village men politically supported the rebels. Today, they are totally boycotted and scorned. My uncle was very angry when I suggested visiting another uncle who happened to be pro-rebel. He shouted at me, saying, “You should not!” So I had to drop the subject.

Most of my friends and colleagues who saw me off as I prepared to leave told me not to come back, since “there is nothing to come back to,” as they said. While I share their concerns and despair, I cannot forget Libya. It is my country.