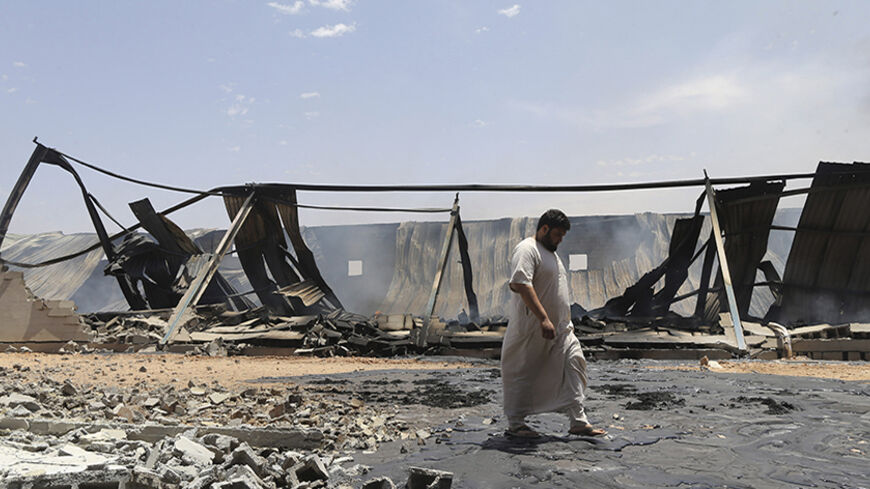 A man walks past destroyed warehouses following clashes between Libyan irregular forces and Islamist militias in the eastern city of Benghazi, May 17, 2014. - REUTERS/Esam Omran Al-Fetori

On March 12, I was among 17 exhausted and agitated passengers flying from Paris to Tripoli on the French-piloted Afriqiyah Airways Flight 8U900 — exhausted because our flight should have left at noon the day before, agitated because we had spent the entire previous day at Charles de Gaulle before we were transported to a nearby hotel for the night.

All the passengers were Libyan except for three Frenchmen and one American businessman. Being a small group, we got acquainted quickly and talked about everything except politics, upon my request. I thought it would be best to avoid the topic.

The Frenchmen were the least talkative and far less sociable among the group, while the young, blond American was more actively engaging. All of them were going to Libya for business. Some of them worked for big companies already operating there, while others had been sent by their companies to try to establish themselves in the oil-rich country.

Since the NATO and Qatari-backed rebels toppled the regime of Moammar Gadhafi in 2011, everyone seems to be trying to sell us Libyans something, be it industrial hardware, services, expertise, consumer goods or even training for our civil servants. Once on the ground in Tripoli, I noticed more Europeans who had just landed. Certainly, they were here for business. Who would risk coming to Libya if not for the money?

Over the last three years, hardly a month has passed without some kind of businessman contacting me, seeking help accessing the Libyan market. I’ve noticed the high number of foreign delegations visiting the country since 2012. Almost all of them have been business-seeking delegations, both governmental and private. Dozens of nongovernmental organizations (NGOs) have also marched into the country in what seems like an endless marketing invasion. I have been approached many times with requests for help or offers of some kind of product or services to market in Libya.

While in Tripoli, I visited different government departments and private and public companies and talked to business people only to find more foreigners embarked on endless marketing rounds. On one such visit, I came across an Italian delegation trying, through a Libyan partner, to sell their management-training package. The Libyan head of the training department said to me after the meeting, “Since the war ended, I have received an endless stream of people trying to sell us something. I have not yet met that guy who came to Libya to help us or offer us something we really need.”

The NGOs come to Libya to teach Libyans how to vote, manage elections, count votes, protect women’s rights, abide by the law and, of course, tolerate gays. Unfortunately, not a single NGO has come to try to help us be one nation again or to be what we used to be: tolerant, accommodating, helpful and forgiving. No help on how to become patriotic in our own country, or what remains of it, or how to be reconciliatory.

When the world stood up for us in February 2011, we thought we would never be isolated again. The UN Security Council passed Resolution 1973 to “protect civilians” against what it called “systematic attacks” by regime forces. When the Friends of Libya group was formed in March 2011 to help us be free, we naively became more confident in the “international community.” Yet the moment the regime fell and we started at each other’s throats, we looked around to see our “friends” had all but disappeared, stopped being friends or came only for the cake.

Three years on, more than a million Libyans are living abroad. Hundreds of families are in foreign countries, far from home for no reason other than fear — fear of kidnapping, extortion, torture or arbitrary death at the hands of rogue militias the world helped arm to bring down the Gadhafi regime. Thousands of Libyans are displaced within the country, with the entire population of Tawergha, a coastal city east of Tripoli, unable to return to their now destroyed homes and businesses. In October 2012, Bani Walid, southwest of Tripoli, was under siege for more than six weeks before it was invaded in broad daylight. Scores of women, children and elderly citizens were killed. Since the end of the war in October 2011, the populations of more than a dozen other towns and villages in western Libya were attacked or forced to flee their homes. Hundreds of civilians were killed, and thousands more are languishing in detention centers outside any judicial process. Victims of torture have retold to different international rights groups the sorts of inhumane treatment they have suffered at the hands of their captors.

Indeed, Libya is more a failed state than the functioning, stable and peaceful country Libyans wanted when they rose up in 2011. The unmistakable reality now is that the world helped us create the mess we live in, but it has long since turned its back on us and gotten busy with other crises elsewhere. In our hour of need, we find no friends to help us heal our country.

Incidentally, the American businessman flew back with me to Paris in May. I asked him if his trip had been fruitful. He said, “As fruitful as the Friends of Libya!”