Libyans celebrated the second anniversary of the start of their revolution despite discontent with the transition under way since the fall of former dictator Moammar Gadhafi, reports Maggie Fick from Tripoli. 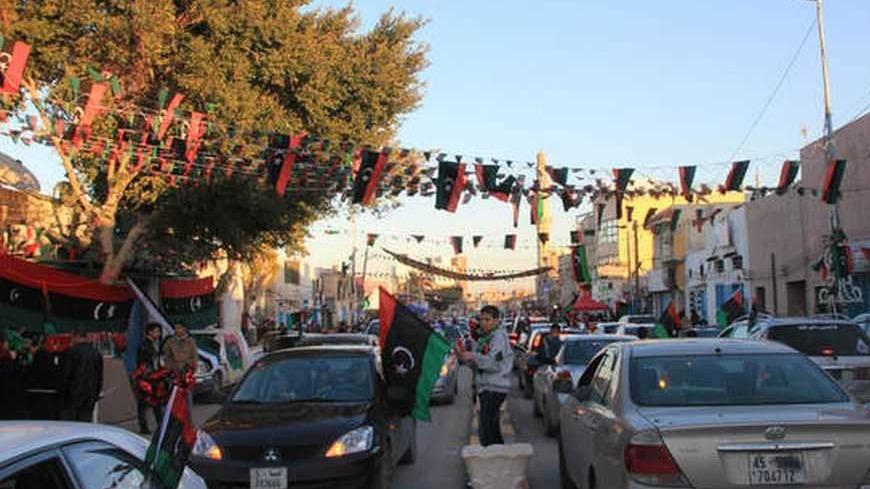 Libyans in the Fashloom neighborhood of Tripoli celebrated the anniversary of the start of their 2011 revolution, Feb. 15. - Maggie Fick for Al-Monitor

TRIPOLI, Libya — Residents of Libya’s two major cities took to the streets on Friday to commemorate the second anniversary of an event that many Libyans consider the “spark” of their revolution. The gatherings were remarkable for what they were not. In the capital, instead of using the day to voice discontent with the temporary parliament elected last summer or to call for political and security reforms to be implemented more swiftly, Libyans spoke with pride about the sacrifices they made during the bloody nine-month uprising. In the East of the country, local leaders in the city of Benghazi canceled mass demonstrations for autonomy in the neglected region over fears they could spark violence, which did not materialize. Reuters reported from Benghazi that a crowd of 2,000 people gathered and chanted anti-government slogans amid songs and speeches of celebration.

Although the official anniversary of the 2011 uprising is not until Sunday, the initial gatherings on Friday allayed fears inside and outside of Libya that the event could be hijacked by radical Islamist elements or other armed groups, particularly in the East, where resentment against the transitional government in the capital runs high and citizens bear the brunt of a near-absence of functioning government and security institutions.

The festive mood in the capital and the relatively subdued atmosphere in Benghazi, the birthplace of the revolution, could be viewed as a reprieve from the deep troubles that beset the country.

It seems clear that Libyans have chosen to celebrate this weekend to recognize the lives lost in the struggle to topple President Moammar Gadhafi instead of raising complaints over the array of challenges that the transitional government has so far made little progress in tackling. However, the sluggishness of the political transition is not lost on many Libyans.

“We are still in the beginning. There is still no state that has replaced Gadhafi’s mafia,” said 29-year-old Hossam Mushabah, who was selling parrots at a Friday morning market near Bab al-Azizia, Gadhafi’s sprawling fortress-like compound. It is still littered with the wreckage from August 2011, when Tripoli fell to rebel forces aided by NATO air strikes.

In the 16 months since Gadhafi’s death, the basic pillars of a new Libyan state — from regular security forces to a legislative body based on a constitution — do not exist. Instead of taking the lead in beginning to build new institutions, the General National Congress (GNC) elected last summer has largely dodged their responsibilities, relying on local armed groups to provide security in the unstable East and even in the capital. It was not until a week ago — more than six months after the GNC was elected — that the transitional body agreed on the key issue of how members of the commission that will draft the constitution will be selected. On Feb. 6, the GNC voted in favor of choosing the members of the future Constitutional Commission through a national vote, instead of through appointment by the GNC. Elections for this commission will be held after a new electoral law is drafted and passed, and therefore is not expected until toward the end of this year.

“There is a theoretical common cause, which is the transition to democracy,” Karim Mezran, a senior fellow with the Rafik Hariri Center for the Middle East at the Atlantic Council told Al-Monitor in Tripoli. “Everyone is happy that the regime is gone and they all want to build a new Libya … but there are many different voices and opinions about how to do it.”

Mezran said that the transitional government elected in July “does not have its act together” and warned that the status quo cannot remain. “If things remain the way they have been to date in the transition, then next year’s celebration there will be a disaster.”

As the sun set on Friday, families and young men streamed into Martyr’s Square, which was renamed after Tripoli fell to the rebels. Instead of celebratory gunfire — a common occurrence in the country, where weapons leftover from the civil war remain in free circulation — fireworks lit the sky. A sign hanging on a tent in one corner of the square read, “Yes to Political Isolation,” a slogan for a campaign to ban officials who served in the Gadhafi regime from holding positions of leadership in the future political and security institutions in the country. Some link the issue of former regime officials maintaining their pre-revolution posts to the string of assassinations of security officials in Benghazi last year and to divisions between armed groups in that city who have conflicting visions for how the oil-rich territory should be secured and governed. At the same time, after 42 years of dictatorship defined by vast patronage networks and a sizeable class of Libyans employed by the Gadhafi regime, Libya lacks a class of politicians or leaders that are untainted by past affiliations with the regime.

Some citizens interviewed by Al-Monitor said that the early celebrations of the revolution anniversary are arguably a poor indication of positive security or political developments in the transition. Likewise, some said the mood was not a good indication of any improvements in or resolution of the divide between the Eastern and Western regions of the country.

"During a time like this, people identify with Libya (as a whole), but underlying that there’s an East-West current where people from the East seem themselves on the other side of the fence from the Westerners,” said a young doctor from Tripoli who has family from both the Eastern and Western regions of the country and asked for his name not to be used given the sensitivity of the issue.

“In the revolution, the East-West rift wasn’t important,” the doctor said. “People don’t forget how they came together to fight Gadhafi, but now they have gone back to the old issues. After the revolution, these divisions exist because they have been here for 42 years,” he said.

Whether this and other rifts among Libyans will be mended in the “new Libya” remains to be seen, but the transitional government has not yet proven effective in building the core institutions that the country needs to move forward.

Maggie Fick is a freelance journalist based in Cairo, Egypt.