A group of Gadhafi-regime supporters say they were on a peaceful mission in Libya when they were arrested and accused of planning violent acts to destabilize Tripoli. 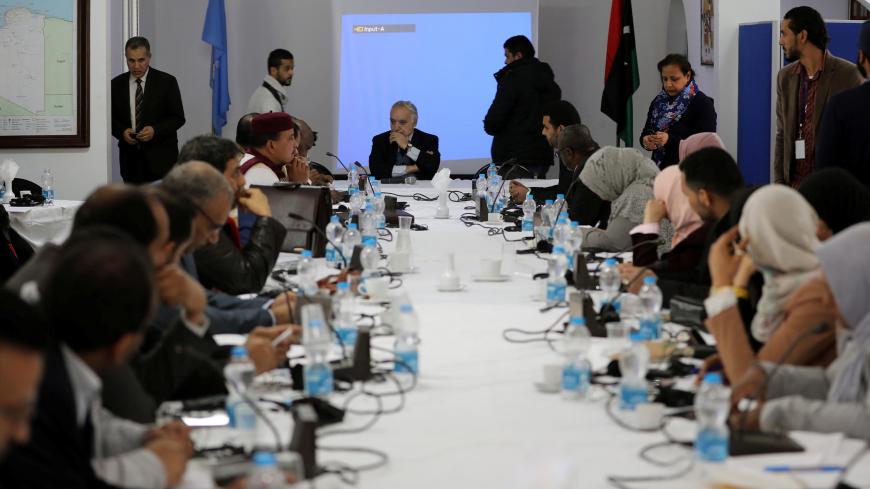 TRIPOLI, Libya — On May 20, seven Libyan men — some of whom were high-ranking military officers under the former Moammar Gadhafi regime — arrived in Tripoli from their self-imposed exile in Cairo. None of them would have openly set foot in Tripoli unless they had been assured their safety was guaranteed in the Libyan capital, which they hadn't visited since Gadhafi's regime fell in 2011.The group of three former military officers, three activists and one university professor had been invited to attend a reconciliation meeting in the capital hosted by the different militias that are the de facto power brokers in western Libya. One of them, Naji Ahrar, had been a brigadier in the former Libyan armed forces.

While in exile, the men joined one of several political groups set up in Cairo and Tunis. Such groups broadly define themselves as representatives of the former regime’s political agenda, which opposes foreign intervention in the country, particularly the NATO military intervention in the 2011 civil war.

The men have, in the past, repeatedly expressed their political opposition to the so-called February Revolution of 2011, but their opposition apparently has remained peaceful as they seek discussions to salvage the war-shattered country that is on the brink of partition — if not disintegration. To this end, they attended reconciliation meetings organized and attended by the United Nations special envoy to Libya, Lebanese Ghassan Salame, in Cairo on April 29 and Geneva on Feb. 15.

In Tripoli, the men attended a May 21 meeting with influential, diehard revolution supporters and militia leaders. According to the available details, the meeting took place near Tripoli’s destroyed airport just south of the capital. However, at some point in the meeting, something went wrong. Another militia, known as the Special Deterrent Force (SDF), intervened and took the men to jail, accusing them of plotting actions to further destabilize Tripoli and of possessing arms and explosives. The SDF also accused them in a statement on its Facebook page of links with local sleeper cells with the same agenda. As the men are still in detention, little else is really known about what happened.

Details of the arrest, the meeting and the hosts of the meeting are sketchy. However, this incident, little-covered by the media, seems to poison the whole idea of reconciliation in Libya and throw in doubt the efforts of the UN envoy, whose declared priority is to develop reconciliation ideas as a prerequisite for helping to pull Libya from the brink. Local city meetings aimed at reconciliation have been taking place in Libya during the past few months, gearing up to presidential and legislative elections that are planned for sometime this year — though no specific date has been announced so far.

The seven arrested men are said to be working under the umbrella of the Popular Front for the Liberation of Libya (PFLL). The group's honorary head is Saif al-Islam Gadhafi, the late leader’s son. He has been imprisoned and released in various Libyan jurisdictions in the past despite being sentenced to death in absentia at one point in Tripoli. The International Criminal Court recently renewed calls for his arrest on charges that he committed international war crimes in 2011.

Yet the group said in March that the son plans to run for president and will present his platform later. The PFLL says it seeks to participate in political talks to shape a new Libya based on free elections and national inclusive reconciliation aimed at ending violence.

The issue of the PFLL members' arrest is still puzzling, but many political leaders believe the members were led into a trap under the guise of a goodwill meeting.

Said Rashwan, a prominent leader in the National Popular Front, another group that supported the former regime, said from his self-imposed exile in Cairo, “The men went to Tripoli because of arrangements [to] attend talks aimed at national reconciliation.”

Rashwan appeared to accuse the Tripoli-based Government of National Accord of being involved in the arrests. “Official parties in Tripoli are responsible for this kidnapping of the seven men," he said.

What happened will certainly play negatively with former regime supporters. The incident comes only few days after a large conference of national reconciliation was organized in Benghazi in which former ministers took place for the first time.

The incident will only make people who are still loyal to Gadhafi more hard-line, which is likely to disrupt any efforts the UN is still making to get Libyans to talk to each other before the elections.

It will also be taken as a clear sign that those in control in Tripoli aren't trustworthy, serious about dialogue or committed to nonviolent approaches to tackle the multitude of complicated issues that have arisen since the 2011 revolution.