Libyans are going to the polls in less than a month to elect their first-ever president, and two women are in the running. 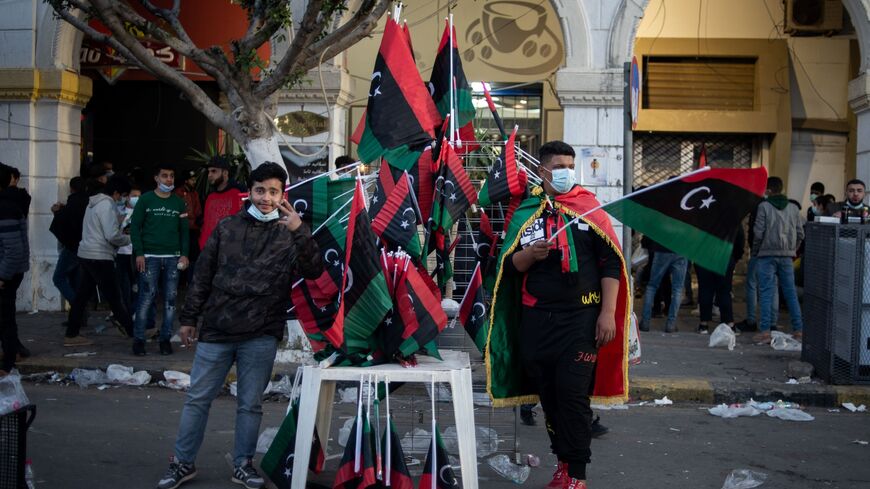 Men sell flags during a gathering to commemorate the tenth anniversary of the Arab Spring in Martyrs Square on Feb. 17, 2021 in Tripoli, Libya. - Nada Harib/Getty Images

Libyans are going to the polls to elect their president for the first time. By Nov. 22, the deadline for submitting candidacy papers, the total number of people running for the country's top position reached 98 individuals — in a country of 6.5 million people and less than 3 million eligible voters.

The field includes personalities from all walks of life, including Libya’s top comedian, current and former prime ministers, and former and current parliament speakers. The late Muammer Gaddhafi’s son, Saif Al-Islam, his father’s former secretary, Bashir Saleh, and a Gaddhafi-era minister all have joined the race. General Khalifa Hifter, the dominant force in eastern Libya, also hopes to win the presidency through the ballot box.

But on Nov. 24, the High National Elections Commission (HNEC) disqualified 25 candidates, reducing the list to 73. Different reasons were listed against each rejected candidate, including judicial issues and dual citizenship of another country, which Libyan law does not allow for any public officeholder.

Candidates’ vetting process and background checks are carried out by different state departments such as the Prosecutor General’s office, the Passport Authority, the Criminal investigation Department, and the secret services. For example Gaddhafi and Saleh, were disqualified because they were both found to have a final court verdict, contravening a clause that bars any convicted person from standing for elections.

Two women stand out among the crowd: Laila bin Khalifa and Honeda Tomeya. Both are making history by becoming the only two women candidates in the first ever presidential elections since the country gained independence in 1951.

Tomeya introduced herself as a social sciences researcher. In her statement she called on “all political actors and presidential contestants” to respect the outcome of the polls.

Bin Khalifa, the first woman to submit her application, said “I dream of changing Libya.” She is a known activist and has history of campaigning for more women to enter the political life. She has, in the past, focused on the idea of quotas for women in elections. Bin Khalifa is also the leader of the Libyan National Movement, a small political party. She is originally from Zwara, a small city close to the Tunisian borders with majority Amazigh population. A women from a minority running for president is also unprecedented.

She also pointed out that the presidential elections law “does not provide any quota for women contestants.” The fact that political parties are not taking part in the elections, she said, means “there is no way to impose any quota” for women.

Saleh Hassan, a retired lawyer from Benghazi in eastern Libya, pointed out that “quota in elections means women needed men’s support.” He added that “special provisions for women in elections” means women will always need help from men.

In a patriarchal society, like Libya, women on their own cannot make themselves heard unless they have the support of the men; a fact recognized by Bin Khalifa.

She appeared in a video clip, after registering for the polls, saying “I have the support of many men and I cannot do anything without them.” In the same clip she also highlighted her struggle with the current and previous parliaments to include more women in political representation.

Prime Minister Abdul Hamid Dbeibah, promised to have at least 30 percent women in his cabinet, but his government has only three women ministers. Bin Khalifa said that was “disappointing.”

The new legislative elections law does require that 16 percent of the seats be filled by women. But it does not openly allow political parties to contest the elections planned to take place sometime after the presidential elections on Dec. 24.

In any case this new law is “progressive compared to the previous one,” which gave women 10 percent of the seats, says Nuria Hussain, a lawyer from Tripoli. Still, this is below what the current caretaker government pledged in March.

Many Libyan women believe their situation is going to improve as the country progress in its democratic transition. Salem Hamza, a government consultant, says the election laws might be disadvantageous to women now “but remember we are only ten years into this new Libya.”

Before 2011 there were no elections in Libya at all. However, Hamza pointed out that “women must get more involved” in local politics. He thinks women’s success “at the national level starts at the local level.” There are no female members in dozens of local councils in small towns and rural areas. Even Tripoli’s municipal council has no women members.

Almost all women campaigning organizations in Libya are very recent, lacking resources, experience and proper training. Hasna, a teacher in Misrata, who does not want her family name published, told Al-Monitor, “in Misrata there are almost no women in the public sector, let alone in politics.”

Misrata, Libya’s third largest city, is very conservative, even by Libyan standards, and female participation in any public activities is occasional at best. Hasna thinks all governments over the last ten years “have done very little for women.”

She points to the current female minister of justice and ask “what did she do for fellow women? Nothing.” Hasna also cites the Foreign Minister, Najla Al-Mangoush, and says “her own ministry is dominated by men” but many women in that ministry “ never make it to higher levels.”

In Libya, where traditions and religious conservatism still dominate life, women still have a long way to go to be fully integrated in politics. Another barrier has been the violence directly linked to politics. Many women have paid with their lives for speaking out about political issues, which is still fresh in the minds of many women.