Foreign Minister Najla al-Mangoush said the Dec. 24 elections could be postponed if lawmakers fail to agree on the electoral law. 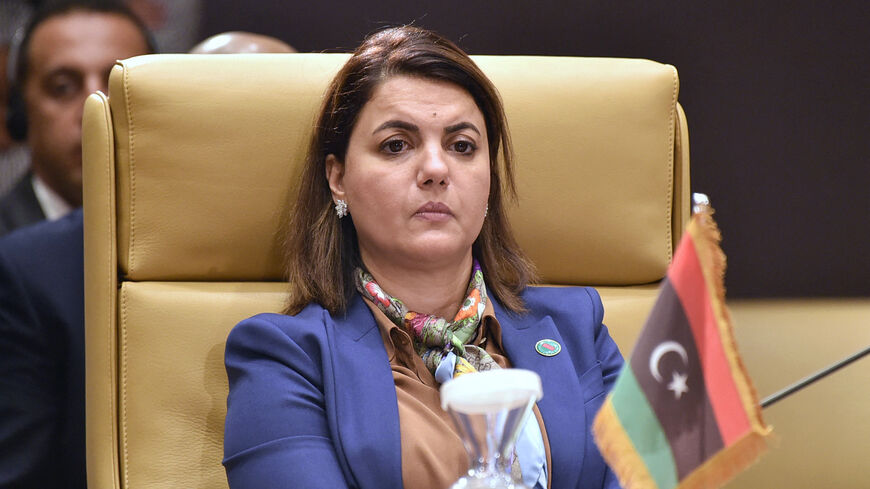 Libya's Foreign Minister Najla al-Mangoush attends a meeting of Libya's neighbors as part of international efforts to reach a political settlement to the country's conflict, in the Algerian capital Algiers, on Aug. 30, 2021. - RYAD KRAMDI/AFP via Getty Images

Libya's foreign minister hinted on Tuesday at the possibility that nationwide elections scheduled for the end of the year could be postponed if lawmakers in the North African country fail to agree on a legal framework.

“As a government, we have put in place everything required to move towards elections, providing financial, logistical and material support to the elections commission,” Foreign Minister Najla al-Mangoush told reporters in the Algerian capital Algiers on Tuesday.

“I cannot answer whether the elections will be postponed or not, but we are trying to ensure they will be held on the scheduled date,”' AFP quoted her as saying. “We are still waiting to see if parliament will approve the electoral law. … This could block or postpone the election.”

An interim government led by Prime Minister Abdulhamid Dbeibeh took office in February and is tasked with preparing the country for general elections set for Dec. 24, the anniversary of Libya’s independence in 1951. But the 75-member Libyan Political Dialogue Forum has yet to agree on a framework for the presidential and parliamentary elections.

The elections are an attempt to unify Libya after six years of civil war and an uprising that overthrew and killed longtime dictator Moammar Gadhafi. An October 2020 cease-fire brokered by the UN Mission in Libya paused the fighting between the internationally recognized Government of National Accord and Khalifa Hifter’s Libyan National Army.

On Monday, UN envoy to Libya Jan Kubis called for Libyans to finalize a road map for "smooth, safe, secure, inclusive, free and fair elections with the results accepted by all.”

"We need a legal framework," Kubis said during a regional summit in Algeria. "The members of parliament are now trying to finalize the electoral law and time is running out.”

The two-day summit hosted by Algiers ended with a call for foreign fighters to depart Libya. The UN-backed cease-fire gave countries 90 days to withdraw their proxy fighters, whose presence is a violation of the UN arms embargo that has been in place since the toppling of Gadhafi in 2011.

As of December, the UN estimated there were at least 20,000 foreign fighters and mercenaries remaining in Libya, including from Russia, which supports the LNA, and Turkey, which backs the GNA.