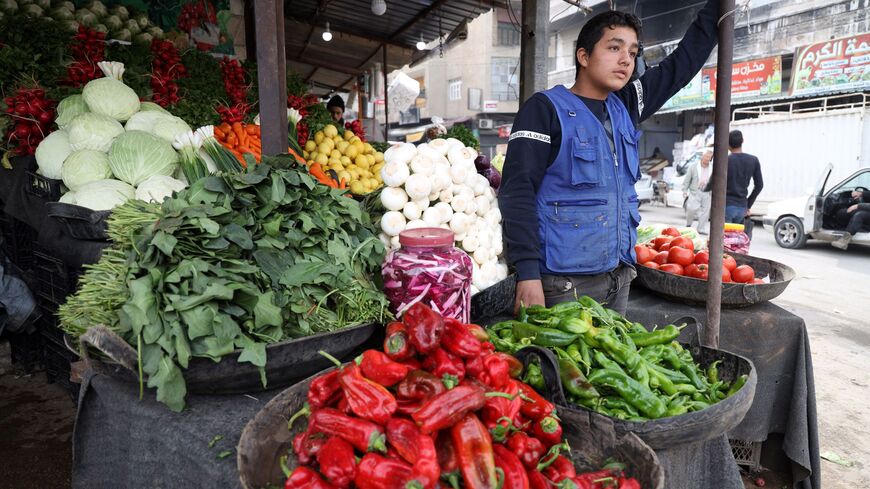 Vegetables are displayed in baskets made out recycled tires, at a market in the northwestern Syrian city of Idlib, on Nov. 14, 2021. - MOHAMMED AL-RIFAI/AFP via Getty Images

ALEPPO — A food market has been opened in the city of Sarmada, north of Idlib, under the control of Hayat Tahrir al-Sham (HTS). The opening ceremony, which was held Dec. 12, was attended by officials from the HTS Syrian Salvation Government and the Ataa Humanitarian Relief Association, which implemented the project with funds from the Qatar Charity Foundation.

The market is expected to employ a number of unemployed people and provide consumer goods and vegetables of good quality and at cheap prices for city residents, whether from the region or displaced from other Syrian regions.

The market houses 50 shops selling vegetables and food supplies. A Sarmada-based official from the Ataa Humanitarian Relief Association told Al-Monitor on condition of anonymity, “The market aims to receive the agricultural products of Idlib’s farmers while getting rid of congestion and sales violations in the city center. The market also seeks to meet residents’ needs at reasonable prices, as it increases job opportunities and competition and reduces monopoly.”

The official also said that the market provided a financial grant to the 50 shopkeepers. He did not disclose the size of the grant. The market is another part of the association's effort to support farms, along with pesticides, fertilizers, diesel to fuel irrigation pumps, and training and education.

The owner of a vegetable store in the new market told Al-Monitor on condition of anonymity, “I hope that the market will attract a high turnout in the coming period and that it will turn into a shopping destination for the Sarmada residents and the displaced Syrians spread in camps all around the city. We feel people’s suffering because of the high prices, poverty, unemployment and the low purchasing power.”

An official in the HTS Salvation Government told Al-Monitor on condition of anonymity that Sarmada now houses more than 200,000 people, due to the influx of refugees, and that markets outside the city reduce congestion and satisfy people’s need for materials and food commodities at acceptable prices.

HTS, the de facto ruling authority in Idlib, is encouraging and supporting development projects while paving the way for infrastructure investments in its areas of control. If Idlib residents feel that HTS has started working on reconstruction projects, it helps HTS garner political support and grow in popularity while facilitating the transition from chaos to an institutional state.

This is what the HTS leader Abu Mohammed al-Golani is seemingly aspiring to achieve, as he stressed during a speech in November before the General Shura Council the need to develop the commercial and agricultural sectors while creating job opportunities.

HTS, which began as an Al-Qaeda affiliate, is designated by the United States and the UN Security Council as a terrorist group.  Golani has been on a policy and public relations campaign over the past year to consolidate power in Idlib and distance HTS from more radical groups.

“HTS is trying to show Turkey and the international community that it has come to believe in … the need for the conflict in Syria to come to an end through a political solution, to which it must be a party," Sukari added. "Therefore, it is only normal for HTS to facilitate the work of organizations because this supports the narrative of reform and construction and the long-term project of Golani in Syria.”

“Any government in the world seeks to promote itself, be it internally and externally, and the economic aspect is known to be one of the aspects that boosts confidence in governments," Istanbul-based economic researcher Yahya al-Sayed Omar told Al-Monitor.  "Additionally, the expansion of economic activity in the areas under HTS control affects it positively in terms of income taxes.”

But, Omar concluded, “The actual need at present is for productive sectors and not for services, as the region’s output is proving to be very low. While the market will have an impact on the population, this impact will remain unfortunately low."