How Syrian jihadi group is laundering money in Idlib

Hayat Tahrir al-Sham leaders in Idlib are investing their money in various economic sectors, as part of money laundering operations to control resources and economic activity in their areas of control. 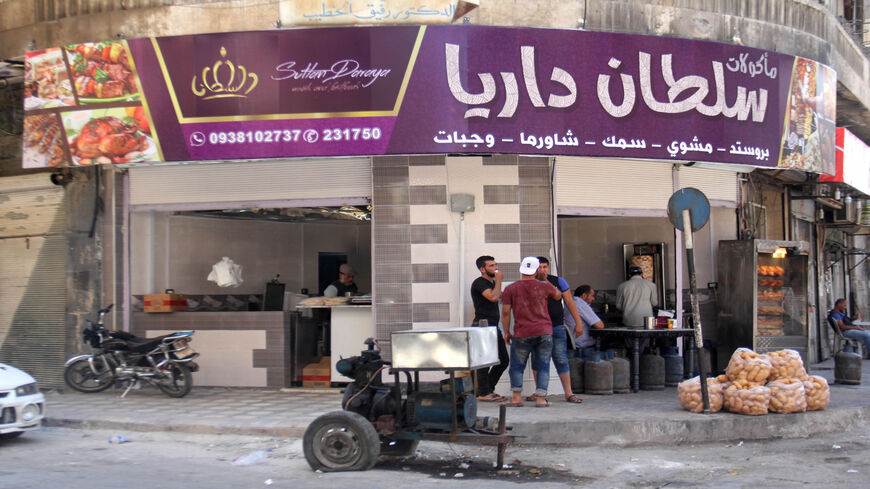 ALEPPO, Syria — Prominent leaders in Hayat Tahrir al-Sham (HTS), which controls Idlib and its surroundings in northwestern Syria, are seeking to invest their money in various economic sectors in the area. It seems that these efforts, which could amount to money laundering operations, are encouraged by the HTS leadership, which wants to have various sources of support to help it survive and increase its power and influence.

On July 28, dozens of residents of the city of Darat Izza, northwest of Aleppo, protested against HTS and its affiliated Salvation Government, after the latter issued a decision to close the popular market in the city center in order to build a shopping center instead.

The protesters demanded the release of detainees who were arrested by HTS when a group affiliated with it attacked the market area with the aim of implementing the decision and forcing the merchants working there to evacuate their shops.

The owner of a shop in the popular market in downtown Darat Izza told Al-Monitor on condition of anonymity, “The administration of the northern area in the Salvation Government affiliated with HTS issued a decision in late July to close the popular vegetable market in the city center. It wants to demolish it and build a shopping center instead. This market is one of the oldest markets in the city, and has been a source of livelihood for dozens of people during the past few decades.”

He said, “The market workers — most of whom are vegetable sellers — were told that they should leave the market. But they refused because they have no alternatives. They would be losing their livelihoods while the rich HTS warlords get richer. So an armed group affiliated with HTS [raided the market] and arrested 10 people, after which the workers protested and demanded the release of the detainees, while denouncing the practices of HTS and the Salvation Government.”

He added, “It seems that the Salvation Government and HTS will move forward with their decision. The shopping center that is supposed to be built in the place of the popular market will be implemented by a number of prominent leaders and [leaders] in HTS. It will be their property, so I don't think the protests will succeed in preventing this disaster where dozens of families will end up losing their livelihoods.”

Following the protests, tension prevailed as HTS attempted the next day to calm the street by justifying its decision. The Salvation Government’s administration in the northern area issued a statement July 29, saying that it will be transferring the market’s vegetable stands to another location, at the request of notables and activists in Darat Izza. It explained that it aims to establish a public square where pro-revolution festivals and events can be held, noting that it only wanted to organize the randomly erected stands and beautify public facilities in the city.

“A meeting was held under the auspices of the administration with those who objected to the decision in the presence of notables from the city. We clarified the details of the project and all parties agreed to relocate after the local council equips the square,” the statement read, which means the decision will be implemented and the market workers will have to leave.

One of the local notables told Al-Monitor on condition of anonymity, “HTS exercises its tyrannical authority in Idlib and the western countryside of Aleppo and works — through its Salvation Government — to confiscate public property and help its leaders take control and establish their own businesses, disregarding the harm they cause to many of the poor.”

He noted, “The popular market in Darat Izza is a cultural landmark and is part of the history of this city. It is hundreds of years old and one of the oldest symbols of the city. It will now be demolished so a few HTS leaders can increase their wealth. The justifications provided by the administration of the northern area are incorrect; if the goal were to beautify the city, it can work on simply organizing the market instead of depriving the poor of their livelihoods and arresting them if they refuse to leave the market.”

HTS leaders invest their money in various economic activities, mostly in housing construction due to the increased demand for it, in addition to investing in the entertainment sector such as restaurants, cafes, parks and shopping centers. They also invest in raising poultry and livestock, stone quarries that manufacture building materials, car trading, money exchange, money transfers and gold trade. The majority of investment operations and projects owned by HTS leaders are carried out through civilian intermediaries close to the leaders, who act as fronts behind which the real investors hide.

A former commander in the Free Syrian Army told Al-Monitor on condition of anonymity, “Abu Ibrahim Salama, who previously held the position of emir of Aleppo in HTS, is today the man that HTS leader Abu Mohammed al-Golani relies on in managing investment projects in Idlib. Salama now runs Al-Raqi Construction Company, and this company has seized vast areas of hills and rocky mountains suitable for the manufacture of building materials in Idlib, which are state property.”

He added, “Bayt al-Karam restaurant in Idlib and Al-Madina restaurant and other restaurants and cafes are owned by HTS leaders, in addition to several projects in the livestock sector, agriculture and car trade. HTS leaders also use traders affiliated with them in the trade of gold, clothing, fertilizers, cement, and others.”

Abbas Sharifeh, a researcher at the Istanbul-based Jusoor Center for Studies, told Al-Monitor, “HTS is trying to impose its total dominance over the sources of wealth and economic activities in Idlib, and this gives it more power and influence. It ensures its survival thanks to the diversity of sources of revenue. HTS also backs projects that contribute to laundering money for its leaders who hide behind civilian fronts, and they are often traders who are used to managing these projects. [HTS leaders] rely on these traders for fear of being targeted by international sanctions.”