Hayat Tahrir al-Sham is seeking to organize media and advertising fields to serve its interests and the inclinations of its affiliated Salvation Government in Idlib in northwestern Syria. 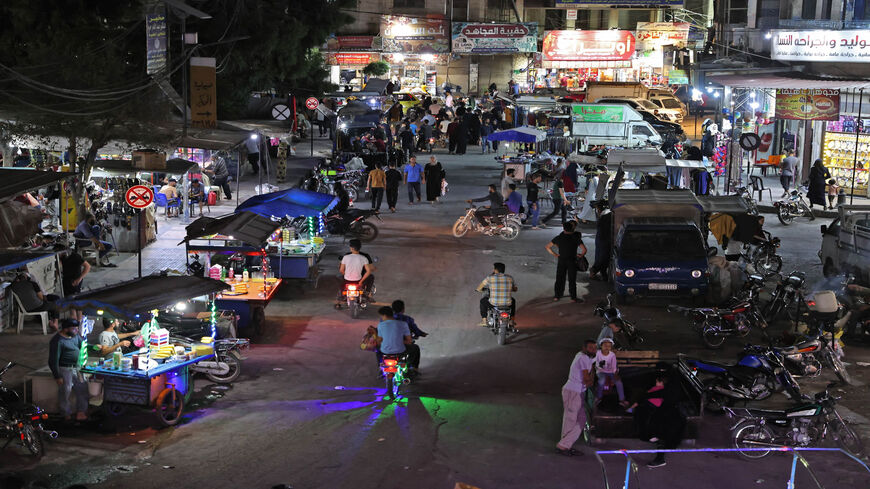 This picture shows a view of nightlife ahead of the Muslim holiday of Eid al-Adha at the Clock Square, Idlib, Syria, July 18, 2021. - Omar Haj Kadour/AFP via Getty Images

ALEPPO, Syria — The Hayat Tahrir al-Sham-affiliated (HTS) Salvation Government continues its attempts to dominate and acquire the different advertising companies and other vital sectors in its areas of control in Idlib in northwestern Syria, through its affiliated directorates and ministries and through emerging companies in various sectors led by parties close to HTS.

On Nov. 9, the Idlib City Council of the Ministry of Local Administration and Services in the Salvation Government issued a decision to remove all signs from public roads. The decision required all of those with signs posted on electricity poles along the public road between al-Mutanabi roundabout and al-Koura roundabout in the center of Idlib city to remove all advertising boards within a week in order to start the process of lighting public roads. The electricity poles are used to carry power lines as well as to mount street lights.

An employee in Idlib City Council told Al-Monitor on condition of anonymity, “The decision to remove banners and advertisements from some streets in Idlib is part of a general plan in all areas of Idlib managed by the Salvation Government. The implementation of the plan began about two months ago, and it aims to improve the aesthetic appearance of roads and public squares, as well as to end the absurd spread of advertisements and visual pollution."

He said, "The plan to remove all kinds of road advertisements also aims to invest in this sector, meaning that advertising in Idlib will be restricted to one company chosen by the Salvation Government.”

The Ministry of Local Administration in the Salvation Government previously talked about its efforts to combat audio-visual pollution and the erratic spread of road and advertising signs, and said in a July 7 statement that it “has announced a tender to solicit bids to restructure and take care of road signs in the liberated area” — in the areas of Idlib affiliated with it, which are under the control of HTS.

The Salvation Government added in its statement, "After announcing the tender twice, the private company Creative Inception for media production and advertising was selected. It is the body authorized to sponsor and organize road signs and advertisements and has the right to monopolize hanging signs on public roads and within cities.” Creative Inception is a Syrian company headquartered in the city of Sarmada in the northern countryside of Idlib, which is close to the Bab al-Hawa border crossing with Turkey.

A jihadi source opposed to HTS in Idlib told Al-Monitor on condition of anonymity, “The private company Creative Inception for media production and advertising is directly affiliated with HTS. It was established in 2020, based on a plan developed by HTS to infiltrate into the civilian ranks in Idlib and control the media and advertising sectors. This brings great financial gains to the Salvation Government and HTS, in addition to allowing them to control and unify the media discourse in Idlib and direct it to support HTS and its government’s inclinations.”

He said, “Creative Inception is working to attract journalists and media activists in Idlib, especially new graduates from media institutes in opposition areas. It is offering them good equipment and training, in its attempt to build a large cadre and people with various specializations to develop the media work of HTS. We might see a revamped HTS image on its emerging media platforms soon.”

Creative Inception supports a variety of programs on its social media platforms and addresses local, economic and social issues in Idlib, and supports the inclinations of the Salvation Government. It specializes in entertainment programs, talks about political and military issues and conducts dialogues with opposition figures in the opposition areas in northwestern Syria and abroad.

An employee of Creative Inception located in Idlib told Al-Monitor on condition of anonymity, “The allegations about the company’s affiliation with HTS or the Salvation Government are untrue. It is a private and independent company that is not affiliated with any official body in Idlib.”

The jihadis who defected from HTS, and those affiliated with the Guardians of Religion Organization, which is affiliated with al-Qaeda in Idlib, say that HTS is trying to develop its media performance and improve its discourse to reflect a moderate image to the West. When HTS was fighting the extremist Jundallah organization in the Turkmen Mountains area in Latakia's northern countryside at the end of October, it allowed the entry to Idlib of a delegation of journalists working for The Washington Post, to convey a message to the West that it is fighting al-Qaeda-affiliated organizations and extremist groups, and is a friend of the international community. The visit was facilitated by the Idlib Media Center, which operates under HTS.

Researcher on Syrian affairs, Mohammed al-Sukari, believes that HTS is working to tighten its full control over the vital and influential sectors, and important pressure groups that threaten its structure and dominance over its areas of control in Idlib.

Sukari, who resides in Gaziantep in Turkey, told Al-Monitor, “The media sector is an independent pivotal authority that works transparently and actively on criticizing or evaluating public policies, as well as exposing violations. It seems that HTS leader Abu Mohammed al-Golani realized the necessity of dealing with all issues in a calm and political manner and directing the media in a way that serves the aspirations of HTS and does not harm the latter. HTS has worked to establish media platforms and companies specialized in this field and build an army of workers in this sector who adopt its ideology.”

He said, “Perhaps HTS will later try to completely take over this sector, control its inclinations and prevent anything that harms its public policies and the image that it wants to promote. As for the advertising sector — which has also been dominated — it is a profitable sector through which the media sector can support start-ups.”

Sukari concluded, “HTS sees itself transformed from an organization in a state of chaos to organizational and institutional work, and some leaders are actively working on the model of the local state, with calculated and precise steps, in the hope that this will raise its political balance."