The Syrian opposition fears the cross-border humanitarian aid mechanism will be replaced by cross-line aid deliveries amid accusations leveled at Hayat Tahrir al-Sham of trying to normalize ties with the Syrian regime and its allies. 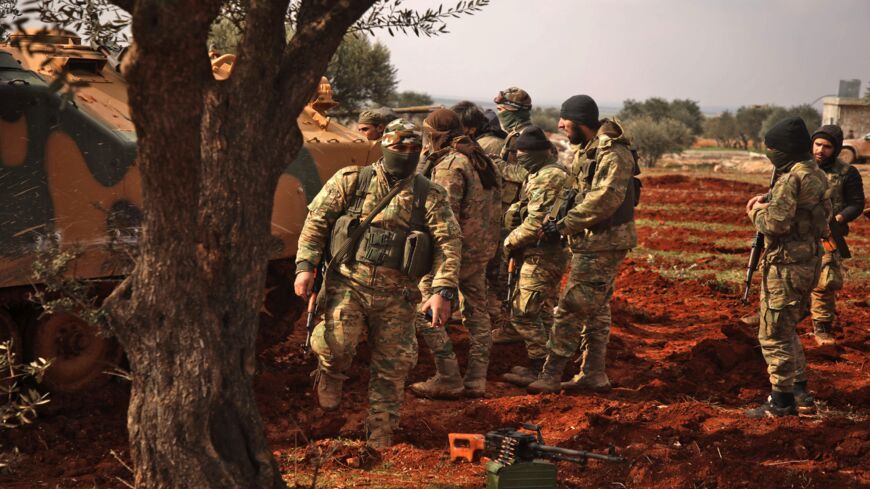 Turkish-backed Syrian fighters assemble in the village of Miznaz, on the western outskirts of Aleppo province, on Feb. 14, 2020. - AAREF WATAD/AFP via Getty Images

ALEPPO — The entry of humanitarian aid into Idlib via the Miznaz-Maarat al-Naasan crossing, which marks the frontier between territories held by the Syrian regime and Hayat Tahrir al-Sham (HTS) areas in the northwest of Syria, sparked widespread controversy among the opposition’s popular quarters. The move triggered fear of the cross-border humanitarian aid mechanism being replaced by cross-line aid deliveries. The opposition even accused HTS of betrayal and complicity with the regime and its allies for harming the revolution.

This step raised many questions about the contemplated gains the regime and HTS would achieve. On Aug. 31, a 12-truck aid convoy entered Idlib through the Miznaz-Maarat al-Naasan crossing in the eastern Idlib countryside.

A day earlier, the first batch of aid, loaded on three trucks, entered via the same crossing. The trucks were unloaded under the supervision of HTS and its Salvation Government in Idlib.

In an Aug. 31 statement, the Russian Foreign Ministry said, “Within the framework of the World Food Program (WFP), the first shipment of humanitarian aid, consisting of 9,600 food baskets, was transferred from Aleppo to Sarmada in Idlib across the conflict lines.”

The statement said the delivery of 27,000 baskets from the regime's government to the de-escalation zone is expected to take place by mid-September, which would help 50,000 civilians.

On Sept. 1, the HTS-affiliated Salvation Government said in a statement the WFP was sending 15 trucks carrying 12,000 food rations. The rations transferred from WFP warehouses represent an additional 5% of the total food supplied via the Bab al-Hawa Turkish border crossing. The statement seems to be issued as justification to curb mounting popular criticism.

In July, the UN Security Council extended its previously approved mechanism for the entry of humanitarian aid across the border into Syria for a period of one year through the Bab al-Hawa crossing. According to the extended resolution, the authorizations first laid out in paragraphs 2 and 3 of UNSC Resolution 2165 (2014) were extended for six months. That is until December 2022 for Bab al-Hawa crossing, only with the expectation of a subsequent renewal for another six months, until July 10, 2022, without the need for a vote.

Journalist Fadi Shubat, who works with the opposition-affiliated local news website Eqtesad, told Al-Monitor, “Syrians in opposition-held areas are afraid of aid entering through the conflict lines. They see this move as an attempt by Russia to prove the success of the regime and its institutions’ supervision over aid distribution and to subsequently push for the cancelation of the mechanism of aid entry across the border. This would confer control to the Syrian regime over humanitarian aid.”

In turn, Mamoun al-Khatib, journalist and director of Shahba Press Agency, told Al-Monitor, “This step is a prelude by HTS to normalize relations with the regime. Allowing the passage of this aid is proof that the entry of UN aid is possible through the Assad government. Most likely, when the time comes for a decision on the renewal of the cross-border aid mechanism in July 2022, the aid entry mechanism through Bab al-Hawa will be completely canceled and delivery of aid via the regime, i.e., across conflict lines, will be approved. This will further entrench ​​​​the legitimacy of the regime.”

HTS has been harshly criticized for opening the crossing to trucks coming from regime-controlled areas. The jihadis opposing it accused it of treason and trying to normalize relations with the Syrian regime and its allies, and of seeking to achieve its own gains as part of its continuous attempts to present itself as an open organization that has abandoned its radical inclinations.

On Sept. 3, a sit-in was staged at Atma refugee camps north of Idlib against the opening of the crossings with the Syrian regime. The protests, in which dozens participated, were organized by Hizb ut-Tahrir (Syria branch), a jihadi party opposing HTS.

A jihadi close to al-Qaeda-affiliated Hurras al-Din (Guardians of Religion Organization) and residing in Idlib told Al-Monitor on condition of anonymity, “By allowing aid convoys to enter, HTS is committing a crime against the mujahedeen. It is a great betrayal and a kind of recognition of the regime's legitimacy. HTS must be uprooted to rid the Syrians and the jihad of its evils.”

The mobilization of HTS members and their protection of the trucks coming from the Miznaz crossing provoked jihadis opposing HTS. HTS members deployed with their weapons, cars and patrols to protect the convoy. In 2020, HTS tried to open the Miznaz for commercial trucks between it and the regime. Its attempts failed as it faced popular anger and protests in the area near the crossing.

Mahmoud Talha, a journalist from the western countryside of Aleppo who works with Thiqa News Agency, told Al-Monitor, “HTS prevented a number of journalists and photographers from accompanying the aid convoy that entered Idlib from regime-held areas."

For his part, Mohammed al-Sukari, researcher of jihadi groups at the Jusoor Center for Studies in Istanbul, told Al-Monitor, “There is no doubt that shifting the passage of aid from the borders to the conflict lines will allow local key players, i.e., the regime and HTS, to achieve considerable gains.”

He argued the regime sees the issue of aid as a sovereign matter, which is why it sees UN Resolution 2585 (2021) as a great gain since it will allow it to impose its authority and work to restore its legitimacy. “Meanwhile, HTS is seeking to obtain international and international acceptance,” he said. “Coordinating with it (the regime) to bring aid through crossings under its control is tantamount to its recognition.”