Millions of Syrians are helplessly waiting in desperation as UN aid entry into Syria draws to an end amid expectations that Russia will veto a resolution authorizing cross-border aid into the war-torn country. 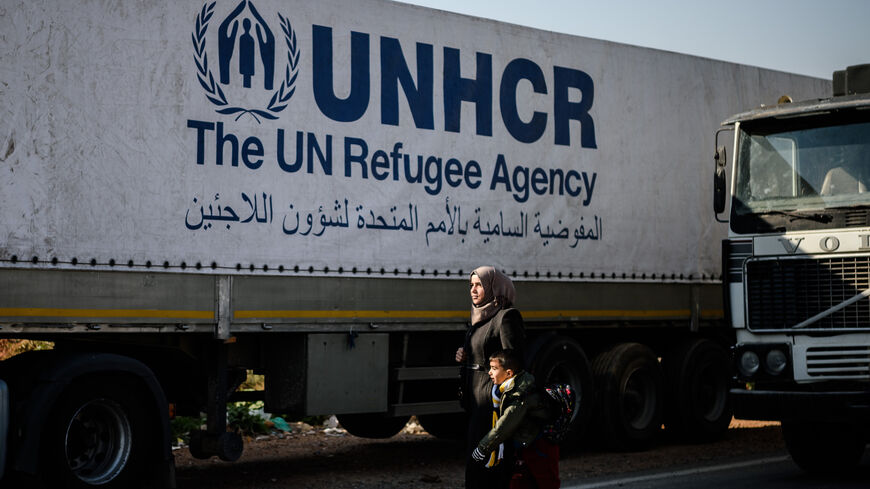 A Syrian woman with her child walks near a Syrian-bound truck loaded with humanitarian aid at the UN trans-shipment hub at Cilvegozu in Reyhanli near the Turkish-Syrian border in Hatay on Nov. 28, 2016. - OZAN KOSE/AFP via Getty Images

UN humanitarian aid trucks are queuing among olive trees on the road linking Turkey’s Hatay province with northwestern Syria, as they wait to enter the Bab al-Hawa crossing, which is the last crossing allowing UN aid to flow into Idlib, Syria’s last stronghold of extremist organizations.

The Bab al-Hawa crossing may close on July 10 when the UN resolution on cross-border aid into Syria expires, which may exacerbate the suffering of more than 4 million people living in the displacement camps in northwest Syria.

In a joint statement released on June 13, a group of Syrian nongovernmental organizations warned of the danger of Russia's use of its veto at the UN Security Council on the resolution to extend the entry of humanitarian aid into the Syrian northwestern areas, which are out of the Syrian government control, through the Bab al-Hawa border crossing with Turkey amid a growing social crisis in the area with the decreasing purchasing power of civilians there.

On June 20, US Ambassador to the United Nations Linda Thomas-Greenfield said during a UN briefing on the humanitarian situation in Syria that extending the current mandate of the aid mechanism through the Bab al-Hawa crossing is tantamount to a “life or death decision.”

For his part, Mark Cutts, UN deputy regional humanitarian coordinator for the Syria Crisis, told Reuters on June 29 that people living in northwest Syria “could die of malnutrition or lack of water if Russia vetoes UN authorization for cross-border aid.”

He added that one in three children suffers from malnutrition, with many relying on therapeutic feeding made possible thanks to cross-border aid.

In this context, Mazen Alloush, director of the media office at the Bab al-Hawa border crossing, told Al-Monitor that starting from July 10, more than 4.3 million civilians, including 1.5 million living in camps in northwestern Syria, are required to silently and patiently expect Russia’s new veto in the UN Security Council, which would lead to the closure of the Bab al-Hawa crossing and consequently stop humanitarian aid from flowing into Idlib province.

He added that these civilians will be forced to rationally deal with their inevitable death, as the international community surrenders to Moscow’s whims and proceeds to closing more humanitarian border crossings every year.

Alloush said that more than 43% of the camp residents suffer from water shortages, while more than 79% grapple with food insecurity amid a significant and continuous rise in food prices, leading thousands of families to slip into poverty as the humanitarian crisis in the area degenerates for the worse.

He called on the UN to transfer the Syrian humanitarian dossier from the Security Council to the General Assembly in order to stop the Russian exploitation of the dossier and end the blackmailing of civilians in the region.

He added that despite the weak humanitarian operations in the region, humanitarian aid still serves more than 2.6 million people, with women and children accounting for 65% of them.

This, Alloush said, comes at a time when Russia is seeking to close the Bab al-Hawa crossing as part of its efforts to transfer that aid to areas under the control of the Syrian government and then proceed to have it flow through internal crossings into the northwestern regions of Syria. Through these crossings, 71 trucks loaded with 1,398 tons of food were able to flow in. However, he said, these figures are to subsequently drop to very low levels if Russia manages to divert humanitarian aid to the lines of contact.

Despite the entry of thousands of relief trucks into the Syrian territories, Alloush said that the economic situation and the noticeable increase in humanitarian needs caused a major deficit in humanitarian response operations in the camps, which could further deteriorate when the Bab al-Hawa crossing is closed on July 10.

Alloush went on to say that while the UN talks about the lack of solutions to keep the border crossings open and says that the resolution is unlikely to pass, “We are still watching the UN agencies pump millions of dollars into many projects in the Syrian government areas amid a complete absence of such type of projects in northern Syria.”

Abu Muhammad, a pseudonym, is one of the directors of Al-Ghab camp for the displaced in the countryside of Idlib. He told Al-Monitor that the camp is home to more than 300 families, all of whom mainly live off of UN aid, and in the event the Bab al-Hawa crossing is closed, a major catastrophe will unfold. He said that a few days ago, they received hygiene aid and road repair tools through the Bab al-Hawa crossing.

Youssef Hammoud, displaced from the Idlib countryside and breadwinner for a family living in Al-Ghab camp, told Al-Monitor that if the decision to close the crossing materializes, he and his family will lose their source of bread, water, food and medicine, and will be completely besieged.

He added that after the people got displaced from their homes and lost their children and grandchildren, Iran and Russia now seek to deprive them of their most basic rights.

“I have an amputated leg because of the war and I cannot work. I am living off the aid we receive, and I have little children. I cannot bring myself to accept the fact that my wife will have to work while I sit idly by. If the border crossing is indeed closed, my wife, kids and I will starve to death,” he said.

The Syria Response Coordinators, an Idlib-based humanitarian NGO assisting the displaced in northwestern Syria, said in a statement posted on its Facebook page on June 13 that more than 4.3 million civilians, including 1.5 million people living in camps in northwest Syria, are silently expecting Russia’s new veto in the UN Security Council, which would lead to the closure of Bab al-Hawa crossing.

The UN Security Council adopted a resolution in 2014 authorizing for the first time the delivery of aid to northern Syria through four border crossings from Turkey, Jordan and Iraq, without the consent of the Syrian government. However, since 2020, three crossings have been closed with only the Bab al-Hawa crossing with Turkey remaining operational for UN aid deliveries.

About 800 trucks provide humanitarian aid to more than 4 million people in northwest Syria on a monthly basis. According to the UN, more than 80% of the population of northwest Syria relies on this aid mechanism.