Many Israeli Jews with Middle Eastern origins remember a painful expulsion from their homelands and want to preserve and celebrate the history of those Jewish communities. 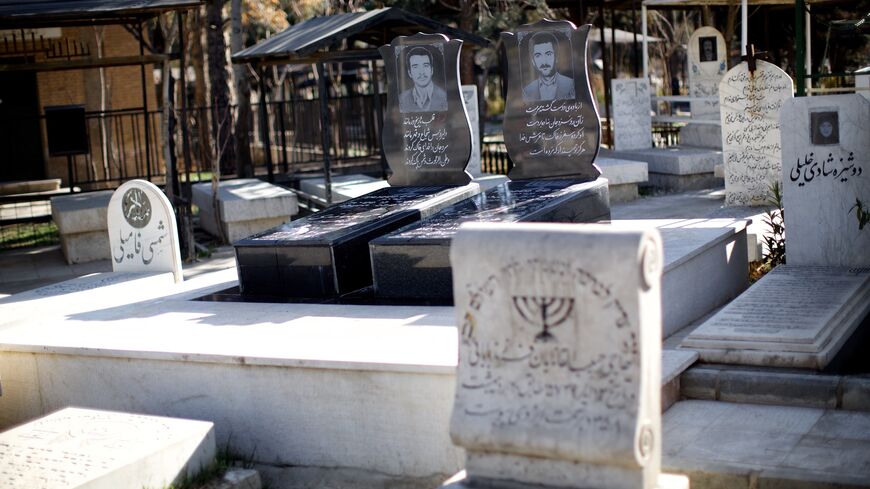 Two black stones mark the graves of Jewish-Iranian men who were killed during the Islamic revolution in 1979 (L) and during Iran-Iraq war (1980-88) at Beheshtieh Jewish cemetery in southern Tehran in this picture taken Jan. 9, 2015. - BEHROUZ MEHRI/AFP via Getty Images

Deputy Jerusalem Mayor Fleur Hassan-Nahoum is working to advance the construction of a museum dedicated to the heritage of Sephardic Jews. She told Al-Monitor, "There are several museums and foundations in Israel dedicated to Jews from the region. For instance, we have the excellent Babylonian Jewry Heritage Center in the town of Or Yehuda, dedicated to the heritage of the Iraqi Jewish community. We have the International Center for North African Jewry in Jerusalem. What we lack is a national museum, one run by the State of Israel, which will honor, commemorate and preserve the history and the traditions of Sephardic Jews and Jews from all Arab countries. I have been pushing this idea for some time now, and we have started inspecting plots, either owned by the Jerusalem municipality or state-owned land, that could potentially house such a project."

Hassan-Nahoum is also the co-founder of the UAE-Israel Business Council and very active on advancing trade and other relations between Israel and Gulf countries. She said that Israelis of Mizrahi origins should spearhead efforts to create future partnerships with the Arab world as well as preserve the history of Jewish communities in the Middle East, North Africa and Iran.

For many years, Israel neglected its Sephardic heritage and history. In 2014, the Knesset designated Nov. 30 as a day to commemorate the departure of Jews from Arab countries and from Iran, from which 850,000 Jewish refugees were displaced in the 20th century.

This year, for the first time, Israel’s president hosted the commemoration. Shimon Ohayon, who initiated the memorial day observance seven years ago, joined Social Equality Minister Meirav Cohen, chair of the World Sephardi Federation Haim Cohen, former Defense Minister Itzhak Mordechai and Hassan-Nahoum for what Hassan-Nahoum described as a moving ceremony. She noted that while President Isaac Herzog himself is not from a Sephardic family, his mother and his aunt were born in Egypt, a story he shared at the ceremony. They had to flee the country following the riots against Jews that erupted in many Arab countries after the establishment of the Jewish state.

A few days later, Deputy Foreign Minister Idan Roll hosted dozens of diplomats for a similar event. At the Babylonian Jewry Heritage Center, Roll noted, "The deportation of Jews from Arab countries and from Iran is an issue that is absent from the discourse over Israel and the region. Those refugees who have been deported deserve compensation or at least recognition."

Not all the memories are painful. Many Jews from Arab nations long to rekindle ties with homelands left behind and vice versa. For instance, there has been an enthusiastic response in Israel to Iraqi efforts to normalize relations between the two countries and foster new ties with descendants of the departed Jewish Iraqi community.

Another example is a first-of-its-kind meeting held Nov. 3 between Lebanon’s ambassador in Paris Rami Adwan and Jews of Lebanese origin living in France. Adwan is apparently close to Lebanese President Michel Aoun, who has a complicated history with Israel and is considered close to Hezbollah. And while the Jews invited to the Lebanese Embassy were for the most part French citizens, several of them have relatives in Israel or are connected to Israel in other ways.

Writer Albert Dichy left Lebanon at 23 when the civil war broke out. During his early years in France, Dichy strove to become part of his new homeland and its culture, but later on, he focused on Lebanese culture, literature and poetry, especially the heritage of the Lebanese Jewish community. Dichy told Al-Monitor he very much appreciated Adwan reaching out to Lebanese Jews, whatever his motives might have been. Asked about his own identity, Dichy said, "I am not one thing or the other. I am Lebanese, I am French and I am Jewish. I am all three at the same time."

An Israeli of Lebanese origin who spoke with Al-Monitor on condition of anonymity feels quite similarly to what Dichy described. "True, I feel first of all Israeli and Jew. But I also feel Lebanese. We are neighboring countries. Were it not for Hezbollah, I am sure there would be Lebanese politicians ready to reach out to us, Jews of Lebanon who live in Israel."