The third Jerusalem Biennale, themed "Watershed," brings together disparate streams of Jewish artists to offer their unique perspectives on evolving identities and the concept of a homeland. 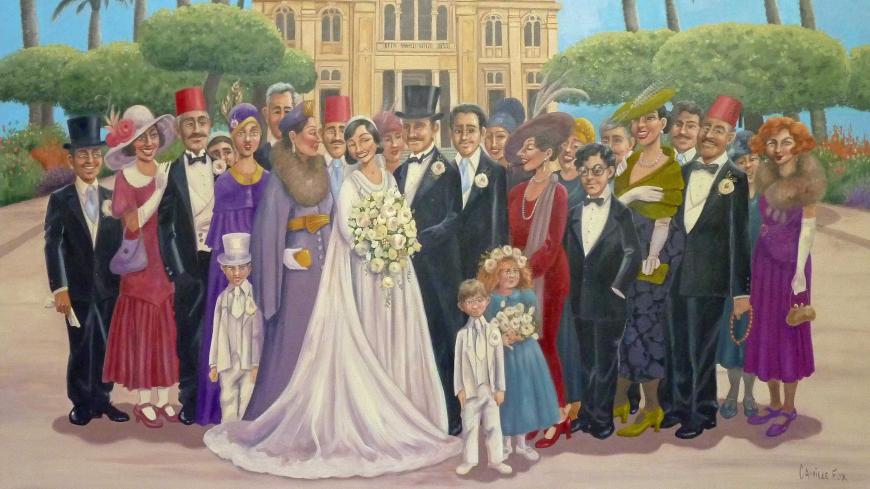 The third Jerusalem Biennale kicked off this week, and its theme, “Watershed,” feels fitting for Israel’s contested capital.

Jerusalem divides the spiritual, the political and even the meteorological. The city, which sits at the heart of the Israeli-Palestinian conflict, also straddles a ridge, meaning even its raindrops must choose a side.

The biennial, which spans 26 exhibitions and projects, is not only a celebration of modern Jewish art, but an exploration of physical divides. It is a deep dive into the watershed of Jewish migrations, in which clans, tribes and families came together and then split into two separate streams of existence.

“‘Watershed’ allows us to explore those points that we are a people and communities split from an identity point of view,” Rami Ozeri, the biennial’s founder, told Al-Monitor. “When you say ‘a watershed moment,’ you are talking about something that changed the course of history. That meaning is also coming into expression across the different exhibitions this year.”

The events run Oct. 1-Nov. 16 across Jerusalem at venues including the Tower of David Museum, the Bible Lands Museum, Hebrew Union College's Skirball Museum and the Polonsky Academy at the Van Leer Jerusalem Institute.

At the Bezeq Building, a low-rise industrial relic whose gritty rooms sport remnants of telecommunications equipment left behind by its former occupants, Nurit Jacobs Yinon has curated “Mamzerim,” a stirring look at the lowest Jewish caste of bastards.

At the Tower of David Museum, artist Lili Almog’s solo exhibition “The Space Within” explores Jewish women on the most extreme fringes of modesty, treating their heavy dark robes as a meditation on female dress, a plea for the liberation of the female body and an inquisitive look at the limitations of our own gaze.

A cluster of exhibitions together titled “People on the Move” studies the watershed moments of Jewish life over millennia of displacement and exile. At their heart sits “Homelands,” a quiet, stirring study of family ties and personal identity curated by Meirav Balas and produced by Lenore Cohen-Mizrachi.

Prior to the creation of the State of Israel, some 850,000 Jews lived in Arab and Muslim countries, including Algeria, Egypt, Iraq, Libya, Morocco, Syria and Yemen. They spoke Arabic in their homes, cooked traditionally Arabic foods and embraced the same dress, customs and manners as their neighbors.

When Israel was established, much of the Arab world turned on these Jews, prompting a massive outpouring of refugees. Most fled to Israel or the United States, where their descendants live today.

“When I started thinking about what Jewish art meant, for me it meant looking at my roots,” said Cohen-Mizrachi, a New York-raised descendant of Syrian Jews who in addition to producing “Homelands” has a piece in the exhibition.

She reached out to 13 other artists, representing six different origin countries, and arranged for all of them to meet in Jerusalem and discuss the watersheds running through their identities.

“What does it mean when you leave a home place?” she told Al-Monitor. “How does it affect an individual, and how does it affect a community? It’s like a national trauma. It affects how we self-identify as Jews, and of course all those questions of being both Arab and Jewish in our identity are particularly hairy.”

“Homelands” includes sculpture, video and mixed media art. From Camille Fox, who was born in Egypt, raised in Israel and now makes her home in Australia, there is the oil painting “Hope and Celebration,” featuring a bright 1920s wedding party outside Alexandria’s Eliyahu Hanavi Synagogue, with the kind of impersonal smiles often seen in wedding photos.

From Neta Elkayam, an Israeli with Moroccan roots, there is “Grandpa’s Life Line,” a triptych of sketches featuring the horizons of her grandfather’s three nations, lined up as one.

From Lida Sharet Massad, who immigrated to Israel from Iran as a child, there is "Gozascht" ("Let It Go"), a cracked plaster board studded with nails that spell out the Farsi word meaning to let go of something — be it a grievance, a material possession or an entire cultural heritage.

From Ghiora Aharoni, an Israeli who has created and copyrighted an alphabet that fuses both Hebrew and Arabic into one set of letters, there is “GER/The Stranger,” an assemblage sculpture featuring sacred Hebrew and Arabic texts swirling together across two glass spheres conjoined by salvaged Yemenite Torah finials.

And from Cohen-Mizrachi, a set of double-sided portraits on semi-transparent paper that merge, in the right light, to show former generations superimposing themselves onto current ones. Bits of 3-D Arabic calligraphy line its edges.

“I like the ghost images coming through,” she said to Al-Monitor of her work. “It’s very much about memory. What do you take with you when you stay and when you leave, what changes when you go through from generation and generation, from place to place, and what will be different.”