Jerusalem's deputy mayor responsible for international affairs, Fleur Hassan-Nahoum, is promoting a plan to develop an embassy district in the south of the city. 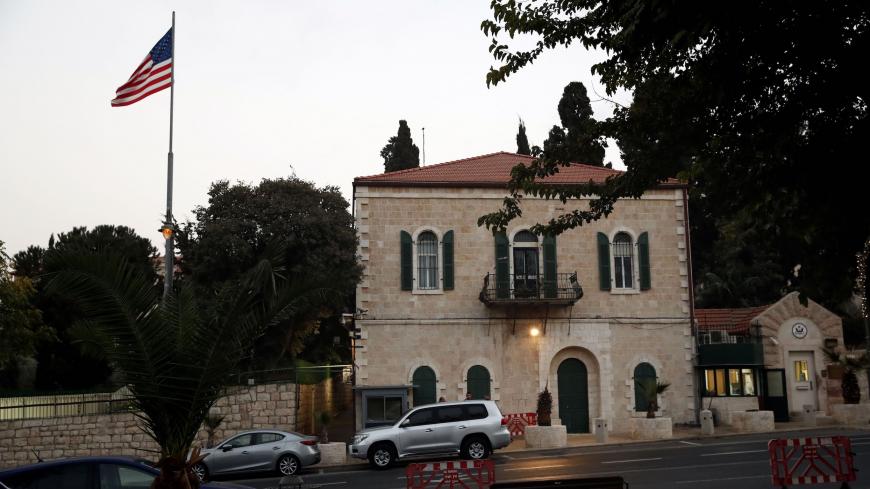 On Jan. 13, Jerusalem municipal authorities approved preliminary plans for the construction of a new US Embassy in the city. Jerusalem’s local planning committee authorized the expansion of the current temporary embassy site in the Arnona neighborhood as well as the construction of a new embassy compound on the nearby Hebron Road. The new site is near the Green Line that divides east and west Jerusalem. Both plans need additional approval from a district council but are expected receive it easily. Deputy Jerusalem Mayor Fleur Hassan-Nahoum, who has been deeply engaged in promoting the project, was the first to announce it on Twitter.

In 2017, President Donald Trump recognized Jerusalem as the capital of the state of Israel and ordered the US Embassy to be relocated from Tel Aviv. The new embassy opened in May 2018, but hundreds of Americans and Israelis employed by the embassy continue to operate from the Tel Aviv offices. To save time, Washington merged its consulate in Jerusalem with the new embassy, which now operates from the 19th century consulate building. A building which is simply too small to host all of the staff.

Jerusalem’s Mayor Moshe Leon called the construction approval a “historic and exciting moment,” saying he believes the move will inspire other countries to move their embassies to the capital.

Two days after the May 2018 opening of the new US Embassy in Jerusalem, Guatemala followed suit. Its embassy, inaugurated in the presence of President Jimmy Morales and Prime Minister Benjamin Netanyahu, is located in a new office building in the southwest of the city.

But it's not only Guatemala. Since the relocation of the US Embassy, several countries have opted to open trade and cultural missions in Jerusalem. Hungary, for instance, opened a trade mission in the city last year, though its foreign minister noted that the move does not indicate a change in policy and that his country does not recognize Jerusalem as the capital of the Jewish State. The Czech Republic said in December it would add a diplomatic presence to its Jerusalem consular office next year but the country is not planning to relocate its Tel Aviv embassy. Honduras and Brazil's presidents have both expressed support for relocating their respective embassies to Jerusalem, but no timetable has been set for either move. Foreign Minister Eisenhower Mkaka announced that Malawi plans to open an embassy in Jerusalem while visiting Israel last November.

The most recent country to express interest in a presence in Jerusalem is Kosovo. Upon establishing diplomatic relations with Israel on Feb. 1, Kosovo indicated it will open an embassy in Jerusalem. Such a move would make it the first Muslim-majority country to open an embassy in the city. During the Feb. 1 ceremony, Israeli Foreign Minister Gabi Ashkenazi unveiled a plate sent over by Pristina to be mounted on the wall of the new embassy. Kosovo authorities are hoping to hold an inauguration ceremony when coronavirus restrictions are eased, though shortly after the establishment of diplomatic relations, the European Union warned Kosovo against opening an embassy in Jerusalem.

For Hassan-Nahoum, who is also a co-founder of the UAE-Israel Business Council, the planning committee's approval is the first step on the road to a much larger plan to create an embassy district in the south of the city, anchored by the future US Embassy.

"The whole area behind Hebron Road has great potential. There is a lot of free space. Four hotels are already in the planning stages opposite the Jerusalem Promenade in the vicinity. It is a beautiful spot that is close to the east of the city, but still on the west. It all makes sense and could work out for everyone. I have spoken with urban planners and architects. They are all with me on that," Hassan-Nahoum told Al-Monitor.

Hassan-Nahoum noted that the opening of a new US Embassy will generate commercial activity in that area of the city. Hundreds of people would need coffee shops, hairdressers and apartments. "This is what happened in London when the Americans chose a not-so-central, not-especially-chic neighborhood for their new embassy. Nine Elms is becoming a vibrant development location with waterfront apartments, arts and high tech. We could have the same in Jerusalem."