The call by a Muslim Brotherhood official for Egyptian Jews to return to their homeland has stirred spirits in Cairo, but the Jews themselves question the sincerity of the proposal and its relevance, writes Jacky Hugi. 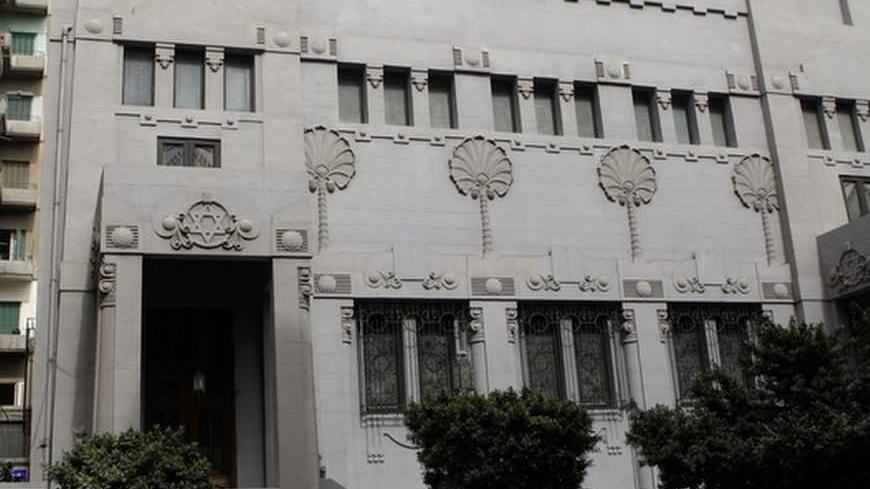 A synagogue that was the target of an attack is seen in Cairo Feb. 21, 2010. - REUTERS/Tarek Mostafa

The storm erupted at once, as if they were all waiting for it in Cairo. Dr. Essam al-Erian, [until recently] an advisor to Egyptian President Mohammed Morsi, was interviewed by a local TV channel and called on the Egyptian Jews who had immigrated to Israel to return home.

Dr. Essam al-Erian is a senior Muslim Brotherhood official and, in addition to his role as an advisor at the Egyptian President Bureau, serves as deputy chief of the Muslim Brotherhood's Freedom and Justice Party in the Egyptian parliament. Professionally, he is a physician specializing in diseases of the circulatory system. As a politician, he is well known in Egypt from way back, from the days of former President Hosni Mubarak.

“I hope that, God willing, the Jews will return to their homeland,” al-Erian told his interviewer, Hafez al-Mirazi, on the ON-TV channel. Al-Erian reminded his listeners that former Egyptian president Gamal Abdel Nasser was wrong when he persecuted the Jews and expelled them from Egypt in the first place. “Why did he have to persecute them? After all, the outcome of it all was that they joined in the occupation. I am calling on them and telling them: Egypt is your land. Why should you go on living under an oppressive and racist regime, a regime of occupation? Why should you be stained with crimes of war that the leaders of the occupying regime are going to be punished for?”

However, al-Erian was careful to qualify his statements and said that the return of the Jews would be possible only in the framework of a comprehensive solution for the Palestinian problem, which would assure in exchange the return of the Palestinian refugees to Palestine. A couple of days following that interview, al-Erian further commented on the issue, noting, “The end of Israel is already in the offing. This venture is not going to survive for more than 10 years.”

Well, it is a peculiar way of helping the Jewish sons of the motherland that the Egyptian physician has come up with. In any case, “Jew” is a dirty word in Egypt and statements of the kind made by al-Erian are just what is needed to stir a political storm. No wonder, then that his statements drew criticism from all sides.

One after the other, his colleagues in the Egyptian political establishment lashed out against him, pointing out that only a couple of days prior to the controversial interview, al-Erian had returned from a visit to the United States, where he had apparently been tainted by the American Jewish lobby.

However, above all, he was accused of letting the demons out of the bottle. The return of the Jews, it was charged, would reopen the issue of the property they left behind. And the last thing the Egyptians need in their current economic crisis, when they are struggling for every pound, is to be faced with the loss of a huge fortune to reparation. No one can precisely tell the worth of the private property the Jews had to leave behind. According to unconfirmed estimates, it amounts to $1.5 billion at the least. To that, one should add the assets of the Jewish community, including buildings, synagogues, archive records and holy books, which were all nationalized by the Egyptians at the time and which the Egyptian government is unwilling to return to anyone.

“My father, Victor Vidal, left behind a big publishing house in Cairo," says Levana Zamir. Zamir is the chairwoman of the Union of Egyptian Jews in Israel and president of the International Association of Jews from Egypt. She was born in Cairo in 1938 and at present, lives in Tel Aviv.

“I remember even the phone number of the business,” she recounts. “Other Jews, too, left behind real-estate properties, residential buildings and businesses. In 1948, a few weeks following the establishment of the State of Israel, a new law was passed in Egypt authorizing the Egyptian regime to seize the property of Jews who advocated Zionism. And this law was applied to the letter.”

Yet, the Jews from Egypt are known for their love of their ancestral origins and heritage. Emigrating from your homeland is one thing, but putting it out of your mind and heart is quite another, and far more difficult to do. It is especially hard in this case, bearing in mind that Egypt of the mid-twentieth century was a warm, embracing, multi-cultural country. However, it is rather in question whether the Jews who left it so much as think of returning to it.

“Al-Erian has proposed, in fact, the exchange of populations, so that his proposal cannot be regarded seriously,” Zamir says. “There were one hundred thousand Jews living in Egypt at the time. Half of them settled in Israel, while the others emigrated to various countries around the globe. Let’s say that here, in Israel, we number, together with our descendants, about 150,000, and let’s say that we will all return to Egypt. Would it be reasonable for Israel to agree to the return here of 4.5 million Palestinians in exchange?”

Avraham (Albert) Cohen, who serves as chairman of the Center for the Heritage of Egyptian Jewry, labels the initiative by al-Erian as “propaganda.” Cohen can boast a special kinship. He is the little brother of Eli Cohen, an agent of the Mossad who had been serving in Damascus and who was eventually exposed and executed there in 1965. Avraham was born in 1945 in Alexandria. His parents were originally Syrian Jews who emigrated to Egypt at the beginning of the twentieth century and settled in Alexandria. To this very day, the Israeli identity of Eli Cohen is denied in the Arab world, although he was acting on behalf of the Mossad.

“He is an Arab who has betrayed his motherland; a Satan, a traitor. It is in hell that he will find his redemption,” then-Syrian president Amin al-Hafiz said at the time with reference to Cohen.

“What al-Erian actually meant to tell the Jews is: 'Come back here, so that the Palestinians would be able to return to Palestine,'” Cohen says. “However, none of the Jews who immigrated to Israel from Egypt are prepared to go back there, and he is well aware of it. If he is at all serious about it, let him return the property first.”

At the height of the storm, al-Erian apologized for having criticized the late president Nasser. Cohen maintains that the apology is insincere, as Nasser did persecute the Jews, saying, “My brother Eli was expelled from Egypt in 1957 for no other reason than being a Jew. Many other foreign residents were also driven out of Egypt at the time, along with the Jews.”

Cohen discloses that many of the Jews living in Egypt then did not have Egyptian citizenship.

“They were holding French or British passports. Some of them had emigrated to Egypt from Syria, Iraq, Yemen, Morocco and Italy, while others had been expelled from the Land of Israel in the Ottoman era. The Egyptians were not too keen on granting them all citizenship. You can still see the names of Ashkenazi Jews [of European descent] imprinted on the walls of the Eliyahu HaNavi synagogue in Alexandria.”

Although his brother was seen by his executioners as an Arab, Avraham Cohen identifies himself solely as Israeli. Levana Zamir, on the other hand, says that she is an Israeli, but not only an Israeli.

“That’s right. In Israel, I am living as if I were in exile. But don’t forget that the Egypt I was exiled from was a totally different country. The Egypt that I was born in no longer exists; it is gone forever. So how can we go back to a place that is no longer there? And how can the Jews return to a country where churches of the Coptic community are set on fire and where all those who are not followers of Muhammad are persecuted?”

Meanwhile, the storm seems to have abated. Essam al-Erian has retired from office as President Mohammed Morsi’s advisor. He may have left the Egyptian President Bureau of his own free will or, at least, that’s how he himself presents it. However, it is obvious to all and sundry that he has been deposed.

The affair has exposed the deep gap dividing the two neighboring countries. It also shows how the cynicism of politics prevails over sentiment and nostalgia. All the same, Levana Zamir believes that the affair has its positive aspects, as well.

”Now, at long last, the younger generation in Egypt realizes that there was a large Jewish community in Egypt once,” she says.