Jews in Egypt: The Story Of a Dying Community

The passing of Carmen Weinstein, leader of the Egyptian Jewish community, symbolizes the near-end of the community in the land of the Nile, writes Jacky Hugi. 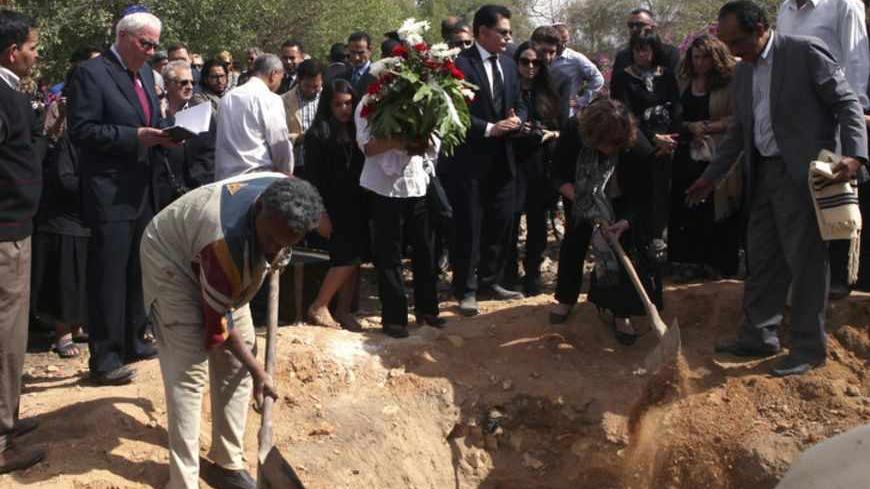 Diplomats from the United States and Israel seen with other mourners as they bury Jewish leader Carmen Weinstein at the Bassatine Cemetery, Cairo's only active Jewish burial site, in Cairo, April 18, 2013. - REUTERS/Asmaa Waguih

Twenty elderly women convened an urgent, extraordinary meeting. These were the members of the Jewish community in Cairo, and on the agenda was the election of a new president for the community and burial arrangements for her predecessor.

Former President Carmen Weinstein had passed away two whole days earlier on April 13; she had been a strong woman, childless, aged 82. It is no coincidence that there were no men at the meeting. The handful of Jewish community members includes only women, at least as far as is known. The assembled members  elected Magda Haroun, daughter of communist and intellectual Chehata Haroun. From that moment, Magda embarked on a not-very-long journey; the journey of witnessing the end of Jewish life in the land of the Nile.

Near the grave of Carmen Weinstein in the Bassatine cemetery in Cairo’s old neighborhood, minutes before Weinstein was laid to eternal rest, Haroun spoke. She turned to the Egyptian nation and begged them to live in harmony as in the past, without religious factionalism, under the flag of unity that had prevailed in times gone by.

“The members of the Jewish community are Egyptian citizens,” she added in an interview to the Al-Ahram newspaper, “Jewish synagogues are like the pyramids and the sphinxes. We will live forever in Egypt, because religion is for God and the nation is for everybody."

“Carmen was an educated, wise and knowledgeable person,” says Dr. Yossi Amitay, who had gotten to know Weinstein during his years in Cairo when he served as head of the Israeli Academic Center. “She was very fluent in English and French. In the past, she even wrote a number of plays in English, mainly for children. I didn’t get the impression that she had close friends, but she administered community matters with a strong hand, and with integrity. The following issues were of special concern to her: ensuring the welfare of the impoverished among the community members with the support of Jewish institutions such as the Joint [American Jewish Joint Distribution Committee or JDC]; safeguarding the assets of the community; and holding ceremonies and prayers on Jewish holidays. She uncovered embezzlements of the community coffers on the part of her predecessor, and did everything she could to restore proper management.”

Weinstein was brought to her final rest in the largest funeral service conducted for a Jew on Egyptian land in the last decade.

This Jewish community arouses a great deal of interest, especially in recent days. At its height, in the mid-20th century, the community numbered 80,000 souls. Ever since the establishment of the state of Israel, the Jews in Egypt have taken pains to disavow any suspicion of support for Zionism on their parts or any other subversive activity. For example, they avoided any contact with Israeli journalists, or friendly overtures on the part of the Israel embassy in Cairo. Now, as the community nears the end of its existence, Egypt’s future is also shrouded in darkness. There is no way of knowing what will be the fate of the considerable property owned by the community, especially its 34 synagogues (of which only three are active), real estate, cultural institutions and thousands of ancient sacred manuscripts.

Magda Haroun said that these assets and possessions are all part of the Egyptian nation’s heritage. “It is yours, and it is your property,” she proclaimed, and one could sense that she was directing her words to the day when no Jew would remain on Egyptian land. “We want you to remember, that Jews lived in Egypt and were harmoniously integrated in all spheres of [Egyptian] life.”

Dr. Amitay: “Wealthy Jewish elements in the United States and Europe exhibited interest in the community’s spiritual and material assets, and were willing to invest a lot of money to acquire old, ornate Torah scrolls and other cultural assets, and take them out of Egypt. Carmen Weinstein resolutely opposed this trend, because she was very conscious of the stance of the authorities: that the religious and cultural assets of the Jews are an inseparable part of the Egyptian cultural heritage. Thus, according to the authorities, these assets must remain in Egypt, under the domain of the community as long as it exists. She was well aware of the necessity of maintaining proper relations with the country’s internal security system that protected Jewish religious institutions every day of the year, but mainly on holidays and festivals.”

In the few days that have passed since Haroun’s appointment to her new role, her voice has been clearly heard on the Egyptian media. Haroun appeared in a series of television interviews, and parts of the speech she delivered over the fresh grave of her predecessor were quoted. It is already clear that she will act to perpetuate the existence of Egypt’s Jews in the collective Egyptian memory. A question mark hovers above the fate of the valuable property, most of which was nationalized by the regime. In the coming years, we assume, Haroun will also take action to ensure the personal security of the community’s women.

The fact that Haroun is not deterred from expressing her viewpoints in public, or from making public statements with political overtones, is not to be taken for granted. Her predecessors in the role had kept very low profiles, so as not to offend anyone. But Magda Haroun, 61, imbibed politics with her mother’s milk. Her father, lawyer Chehata Haroun (from the Silvera family) was one of the prominent figures in the Egyptian communist movement and one of the founders of the leftist Al Tagammu Party (“the alliance”). He and his wife Marcelle gave their daughters qualitative higher educations, and both girls became members of liberal professions. Nadia, educated as a lawyer, married Ahmad Kassem, a director of documentary films. Magda, a graduate of engineering studies, runs a law firm in partnership with her sister Nadia. Both had shared the [political] views of the Al Tagammu Party, but were not actively involved in politics.

Yossi Amitay had personally known attorney Chehata Haroun, and had even written about him in his book, Egypt and Israel: View from the Left [in Hebrew]. Amitay relates that Chehata Haroun was an anti-Zionist who believed in the [Communist] International and class warfare. In his will, Chehata demanded that no Israeli diplomat escort him on his final journey, and refused to allow a rabbi from Israel to conduct the funeral service. He died in 2001.

“Chehata believed that the solution to the Jewish problem would come with the national and class liberation of the countries in which Jews live. He negated the establishment of a special state for the Jews, a state that removes them from the struggle in their own countries. He viewed Egypt as his one and only homeland, even when he personally suffered discrimination as a Jew. He even addressed this issue in his book, Yahudi fi al-Kahira [A Jew in Cairo]. Chehata used to say, “I am [identify] with all the oppressed people in the universe. When the Jew is oppressed — I am a Jew; when the Palestinian is oppressed — I am a Palestinian; when black Africans are oppressed — I am a black African.”

After being elected president of the Jewish community, Chehata’s daughter Magda Haroun was interviewed by the Egyptian CBC television station. Magda stated, during the interview, that she had never visited Israel, and that she would only visit there after the Palestinians received all their rights, and only for religious reasons. Thus it seems that the interests of the Jewish community in Egypt have been entrusted into the capable hands of Magda Haroun, a seasoned politician — no less than her predecessor.

Jacky Hugi is the Arab affairs analyst of the Israeli army radio Galie-Zahal, a columnist for the Israeli business newspaper Globes and the former Arab Affairs correspondent for Israel`s Maariv daily. He is the author of Arabian Nights.Com (published February 2011), a nonfiction introduction for Israeli readers to contemporary social, cultural and political discourse within the Arab World and the winner of both the 2007 Media award of The London Next Century Foundation and the 2008 B'nai B'rith award for journalism of Jewish communities in the Arab World, among others. He is based in Tel Aviv and holds a masters degree in Middle Eastern and African History from Tel Aviv University.