The leader of Egypt's tiny Jewish community has plans to make sure the country's long Jewish heritage outlives her by expanding synagogues into cultural centers and libraries. 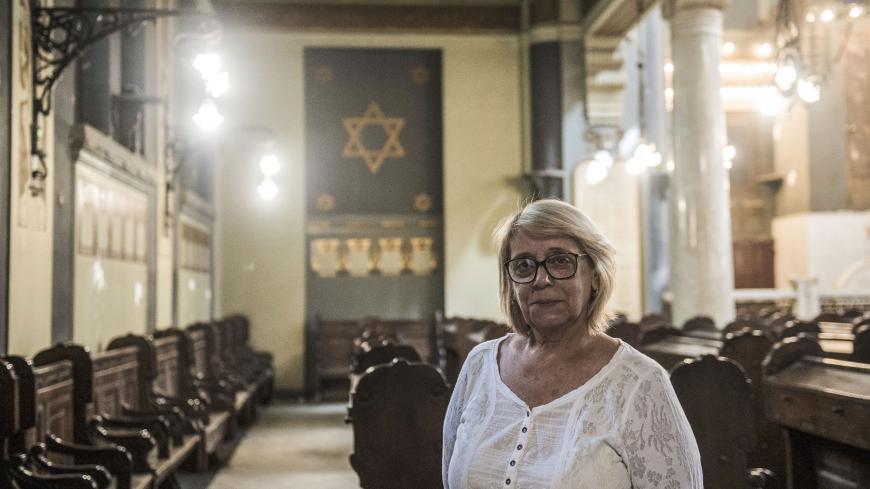 Magda Haroun is well aware that responsibility for Egypt’s remaining Jewish heritage and history rests squarely on her shoulders. “I am the last one to close the door and turn off the lights of the synagogue,” she often tells the local press in interviews.

But turning off the lights is far from what Haroun, the head of the Jewish community and the president of the oldest Jewish charity association in Egypt, really wants to do. The energetic 66-years-old, who is the youngest member of Egypt’s miniscule Jewish society, has come up with a number of new projects for her association “Drop of Milk” to maintain Jewish heritage in Egypt.

The new plans include turning Egypt's synagogues into cultural centers where Jewish books, documents and memorabilia can be seen and accessed and films are screened.

“Today, [the association] is focused on preserving the Jewish heritage and has been working on cleaning up the synagogues and open them to visitors,” Haroun told El-Watan News in March. There are 11 synagogues left in Cairo, of which many are in poor shape.

The Drop of Milk Association is based in one of these synagogues, called Shaar Hashamayim, which means "gate of heaven." Founded in 1920, two years after World War I, the association works to provide assistance to orphans and the poor members of the Jewish community.

“The story behind the name is that the charity group used to offer Jewish children a cup of milk every morning,” Vimoni Okasha, a non-Jewish member of Drop of Milk and a tour guide, told Al-Monitor.

In the 1960s, most of the country's Jews were displaced from Egypt and the association began helping the elderly in the community. “Presently no more than five Jews remain in Egypt,” said Okasha. “But now that the association is working on preserving Jewish heritage, we have new members from all walks of life and from different religions. Each member contributes to the protection of this heritage in the way that they can.”

She explained that the filmmaker members are working on documenting Egypt's Jewish history, while others have volunteered to do simple repairs in the temples and help clean them up. Larger repairs require the authorization and cooperation of the Ministry of Antiquities.

Okasha herself helps in her own field of work, which is tourism. “I have been organizing tours of the synagogues and other Jewish monuments on the Drop of Milk Facebook page. About 3,000 young people have expressed interest in taking a tour, but we can only accommodate 20 [at a time].”

In her interview with 7-Ayam Magazine in early 2017, Magda Haroun said she had been surprised to discover how many young people are interested in Jewish heritage in Egypt and are concerned about what would become of it once the Jewish population, now just a handful of elderly people, no longer exists. “These young people of all religious denominations have volunteered to clean the Jewish temples,” she said.

According to Sami Ibrahim, one of Drop of Milk's leaders, the charity is also working on a project to increase access to books in Hebrew.

“Nearly 2,000 students studying Hebrew graduate every year. There are only three Jewish libraries in Cairo, which include about 30,000 books in Hebrew. We aim to set up libraries in the temples,” Ibrahim told El-Watan News, adding that the charity also wants to establish a digital library system. He went on, “Plans are also in place to establish the first Jewish museum on Adli Street in downtown Cairo, in a bid to integrate Jewish heritage into Egyptian history, as there are also Islamic and Coptic museums in Egypt.”

Gamal Mustapha, head of the Islamic, Coptic and Jewish Antiquities Department at the Ministry of Antiquities, told Al-Monitor that the association’s plans to maintain Egypt's Jewish heritage has the ministry's support. “The ministry is keen on working to preserve Jewish heritage as it is part of Egyptian heritage. Egypt has 12 Jewish archaeological sites and 11 synagogues in addition to cemeteries. We are working on restoring all Jewish monuments in Egypt,” he said.

“The ministry is following the work of Drop of Milk and praises its role in trying to preserve Jewish heritage. We welcome any coordination with the association to this effect,” he said.

The question is whether the ministry will also provide funding. “The major challenge for the association is the lack of funding,” Okasha said, underlining that Drop of Milk needs not only the support of the state but also the support of local and international organizations interested in ensuring that Egypt's Jewish heritage does not die with the members of its small, aging community.