Some Iraqi Jews are organizing to officially petition the Baghdad government for the right to reclaim their Iraqi citizenship. 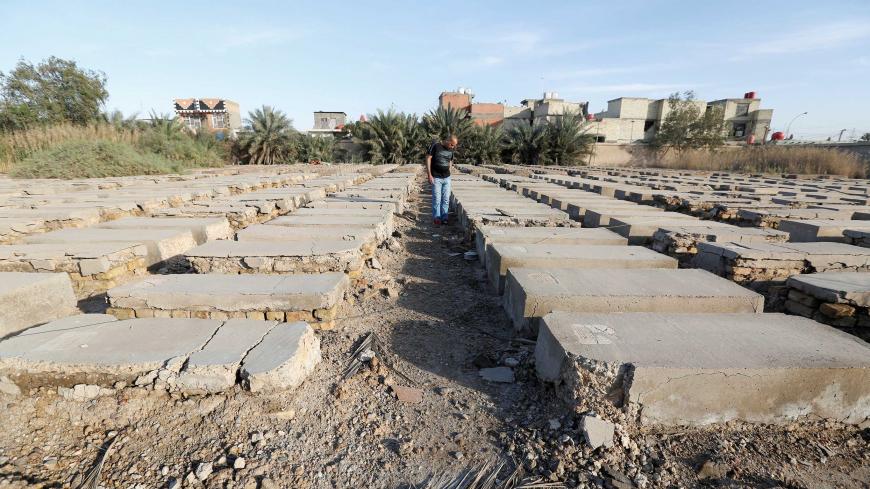 A man walks inside a Jewish cemetery in the Sadr City district of Baghdad, April 1, 2018. - REUTERS/Wissm Al-Okili

ERBIL — A number of Iraqi Jews are organizing to officially demand the restoration of their Iraqi citizenship and the annulment of Article 17/II of Iraqi Nationality Law no. 26 (2006), which expressly excludes Jews from pursuing the option. The law provides that Iraqi nationality be restored to those who lost it as a result of political, racial or sectarian decisions.

Edwin Shukar, vice president of the European Jewish Congress, called for the restoration of Iraqi citizenship for Jews in a speech delivered Aug. 15 at the First International Conference on the Yezidi Genocide in Erbil, the capital of Iraqi Kurdistan. The first Mizrahi Jew to assume the vice presidency of the Board of British Jews, Shukar wants to acquire Iraqi citizenship in part because he feels he needs it to better represent the community of Iraqi Jews, in the diaspora and in Iraq, where it lacks formal representation before the government.

Shukar, born in Baghdad in 1955, fled the Baath regime with his family in 1971. His mother tongue is Arabic, but he is equally fluent in Hebrew and English. Shukar told Al-Monitor that his ties to Iraq remain deeply rooted.

Shukar is not alone in wanting to reclaim Iraqi citizenship. For the London-based activist Niran al-Bassun, daughter of the prominent Iraqi journalist Salim al-Bassun, the Nationality Law is an obstacle prejudicing the rights of Jews.

“I left Iraq in 1973, but I always wanted to return to Baghdad and regain my Iraqi nationality,” she said. “It is my right, and no authority has the right to deprive me of it. Nationality is not a bestowed gift. Its a right for every citizen.”

In an interview with Al-Hurra TV, Shukar said, “My father gave me a gift, which is my Iraqi identity, and he got it from his father, and I too want to give it to my children and grandchildren.” He added, “Our identity goes back 2,600 years in this land without interruption.”

Shukar told Al-Monitor that he is working with other activists to submit a petition to the Iraq's supreme court to restore Iraqi citizenship to Jews and ensure against systematic discrimination against them for religious or political reasons.

Commenting on the popularity of these demands at the grassroots level, Shukar said that after hearing his public statements on the issue, a number of activists and legal experts inside Iraq and from elsewhere have contacted him, offering to help with his petition.

He has also gotten the attention of some Iraqi political forces. Raed Fahmi, a leader of the Communist Party, which is affiliated with Sairoon Alliance, which won the largest number of seats in May elections, has expressed his support for the restoration of citizenship for all Iraqis unjustly stripped of their nationality, including Jews who wish to return to Iraq.

“The Iraqi state has obligations to them,” Fahmi stressed. “Out of principle and high values, we [should] give rights to any Iraqi citizen, including Jews.” Previously, Muqtada Sadr, head of the Sairoon Alliance, had also supported Iraqi Jews' right to regain their citizenship, but on the condition that they had not acquired Israeli citizenship.

Shukar, in his speech at the Yazidi genocide conference, shed light on the forced displacement of the Jewish minority during 1950-51 in Baghdad, Basra and Kurdistan.

“Before this displacement, 40% of Baghdad's population were Jews,” he said. “But in 1950 and 1951, these Jews were stripped of their nationality and forcibly deported to Israel.”

Emile Cohen is another Jewish activist who lost his nationality. He had learned of his being stripped of his Iraqi citizenship while he was in London completing his postgraduate studies.

“I stayed in London after losing my Iraqi nationality in the 1960s,” Cohen told Al-Monitor. “I did not leave for Israel or ask for Israeli nationality. It is a great injustice not to allow someone as attached to his homeland as I am to get his nationality back.”

On a related note, Shukar visited Mosul on Aug. 14 and toured some of the Jewish endowments and the only synagogue remaining from five that had survived into the mid-1970s.

Faisal Jeber, director of the Gilgamesh Center for Antiquities and Heritage Protection, told Al-Monitor in Mosul that the synagogue had included a school that taught Hebrew and Jewish law.

“The synagogue is still owned by the Jewish community, but is in a deplorable state.” Jeber said. “It was seized by a Muslim neighbor in the mid-1970s after the last of the Jews left Mosul. In the mid-1980s, a decision by the Revolutionary Command Council ordered the expropriation of properties of Iraqi Jews abroad. The synagogue was sold to the Muslim family who now occupies it.”

Shukar talked about efforts to reinstate Jewish ownership of the endowments. “Getting back our citizenship is more important than redeeming our expropriated properties,” he said. “What’s the point of getting Jewish properties back if there are no Jews to visit them.”

On the symbolism of religious sanctuaries in Mosul for the Abrahamic religions, Shukar said, “I visited the shrine of Prophet Yunus, also called Jonah's Tomb. It is a wonderful place that embodies the three Abrahamic religions. There, I imagined a post-[Islamic State] Iraq with all its religious components.”

The archaeologist Hikmat al-Aswat, former director of the Mosul Museum, explained the multicultural heritage of the shrine. “Jonah's Tomb was an Assyrian temple, and then it became a monastery. With the spread of Islam, the monastery was turned into a mosque.”

The goal that Shukar and other activists have set for themselves does not look like an easy one to accomplish, given that they must exert sufficient legal, political and media pressure on the Iraqi government for it to respond to their request. They seem, nonetheless, determined.