Shiite leader Muqtada al-Sadr has spoken out in favor of allowing Iraqi Jews to return home after decades in exile. 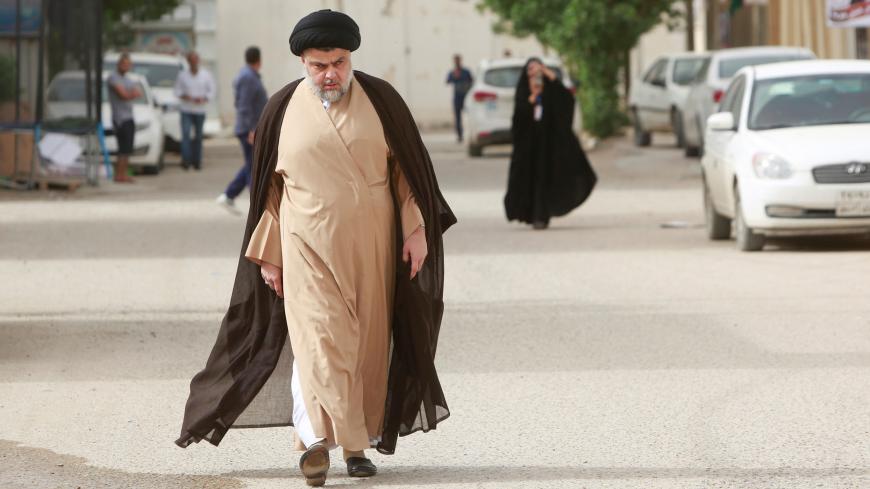 Iraqi Shiite cleric Muqtada al-Sadr walks to cast his vote at a polling station during the parliamentary election, Najaf, Iraq, May 12, 2018. - REUTERS/Alaa al-Marjani

In a bold move, Iraq’s Shiite cleric Muqtada al-Sadr spoke in favor of the return of the Jews who were evicted from the country half a century ago. Sadr responded to a question posed by one of his followers June 2 on whether Iraqi Jews have a right to return after having been forcibly displaced due to previous Iraqi policies, noting that they used to own properties and were part of the Iraqi community. He said, "If their loyalty was to Iraq, they are welcome." His answer was taken as tantamount to a religious edict, or fatwa.

The response has won him even more popularity and admiration for his policies and unexpected moves. His bloc, the Sairoon Alliance, won the largest number of parliament seats after allying with the Communist Party in an unprecedented move. This opening to ethnic and religious diversity reflects a shift in the personality of a Shiite religious and political figure known for being rebellious and defiant over the past 15 years.

However, an overview of Sadr’s previous positions reveals that this positive attitude toward Iraq’s Jews is not really new. In an interview with journalist Sarmad al-Tai in 2013, Sadr said he "welcomes any Jew who prefers Iraq to Israel and there is no difference between Jews, Muslims or Christians when it comes to the sense of nationalism. Those who do not carry out their national duties are not Iraqis even if they were Shiite Muslims.”

Diyaa al-Asadi, a leader in the Sadrist movement, told Al-Monitor that while his movement criticizes the founding of the State of Israel for usurping the historical lands of Palestine, it distinguishes between Zionism as a secular political movement and Iraqi Jews as a religious minority rooted in Iraq.

Sadr, whose policy of openness to religious diversity is part of his comprehensive program to ease the sectarian and religious polarization of Iraqi politics, calls for the protection of Iraqi Jews and for granting them all their citizenship rights.

Tai, the reporter who interviewed Sadr in 2013, told Al-Monitor that by touching on the return of Iraqi Jews, Sadr has broken the silence on a sensitive issue that no other political or religious Iraqi leader has dared raise since the exodus of Jews in 1950-1951.

Sadr’s positivity toward a sect that has been neglected for more than half a century represents a real revolution that could change the perspective of large segments of Iraqi society.

Professor Ronen Zaidel, a specialist on Iraqi affairs at the University of Haifa, takes particular interest in Sadr’s policies. He believes that the fact that Sadr linked the return of Jews to their loyalty to Iraq as a conditional openness extended only to those holding non-Israeli passports. However, he expressed cautious optimism that this could be just a first step to start a dialogue with the representatives of Iraq’s expatriate Jews. He does not expect that Sadr's position will upend the Iraqi policy on all issues related to the future of the Jewish community in Iraq.

“The Iraqi authorities may permit members of the Jewish community to visit Jewish holy sites and shrines without granting them further rights or restoring their Iraqi citizenship,” he said.

Iraq is home to several Jewish holy shrines, including that of the Prophet Ezekiel (Al-Kifil in Babylon), Ezra HaSofer (Al-Azir in Maysan), the Prophet Daniel (near the castle of Kirkuk), the Prophet Jonah (in Mosul, destroyed by the Islamic State) and the Prophet Nahum (in the village of Alqosh).

Shukr hopes that “the openness of Sadr will be the start of public interest in preserving the holy Jewish places, which are common symbols of the Abrahamic religious heritage within Iraq and would pave the way for the rebuilding of ties between the new generations that are freed from the chains of hatred and fears of conflict.”

Iraq's 2005 constitution did not recognize Judaism as one of the officially recognized religions such as Islam, Christianity, Mandean and Yazidi (Article 2.2).

A 1982 law that defined the officially recognized religious communities in Iraq included the Jewish community among the official religions but under the name “Mossawi,” or "follower of Moses." The term “Israeli community” had been used in previous legislation and was changed to avoid mention of Israel for fear it could be interpreted as official recognition of the state.

The new Iraqi Nationality Law of 2006 also reinstated Iraqi citizenship for those who had lost it as a result of political, sectarian or racial decisions. A few minorities among Saddam Hussein’s opponents, including the Feyli (Lurs), benefited from the law, but Jews were excluded.