After KRG formally welcomes Jews back to Iraq, will their numbers increase?

The opening of a Jewish representation office in Iraqi Kurdistan gives exiled Iraqi Jews a glimmer of hope of returning to their homeland after fleeing persecution and dispossession. 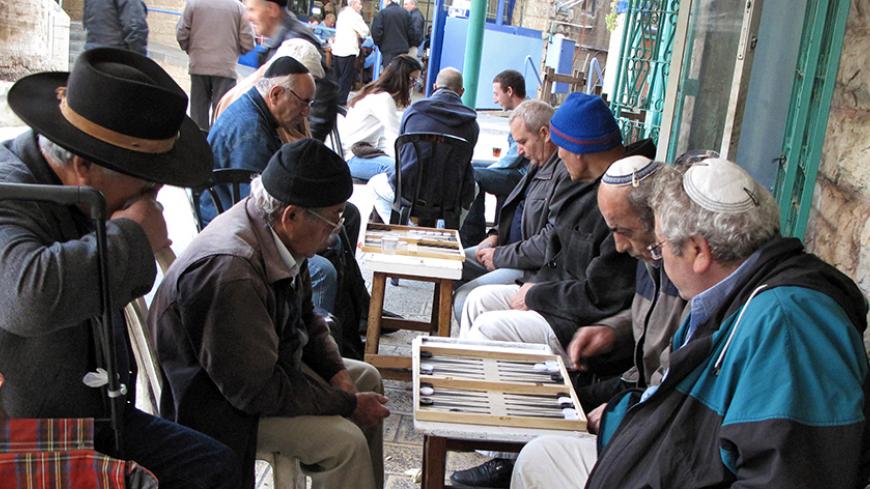 BAGHDAD, Iraq — Many Iraqi Jews forced from their country or displaced following persecution and dispossession more than six decades ago still dream of returning to their homeland. They retain a nostalgia for their temples and the streets where they grew up. It may be difficult or ultimately impossible for a large number of them to turn this dream into reality, but some have begun to return thanks to a law recently passed in Iraqi Kurdistan. Last month, the Kurdistan Regional Government (KRG) announced the opening of a Jewish representation office at the Ministry of Endowments and Religious Affairs, increasing the number of officially recognized religions to seven. The others are Islam, Christianity, Yazidism, Yarsanism, Alawism and Kaka’ism.

The history of the Jews in Mesopotamia dates back to the sixth century B.C. The Jewish community played an important role in Iraq’s economic and cultural life, but in the 1940s Jews became the victims of organized attacks under the Baathist regime. Many were murdered, and their homes and businesses looted and confiscated. Those who survived fled to Europe, the United States and Israel. The persecution of Jews in Iraq coincided with the rise of the Zionist movement, the expulsion of Arabs from Palestine and the establishment in 1948 of the State of Israel, with which the Jews of Iraq had nothing to do. Most Iraqi Jews lived in Baghdad, where they freely practiced their religion. After the founding of the Iraqi state in 1921, Sassoon Eskell, a Jew, became its first minister of finance. He remained in office for two years and was known for his commitment and professionalism while presiding over the ministry.

Mariwan Naqshbandi, spokesperson for the KRG Ministry of Endowments and Religious Affairs, told Al-Monitor, “The KRG parliament in April 2015 issued the Law of Minorities, which was unanimously approved before being signed by KRG President Massoud Barzani. This law confers to every religious community in the Kurdistan Region of Iraq the right to establish a representation office and practice its rituals freely.” According to Naqshbandi, more than 300 Jewish families live in the Kurdistan region.

“The number of Jews in the Kurdistan region is increasing every day, and this led the KRG to open a representation office for them like with other religions and sects. Jews are now entitled to submit their projects to the KRG and to build temples through their representation office,” he said. “There are large numbers of Jewish families intending to return to live in the Kurdistan Region of Iraq. They believe it is a safe place for them, especially after they confirmed their intention not to participate in the political process.”

Saad al-Hadithi, a spokesperson for Iraqi Prime Minister Haider al-Abadi, told Al-Monitor, “The opening of the representation office for Jews in the KRG is a good step, provided this office remains free from the influence of the State of Israel, since Iraq rejects any relations with that country.”

Araz Shukr, a pseudonym, is an Iraqi Jew living in the Kurdistan region. “Our presence in Iraq is not new. We have been living in this country for thousands of years. We were forced out of Iraq more than half a century ago, and we moved to other countries. We have the right to return to our country,” he told Al-Monitor. “There are Jewish families living in Israel who want to return to Iraq and live in the Kurdistan Region, as they feel that living in Iraq is part of their history and reaffirms their presence in this world. Despite everything available to them in Israel, Iraq is still their homeland.”

Israa Khaled, who conducts research on the Iraqi Jewish community, told Al-Monitor, “The decision of the KRG [to open a Jewish office] should have been implemented immediately after the fall of Saddam Hussein’s regime in 2003. Although the decision to open a representation office came late, it remains crucial. This decision benefits the Kurdistan Region, which includes the oldest communities in Iraq and the world. Numerous Kurdish Jewish families still reside in Kurdistan at the moment, but hide their religious affiliation for fear of societal oppression.”

Khaled called on the Baghdad government to also take action. She said, “[It should] open a private representation office for the Jews of Baghdad and other provinces since they are Iraqi nationals who unjustly left the country after being subjected to the ugliest acts of violence [and forced] to leave their homeland and migrate. These Iraqis still feel nostalgic for the land where [Jews have] lived for thousands of years.”

She added, “The KRG must fulfill numerous tasks, including protecting Jews, recognizing their religious affiliation, providing them with the opportunity to participate in the political process, restoring their temples and shrines and ensuring their protection when they visit places of worship and practice their religious rituals, like other religions in the Kurdistan region.”

The return of Jews to the Kurdistan Region of Iraq is a positive step and could continue. Such, however, is not the case in the near term for other Iraqi areas, where residents do not differentiate between Israelis, Jews and Zionists. The Baathist regime under Hussein had pushed the idea that the Jews were enemies of Iraq, conflating hostility toward Israel with hostility to Jews in general. This could take some time to change.