Who are Iraq's Kakai?

In an interview with Al-Monitor, Ako Shawais, the first political representative of Iraq’s Kakai minority, discusses why this sect is so secretive and its careful struggle for political and religious rights. 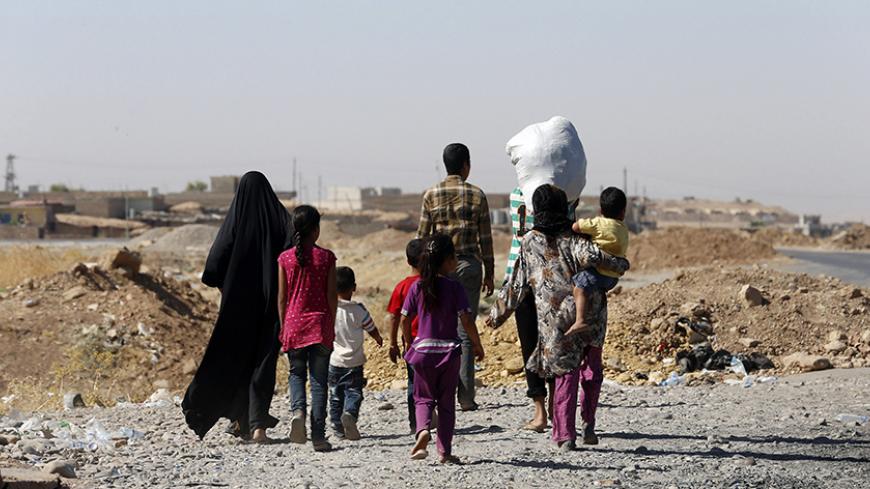 A displaced family from an Iraqi minority sect walks toward the entrance of Mosul, fleeing from Islamic State persecution, in northern Iraq, Aug. 21, 2014. - REUTERS/Youssef Boudlal

HALABJA, Iraq — The Kakais are one of the religious minorities scattered throughout northern Iraq in the provinces of Sulaimaniyah and Halabja, in the Ninevah Plains of Ninevah province and in villages to the southeast of Kirkuk. Historians and researchers disagree on their classification, as mystery and secrecy shroud this sect. Kakais have kept their beliefs hidden, and this secrecy has prevented them from forming their own independent political parties and gaining representation in the parliaments of the central Iraqi government and Kurdistan Region.

Kakais ethnically associate themselves with Kurds, but a group of them proclaims that the Kakais are a distinct community and demands political representation. The population has won a quota-mandated seat in the Halabja provincial council, occupied today by Ako Shawais.

Shawais is a supervisor working at the Education Directorate in the province of Halabja in Iraqi Kurdistan and a human rights activist advocating the cause of the Kakais. He was chosen to be the Kakai representative in Halabja, the first such position in contemporary Iraqi and Kurdistan Regional Government (KRG) history.

In his interview with Al-Monitor, Shawais explained the circumstances under which he was chosen as the first representative of the Kakais in Halabja and discussed the limits of official recognition of Kakais and the dispute among the sect itself. One group believes that Kakaism is an independent religious identity, while another believes that it is part of Islam. Shawais laid out the differences between Kakais and Muslims in terms of rituals and beliefs with rare candor.

Al-Monitor:  What is the status of the Kakais’ official and legal recognition as a religious minority in the federal government and in the KRG?

Shawais:  The official recognition of Kakais is still very limited. The 2005 Iraqi Constitution and the KRG Constitution make no reference to Kakais as a religious community. So far, the Kakai sect is not represented within the Ministry of Endowments and Religious Affairs in the Kurdistan Region, despite ongoing negotiations on the name of the representative. This is mainly due to the internal conflict within the Kakai community. One team is proclaiming Kakaism as a religious minority independent from Islam, and the other holds that Kakais are indeed Muslims.

In terms of formal representation in state institutions, Kakais have no representative in Iraq’s federal or the Kurdistan Region’s parliaments, governments or provincial councils, as there is no quota for Kakais. However, Law No. 5 of 2015 protecting the rights of groups in Kurdistan mentioned Kakais, for the first time in modern history, as one of the religious and sectarian groups in Iraq's Kurdistan Region.

Al-Monitor:  There are two groups within the Kakai minority: The first believes that they represent an independent religious identity, and the second claims to be a subgroup of Islam. What is the main cause of this division, and how does it affect the recognition of Kakaism as an independent minority?

Shawais:  I believe this division was caused by the Kakais’ fear of being attacked by the Islamic State militants or by Islamic puritanical militants. It is true that each team has its own arguments and grounds, but it is clear that those who claim Kakais are Muslims inhabit areas surrounded by Muslim militants — in Kirkuk, Mosul or even in Kalar in Sulaimaniyah.

When arguing with Kakais who claim to be Muslims, you will find that the most important argument they invoke to justify their claim is that they are living in dangerous areas, afraid of being labeled as infidels, especially since IS accuses Muslims who disagree with [its ideology] of being infidels, let alone non-Muslims.

This is true. IS and hard-line Islamist groups have killed around 200 Kakais. This internal divide has surely affected the political representation of Kakais and delayed their demand for a quota-mandated seat. The controversy between the advocates and the opponents of categorizing Kakaism as [a separate religion] was the reason for the delay in choosing a Kakai representative at the Ministry of Endowments and Religious Affairs in the Kurdistan Region.

Al-Monitor:  Do you think Kakais are not Muslims? How do they differ from Muslims?

Shawais:  Kakaism is a monotheistic religion, but it is not related to Islam. You can notice some small differences in Halabja. Our funeral rituals are different from those of Muslims. Kakais do not ask a Muslim mullah to recite the Quran beside the deceased and do not set up tents to receive condolences and recite al-Fatiha [the opening verse of the Quran] in funeral prayers. However, Kakais do all of those things in the areas where they are trying to fit in with their Muslim neighbors.

Kakais have their own house of worship, similar to a church or mosque. It is called a jamkhaneh. Although they're supposed to be holy places, Kakai places of worship may be an ordinary house, so as not to attract attention. We prefer to keep our houses of worship hidden. This is a part of our religion’s philosophy based on secrecy. But the most important difference from other religious doctrines, especially Islam, is that we believe in the transmigration of the soul. We believe a good spirit keeps reincarnating across time, and this is why we believe some Islamic and other religious holy figures are an embodiment of the same good spirit.

Al-Monitor:  Why did the Kakais obtain a quota in the provincial council of Halabja in particular, among all other Iraqi Kurdistan provinces, though they are present in other provinces such as Kirkuk, Sulaimaniyah and Nineveh?

Shawais:  The main reason is that the majority of Kakais in Halabja claim they are independent from Islam. They are a group of educated elites and holders of university degrees who have a vision about the importance of the independent representation of their religious community. Their social environment is less radical, and they do not have as neighbors a Muslim majority that they fear. This is why they coexist in harmony with their neighbors and do not have the dual religious identity problem.

Another very important reason is that the place of origin of the Kakaism religion is located near the city of Halabja. Prominent Kakai holy places are located in or around this city, such as the tomb of Sultan Isaac al-Barzanji, located behind the Iranian border, but adjacent to areas inhabited by Kakais inside the Iraqi border. Halabja constitutes one geographic and religious area, but the modern political boundaries divided this area between Iraq and Iran. Kakais in these areas, including Hawraman village on the Iranian border, preserved their religious rituals in the relative freedom that they enjoy.

Al-Monitor:  Are Kakais subject to religious discrimination by other religious groups or by some Muslim clerics who believe Kakais are a non-Muslim religious minority?

Shawais:  Discrimination against Kakais is based on religious reasons, especially in the areas where they live with Muslims. Many Muslims have stereotyped ideas about Kakais, and therefore do not accept them — even if Kakais claim to be Muslims and like other Muslims fulfill all of their religious duties and practice all Islamic rituals. Kakais are mainly accused of neglecting Sharia rules and disregarding religious duties of prayer, fasting, pilgrimage and almsgiving.

There are other examples of social and economic discrimination, such as the undeclared boycotting of Kakai shops and stores, which often affects the Kakais’ livelihood. Even in Halabja, some Muslim clerics have harsh positions toward Kakais, most notably the statement issued and signed by a group of Muslim clerics in Halabja objecting to the appointment of Kakai lawyer Goran Adham to the position of governor of Halabja in early 2010. Sheikh Muhammad al-Mufti had declared in one of his Friday sermons in Halabja at the time that a custodian of Muslims cannot be a non-Muslim, in reference to Adham.

Al-Monitor:  How were you chosen to represent the Kakai quota and become the first member of the provincial council of Kakai origin?

Shawais:  On Feb. 5, 2015, the KRG parliament unanimously approved a project to turn Halabja into a province in a special session in the presence of a number of Kurdistan ministers and government and party officials. Halabja thus became a new province in the Kurdistan Region, and various Kakai representatives from Erbil, Kirkuk and Sulaimaniyah submitted a request to members of parliament to grant Kakais a seat in the provincial council comprising 25 seats. Our request was approved for the first time in Iraq's history, and this was good news for Kakais in Iraq and Iran.

We then participated in the provincial elections, since our community in Halabja includes more than 430 families. Eleven candidates joined the democratic elections held on Feb. 20, 2015, and I ended up winning.

Al-Monitor:  What are the Kakais’ religious and political demands?

Shawais:  We want our religion to be recognized. Article 6 of the constitution of the Kurdistan Region refers to numerous religions in the region but does not mention Kakaism. This is why we held a series of meetings, and on April 2, 2015, we visited the KRG parliament and held meetings with its members and speaker. We demanded the inclusion of our religion in Articles 6, 19 and 30 of the KRG Constitution. We also requested to be represented in the Ministry of Endowments and Religious Affairs and for Kakais to be included under Law No. 5 of 2015 protecting the rights of minorities in Iraqi Kurdistan. Indeed, Kakais were mentioned in this law as one of the recognized religious components, but so far they have yet to get a quota whether in the federal Iraqi parliament or in the KRG parliament, which is what we are trying to obtain.

On the religious level, we do not have strong financial resources to promote the role of our places of worship. We need more financial allocations by the official authorities in the federal government and the KRG. However, these places must first be recognized as places of worship. The official recognition of Kakaism would allow us to cater to the needs of our religious regions, especially in light of the lack of financial allocations to restore these places, and give them the same attention accorded to the places of worship and monuments of other religions. Our political demands must be met before our religious demands.

Al-Monitor:  You were chosen to assume the first official political office assigned to Kakais. Do you think the political participation of Kakais is the best means for raising your demands?

Shawais:  On June 1, 2015, the Halabja governor and his two deputies took office. On Sept. 23, 2015, a political agreement was reached on the formation of the Halabja provincial council among the political currents, but so far no order has been issued on the appointment of the provincial council members by the KRG Ministry of Interior and Council of Ministers. I have yet to officially take office, but I am coordinating with the authorities of the province on the demands of the Kakais in the province. This means that we have a long and difficult way ahead to improve our participation in the political process.