Some in Iraq’s Kakai minority group have claimed to be Muslim to avoid persecution, while others are working to form a militia to protect themselves. 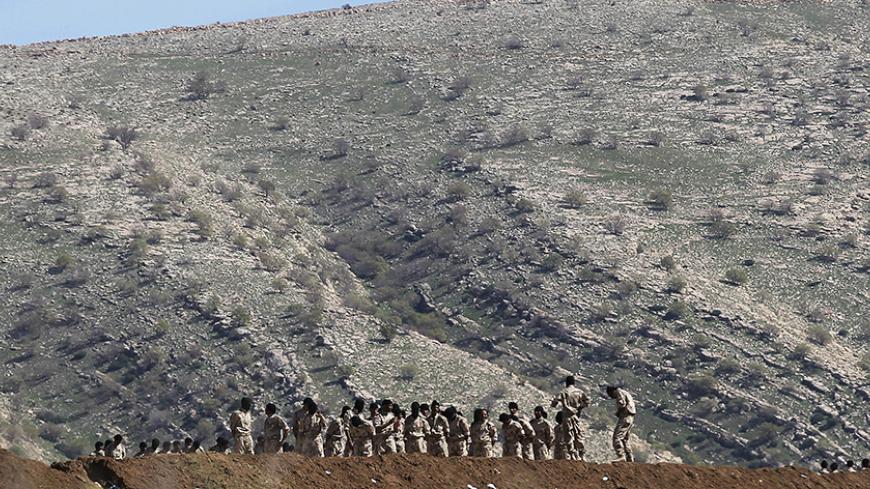 Volunteers to fight the Islamic State, from different Iraqi factions including Kurds and Yazidis, train at a camping area near Kurdish security points on Bashiqa mountain, northeast of the Islamic State-held city of Mosul, March 7, 2015.

KIRKUK, Iraq — The desperation of a little-known minority fleeing the Islamic State and religious persecution has led some to deny their faith and others to take up arms.

Like the Christian and Yazidi minorities before them, the Kakais are forming an armed force to protect themselves. Also called “Yarsan” or “Ahel al-Haqq,” the Kakais were displaced from the Ninevah Plain area when IS invaded Mosul, the second-largest city in Iraq, in the summer of 2014. The Kakai creed dates back to the 14th century in western Iran and contains elements of Zoroastrianism and Shiism. They have been persecuted for their unusual beliefs, driving them to keep a low profile and giving them a reputation for being secretive.

Against the backdrop of the IS attack and out of fear of similar attacks in Kurdish areas, the Kakai announced in September 2014 that they are Muslims. Thirty Kakai figures met at a press conference at the Union of Religious Scholars building in Kirkuk and announced that they had never broken ties with Islam and that their identity cards read “Muslim.”

Other Kakais in Kirkuk reject the announcement, telling Al-Monitor a panoply of stories about members who embrace Islam to protect themselves from persecution. They said the result is divisiveness that threatens the Kakai group as a whole and splits its leaders.

Recep Assi, director of the Yarstan Institution in Kirkuk — an organization that aims to raise awareness about Kakaism and find a middle ground between it and the other groups in Iraq — said in an interview with Al-Monitor that the Kakai religion “is indeed monotheistic, but it has nothing to do with Islam."

He said, "It is a religion that believes in reincarnation, a doctrine that has nothing to do with Islam. Declaring Kakais Muslims would not protect them from persecution, as Muslim religious preachers still deemed Kakais heretics even after they announced they were Muslims.”

Adam Bidar, a theology professor at the University of Salahuddin, explained to Al-Monitor the nature of the division over the Kakai religion in Kurdistan. “On the one hand, there is a split between a religious discourse that incites hatred and deems Kakais disbelievers and polytheistic, and on the other hand a tolerant discourse that considers Kakais Muslims. This difference in views reflects the split in the Kakai street over their faith.”

Ahmed Qassem, a researcher of religious anthropology and head of research at the Iraqi Ministry of Migration and Displacement, said in an interview with Al-Monitor that the environment Kakais live in does not tolerate other religions. That mentality is the source of the Kakais’ hesitation to declare themselves followers of a particular religion, he said. “However, there are precedents whereby Kakais declared themselves non-Muslims. For example, Kurdish researcher Fred Ossrd stated in his book titled ‘Barzani Dogmas Principles’ that in 2001, the well-known Kakai figure Sayed Taleb Shukr Darwish declared that the Kakai religion has nothing to do with Islam, putting an end to long centuries of secrecy over the Kakai religion. However, this attempt was an exception in the history of an introverted religion,” Qassem said.

One of its little-known aspects is that the Kakai religion follows a nonmissionary doctrine that does not tolerate conversion. According to this religion, if one is not born a Kakai, one will never be a Kakai. The secretive group faces a lot of speculation and accusations regarding the nature of its beliefs, Nabil Aziz Mahmoud al-Mathfari, head of the history department in the Faculty of Education at the University of Kirkuk, told Al-Monitor.

Kakai men can be identified easily by their long mustaches, which they consider a sign of blessing. It's an obvious distinction from Muslims, who are required to trim their mustaches.

Declaring themselves Muslim is just one example of the Kakais' extreme efforts to protect themselves. Their move to form their own armed force puts an end to centuries of teachings that call for peace and avoiding violence. One militia volunteer told Al-Monitor the Kakais are taking up weapons like other minorities in Iraq, such as Christians and Yazidis, who have their own armed forces. He added that members of the Kakai forces, which number fewer than 680, are now training and plan to form three regiments.

However, Kakais, whose lives are largely removed from the world of politics, failed to anticipate that their bold step would put them in the center of political conflicts between the Kurdish parties, further complicating their lives.

Other Kakai militia volunteers spoke to Al-Monitor on condition of anonymity about the obstacles posed by the political conflict between the two major Kurdish parties (the Democratic National Union of Kurdistan and the Kurdistan Democratic Party) over which camp should lead the Kakai forces.

Assi of the Yarstan Institution stressed to Al-Monitor the need for Kakais to choose their own commander in chief. The KDP, however, rejects that idea.

“This party wanted to put the armed Kakai force under the command of the peshmerga forces, which are affiliated with it. It also wanted to appoint a member of the party to be the commander of the force,” Assi added.

Baghdad-based Al-Alam newspaper reported that as a result of this dispute, on July 9, the Ministry of Peshmerga appointed Adel Kakai, a former commander in the Iraqi army, temporary supervisor of the Kakai forces until the parties agree on a new commander.