Will Iraq's minorities return to their homelands post-IS?

As Iraqi forces are advancing against the Islamic State, Iraqi minorities express their worries about the future of their lands post-IS. 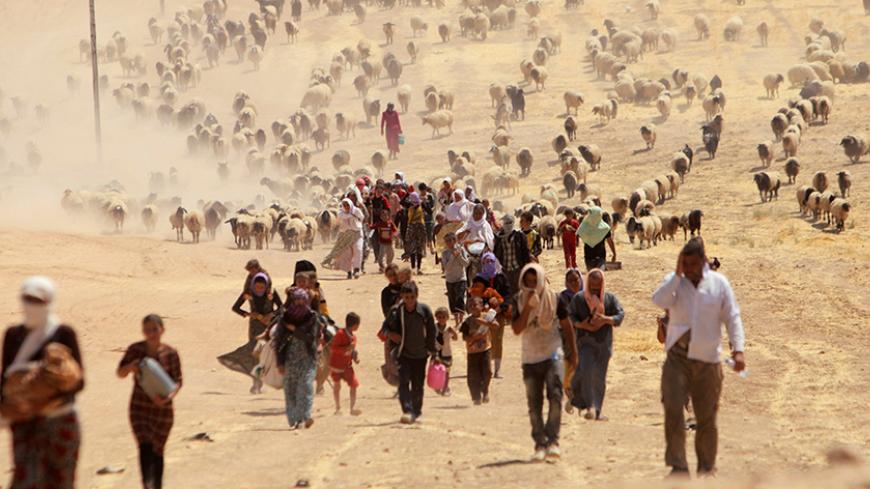 Displaced people from the minority Yazidi sect, fleeing violence from forces loyal to the Islamic State in Sinjar town, walk toward the Syrian border, on the outskirts of Sinjar Mountain, near the Syrian border town of Elierbeh of Hasakah province, Aug. 10, 2014. - REUTERS/Rodi Said

BAGHDAD — With the imminent launch of the operation to liberate Mosul, announced by Iraqi Minister of Defense Khaled al-Obaidi on Aug. 8, the Chaldean National Council — which got together on the occasion of the second anniversary of the displacement of Christians from Mosul — expressed concern about the future of minority areas after the liberation operations end. Representatives of other minority communities share this concern about their areas; the Yazidis are concerned about Sinjar, the Turkmens about Tal Afar and the Shabak community, Christians and other minorities fear for the Ninevah Plains.

These areas are known as “disputed territories,” a description that deprives the minorities from determining their own fate, since it indicates that these areas have long been disputed by the Kurdistan Regional Government (KRG) and the Iraqi federal government.

Prince Breen Tahseen Bek, a representative of the Yazidi royal institute, told Al-Monitor, “When we speak with representatives of the federal government or the KRG, the discourse tends to take a turn toward finding out whether we are with them or against them. The Kurdish and Arab political elites do not take the Yazidi genocide seriously; all they care about is whether our areas will be part of the federal government or the KRG.”

Thus, the representatives of minority communities hope for an internationally supervised negotiation process on the disputed internal borders for areas that are ethnically, religiously and linguistically diversified, but are subject to an Arab-Kurdish conflict that could clearly drag the country into an internal war.

Meanwhile, Pascale Warda, the president of Hammurabi Human Rights and a Christian activist who has served as deputy minister of displacement and migration, said, “Applying Article 125 of the Iraqi Constitution — by turning it into legislation that would ensure self-administration for minorities in the disputed areas and in a way that would ensure keeping them away from the conflict between the major powers — will guarantee these areas’ right to manage their own affairs without its meaning supporting these territories’ desire to disengage.”

Another option is also taking shape, and resorting to it could encourage the return of the displaced people after their areas are liberated from the Islamic State (IS). This option is represented by creating new provinces in the minority areas in order to ease ethnic tension, facilitate the achievement of self-management for minorities, and reduce corruption and injustices that often occur as a result of the local government neglecting these areas.

For instance, an arrangement can be made for Ninevah province to spin off provinces in Sinjar, Tal Afar, Ninevah Plains and Sheikhan, while the remaining area can represent what is left of the original Ninevah province, with Mosul as its center.

Prominent Turkmen politicians support this option; Ali Akram, the head of the Turkmen Rescue Foundation, told Al-Monitor he supports this option, and Torhan al-Mufti, the former minister of state for provincial affairs, had previously told Al-Monitor that such an option could prevent ethnic conflict in the country.

Another advantage of this option is that the new provinces receive an equal budget from the federal government to promote suitable conditions for the return of refugees. In this context, economist Imad Abdel Latif told Al-Monitor, “It is important to devise a plan of return for minority refugees to their regions that are being liberated from IS while providing enough resources to fix the main infrastructure and reform the service system. The individuals who want to return home fear for their security first and do not want to come back unless there is a comfortable alternative for their integration in regions they were displaced to or thinking of immigrating abroad.”

Regaining trust seems pivotal for reconciliation and for any peace agreement in the regions post-IS. This cannot be imagined without first settling the affiliation of these regions, through negotiating with the representatives of minorities, which will ensure their independence from a political conflict between the large Kurdish and Arabic political currents.

Associations that promote the rights of minorities such as MASARAT suggest political recommendations that can contribute to rebuilding trust, and that can encourage the Iraqi federal government to launch several necessary reforms. Such reforms include fighting corruption, enhancing transparency and accountability, holding immediate investigations into the violations of the rights of minorities, canceling legislation that protects discrimination or persecution of minorities, in addition to joining the Rome Statute of the International Criminal Court (ICC) and accepting its jurisdiction over the current conflict.

Tahseen Bek said, “Nothing indicates that the Iraqi government is willing to join the Rome Statute of the ICC, but we can work with it to accept the jurisdiction in one case [genocide of Yazidis] and for a certain time, i.e., for the current conflict. The minority representatives have the right to seek international protection amid the lack of domestic governmental cooperation."

Other minority representatives such as Rajab Assi, who represents the Kakais in Kirkuk, and Diyaa Yaacoub, who represents the Baha'is in Baghdad, told Al-Monitor that the package of reforms must include suggestions about widening the recognition of minorities in the constitution, i.e., the recognition of some religious minorities such as the Baha'is, Kakais, Zoroastrians and Iraqis with African origins. Yaacoub reiterated the need to cancel all legislation inherited from the Baath Party days that opposes constitutional rights, such as banning Baha'i activity, a law issued in 1970.

The representatives of minority communities engaging in these discussions say there is a need for a long-term political plan that includes political, cultural and economic reform aspects to regain the trust of minorities and defeat IS once and for all.