A delegation of the most senior ultra-Orthodox rabbis met with Communications Minister Yoaz Hendel to express their concerns over his panned communication reform. 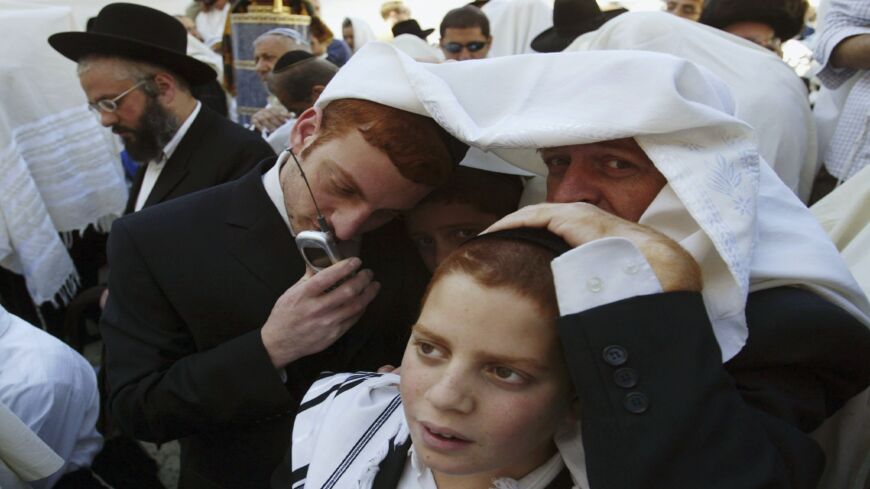 An Israeli ultra-Orthodox Jew talks on a mobile phone as others pray during the Passover blessings at the Wailing Wall on April 26, 2005, in East Jerusalem, Israel. - Uriel Sinai/Getty Images

A delegation of Hassidic leaders and rabbis met Nov. 29 with Communications Minister Yoaz Hendel in what was considered a highly unusual event. So unusual, in fact, that it violated the boycott declared by the ultra-Orthodox community against the new government in which they are no longer represented. No official meetings have been held so far between ultra-Orthodox rabbis and representatives of the government, certainly not widely publicized ones such as the meeting with Hendel.

The rabbinical delegation included the Vizhnitz Rebbe, a leading member of the Torah Sages Council. Its mission was to dissuade Hendel from going through with a planned telecom market reform, which they view as a dire blow to the ultra-Orthodox. The rabbis urged Hendel to stay out of an arena that has been largely off limits to the Communications Ministry until now, which is non-smartphones used by the ultra-Orthodox.

While the cellular phone was a welcome sign of progress for most of society, the rabbis and Hassidic leaders immediately understood its inherent threats to the ultra-Orthodox lifestyle and beliefs and established the Rabbinical Committee for Communications to regulate the issue. This forum turned to mobile phone service providers with a simple request: to provide phones for ultra-Orthodox Jews that can only be used to make or receive calls, without text capabilities or internet connectivity.

With the exception of a newly launched company named Mirs that had previously been active mostly in the wireless telephone market, all of the other companies rejected the demand. Mirs offered a bulky device that was unique in terms of what it lacked: no text messaging capacity, no camera and no advanced software. The device was nonetheless wildly successful, with tens of thousands of new customers signing on to the service within days. The company’s 05331 kosher phone service became an instant hit with the ultra-Orthodox. It did not take long for the other providers to cave in and offer “kosher-level” services enabling only outgoing and incoming phone calls.

The second feature characterizing these phones is the control of the Rabbinical Committee over incoming and outgoing phone numbers. In other words, the committee can exclude the use of phone numbers deemed harmful.

The main example of such phone numbers that could potentially be deemed as harmful is the so-called “information lines,” which serve as substitutes for conventional mass media. As many ultra-Orthodox families ban internet and have no televisions, companies are offering phone numbers with recorded or live information in different domains. The committee can blacklist calls to certain such lines they deem inappropriate for their flock.

This mechanism of controlling phone numbers is called a kosher-level service. Obviously, for this to work, it requires the full cooperation of the phone service provider. But there is more to it. While all Israeli mobile phone subscribers can switch to any provider they want since a market reform instituted several years ago, kosher phone owners can only switch to a different provider if it provides a kosher-level service.

The secret to the kosher phones’ marketing success lies in the mechanism most important to the ultra-Orthodox community: school registration. Those wishing to sign their child up in any ultra-Orthodox educational institution are required to prove that they own a kosher phone rather than a regular, banned one.

The rabbis adopted other measures too, to ensure their control over all aspects of the media. The ultra-Orthodox media, for example, does not advertise products or services that direct consumers to non-kosher phone numbers.

For ultra-Orthodox parents, this mechanism of blacklisting phone numbers guarantees that the phone used by members of the household be filtered for contents unsuitable to children. This need became particular acute during the coronavirus pandemic when the phones became the only means for remote learning given that computers are not generally in use in ultra-Orthodox institutions. Each family bought several such phones according to the number of children in the house.

But just when rabbinical control and support were at their peak, the state authorities intervened, with the Registrar of Associations (the Justice Ministry office tasked with oversight of nonprofit organizations) issuing a devastating report that found financial irregularities in the committee’s operations and appointing a liquidator to dismantle it.

At the same time, some within the ultra-Orthodox community have long been displeased about the Rabbinical Committee’s monopoly on the mobile phone market, prompting demands to allow other groups to certify kosher phones and services, as is the case with the licensing of kosher foods by more than one body.

These critics have declared war on the committee, which they accuse of being run by various wheelers and dealers rather than by the rabbis. Hendel, it seems, has been receptive to these claims, announcing that he would advance a reform allowing the owners of kosher phones to switch to other providers, effectively dismantling the Rabbinical Committee’s control.

Hendel also announced that he would end the committee’s unrivaled control of the contents to which phone users can be exposed. He even met with the owner of a store who was beaten up by protesters for being perceived as taking the side of the Rabbinical Committee’s opponents.

The delegation that met with Hendel made no secret of its members’ concern, pointing to the threats, as they see them, that the planned reform poses to their community.

Hendel, for his part, did not appear overly troubled by these claims, despite his visitors’ important standing. He rejected the rabbis’ claims that Orthodox Jews have a monopoly on virtue and values while non-Orthodox Israeli Jews lack a moral compass, prompting their anger. The rabbis had clearly expected Hendel to be more receptive to their demands, especially after taking the unusual step of coming to his office to talk to him in an era when most government ministers and even prime ministers trouble themselves to the homes of the rabbis out of deference to their position, not the other way around.

The displeasure of the rabbis was reinforced a day later with a letter sent to Hendel by the ultra-Orthodox legislators. The 16 ultra-Orthodox Knesset members expressed in their letter unwavering support for the Rabbinical Committee, demanding Hendel refrain from targeting the kosher-level service. Other rabbis and ultra-Orthodox students expressed yesterday their outrage at what they considered disrespect by Hendel vis-a-vis the Sages.