Israel's ultra-Orthodox leadership is encouraging its community to access only filtered Internet content and use ''kosher'' smartphones, as technology makes it harder and harder to block unwanted material. 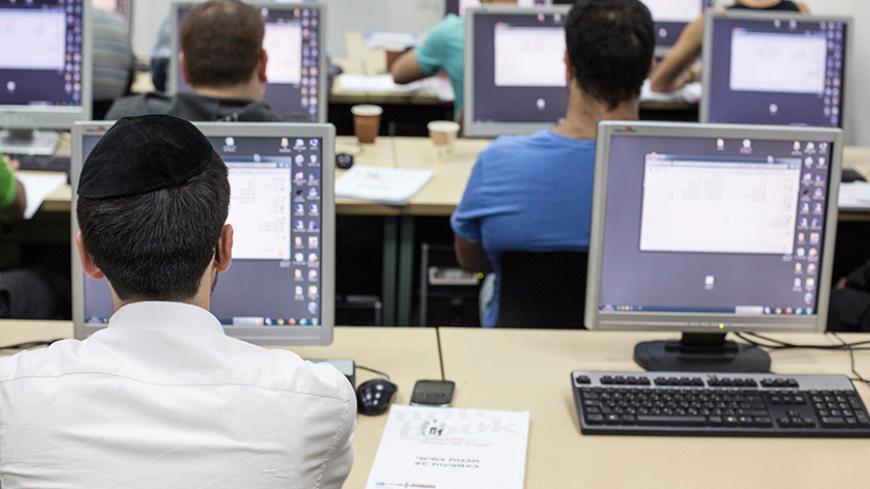 In recent years the Internet has made inroads in the ultra-Orthodox sector, much to the chagrin of its leadership. As far as the leaders are concerned, the Internet is a disaster — it represents an all-out threat against good old ultra-Orthodox separatism, its social and community circles and its family and modesty values. They believe the Internet encourages exposure to content that contradicts the Torah and Jewish halachic law.

The ultra-Orthodox community fully understood about a decade ago that the Internet was going to be a problem, holding its first anti-Internet rally in the ultra-Orthodox town of Bnei Brak in 2006 with the participation of rabbis and educators. Two years earlier, in 2004, the ultra-Orthodox had already set up a “rabbinical council on matters of media” and a “kosher” cellphone was developed for the ultra-Orthodox — a device that can only be used to make and get calls, without access to the Internet and to “content services” that at the time included chat rooms and call centers that supplied sports news and gossip.

In 2012, digital experts from the ultra-Orthodox sector did develop a kosher smartphone, but sales were restricted to business people and others who needed such phones, as determined by a community rabbi. Solutions were also offered for domestic use of the Internet with various content-blocking software installed on home computers.

In recent months, the fight against the Internet, whether on smartphones or desktop computers, is making headlines once more. Rallies have sprung up against use of the Internet in the young ultra-Orthodox towns of Beitar Ilit and Modi’in Ilit. These demonstrations have been accompanied by ad campaigns calling on the public to refrain from owning a non-kosher phone and accessing the uncensored Internet.

“The struggle against the Internet in the ultra-Orthodox sector is very important,” a source in the rabbinical council on media matters told Al-Monitor on condition of anonymity. “Ultra-Orthodox society has conservative values and is more vulnerable to the dangers of the Web compared to other groups. We want to preserve our community values, and the Internet is undoubtedly a tool that encourages the undermining of such values. We see clearly that exposure to the Web, even through various filters, consistently damages the religiosity of the user.”

Yehiel Twersky is an ultra-Orthodox Internet entrepreneur. The founder of a popular news site, he is the CEO of Magna, a firm that supplies blocking solutions for smartphones. “In 2016, ultra-Orthodoxy and the Internet have to go hand-in-hand, because one cannot work today without access to the Internet,” he told Al-Monitor. “In principle, the very act of surfing and having the entire world at your fingertips is contradictory to conservative ultra-Orthodox values. So maybe it’s not ideal, but today there’s no choice. The main challenge in which we must invest all our efforts is to educate people about the correct use of the Internet and at the same time to develop solutions for filtering Web content.”

Twersky, formerly the director of content filtering for the Israeli Nativ Internet service provider, claims that with each passing day, more ultra-Orthodox Jews connect to the Internet. “Thirty percent of the ultra-Orthodox sector are connected to limited-access Internet, and the numbers keep growing by the month. There are those in the community who are also hooked up to unlimited Internet,” he said. “Most of those who are connected need the Internet, and judging by the pace of technological developments, in the coming years everyone will have to have Internet access.”

Twersky is convinced that those leading the struggle against the Internet understand there is no way it can be eliminated. “I see the rallies as more in the way of warning signs than of stop signs. They are meant mainly to make clear that the Internet is dangerous territory,” he said. “I assume there’s no one who truly thinks the wheel can be turned back.”

Margaliot added, “In Beitar ilit, for example, which is an ultra-Orthodox town of some 10,000 families, there are 2,200 profiles with the town’s name as their location. This is huge! Keep in mind that not everyone gives their location and not everyone has a Facebook profile. The Internet has taken strong hold of ultra-Orthodox society and the struggle against it is not realistic.”

According to Margaliot, the rabbis also understand that things have changed. “Until a few years ago, they conducted an all-out struggle against the Internet. Today there is more flexibility; there’s a perception that there’s no choice and an understanding that this is here to stay. That’s why there’s lots of talk about filtering.”

The ultra-Orthodox fight against the Internet is a fight to protect their society against external influences. In that sense, this struggle is for survival. The large numbers of ultra-Orthodox who are connected to a kosher Internet service show that their leaders have failed to distance them from the Internet, but nonetheless succeeded, at least partly, in promoting the perception that the Internet is a tool that must be used with caution.

Beyond that, all those interviewed for this piece agree that the penetration of the Internet into ultra-Orthodox society is still in its infancy.