The leadership of the ultra-Orthodox communities in Israel are against the internet, but more and more ultra-Orthodox businesses find ways to be part of the digital arena. 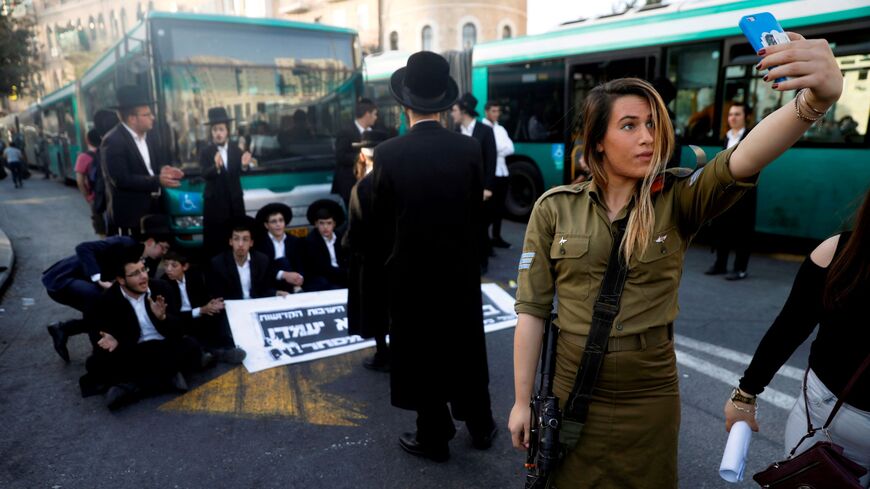 A female Israeli soldier uses her cell phone to take a selfie with ultra-Orthodox Jewish demonstrators in the background on Oct. 19, 2017. - MENAHEM KAHANA/AFP via Getty Images

“As far as the ultra-Orthodox leadership is concerned, there’s no internet in the community," said Shimon Barsky, an ultra-Orthodox yeshiva student who works in sales of smart but “kosher” cellphones. Communication Minister Yoaz Hendel's proposed discontinuation of those phones (with allegedly offensive content blocked), is frozen now following a lawsuit filed by the ultra-Orthodox members of Knesset. But, Barsky said, "those very same Knesset members who sat in the courtroom as plaintiffs were seen using their smartphones as they awaited the court’s decision.”

Barsky's target market is broad and in the mainstream of the ultra-Orthodox public. “I sell smart devices, and I’m not the only one. There’s a lot of demand,” he says.

“Officially, the digital world has no foothold in ultra-Orthodox public life. I don’t advertise the [smart] devices I sell in mainstream ultra-Orthodox newspapers, and ultra-Orthodox institutions won’t publicize WhatsApp numbers where you can reach them," he continued. "But in practice? Every other ultra-Orthodox person has a smartphone, and even if marketing doesn’t happen openly, sales take place at a huge scale.”

A well-known hospital in the center of Israel is now attempting to install a system that would allow anyone who has a smartphone to receive information from the hospital. But would the hospital’s large ultra-Orthodox clientele be excluded?

“We looked carefully into this issue,” a hospital official told Al-Monitor on condition of anonymity, “and found that not only does this not exclude the ultra-Orthodox, but the opposite. A survey we conducted found that clients among the ultra-Orthodox were excited at the possibility of receiving notifications accessibly and quickly online. However, we must make sure the service can get past the filters set by the ultra-Orthodox leadership.”

It turns out, then, that the digital sphere is not foreign to the ultra-Orthodox. Torah lessons from top yeshiva educators are provided on internet platforms like Kol HaLashon and Beneinu. Digital journalism circulates by email and WhatsApp, and advanced systems can even ‘translate’ messages sent as text into voice messages that reach phones.

However, there’s a clear distinction between “public” ultra-Orthodoxy that doesn’t recognize the world of the internet, and the ultra-Orthodox individual, who is not excluded from the internet – quite the opposite.

Hundreds of people participated at conferences organized recently by groups like Kamatech, which aims to facilitate ultra-Orthodox entrepreneurs in the digital sphere and connect them with potential investors, or the “Sages in Digital” conference held by Gil Digital, which is part of the Gil Group, a media and marketing group working in the ultra-Orthodox sector.

The large participation in these conferences indicates yet again that the ultra-Orthodox community indeed lives in the digital world, knows it well and even uses it frequently and effectively.

There are still some limits. Facebook advertisement is apparently ineffective, since ultra-Orthodox leadership considers this social media to be too provocative and invasive.  On the other hand, and this is quite unique for the ultra-Orthodox sector, many ultra-Orthodox businesses use the “statuses” on WhatsApp for advertising and marketing.

Ultra-Orthodox Yehezkel Hershberg of Ashdod owns the Legima brand that markets alcoholic drinks through a website. “When it comes down to it, the ultra-Orthodox sector is not different from the general public," he said. Some thought that his business plan was foolish, "but I went ahead after a deep survey I conducted that showed that the ultra-Orthodox do buy alcohol, a lot, but in ways unique to the sector, that is, kosher drinks, sweet alcoholic drinks, consumed especially before the holidays.”

Barsky, the phone salesman, agrees with Hershberg. “Smartphones penetrate the sector," he said, but with content blockers installed. And, he said, "nearly every smartphone owner will also own a ‘dumb’ phone which he’ll place on the table [in meetings], while keeping his smartphone in his pocket. I don’t see it as hypocrisy."

Further, he said, “we now see more and more businesses that include the icon of their WhatsApp number next to their phone number, not to speak of a website. Still, there are clear rules that you have to know in order to sell a product to the ultra-Orthodox. The same goes for the digital sphere: the ultra-Orthodox are present here, but you have to know how to approach them in this sphere as well.”