Israel’s ministry of trade and industry estimates that many ultra-Orthodox are digitally illiterate, but much of the community avoids the internet by choice. 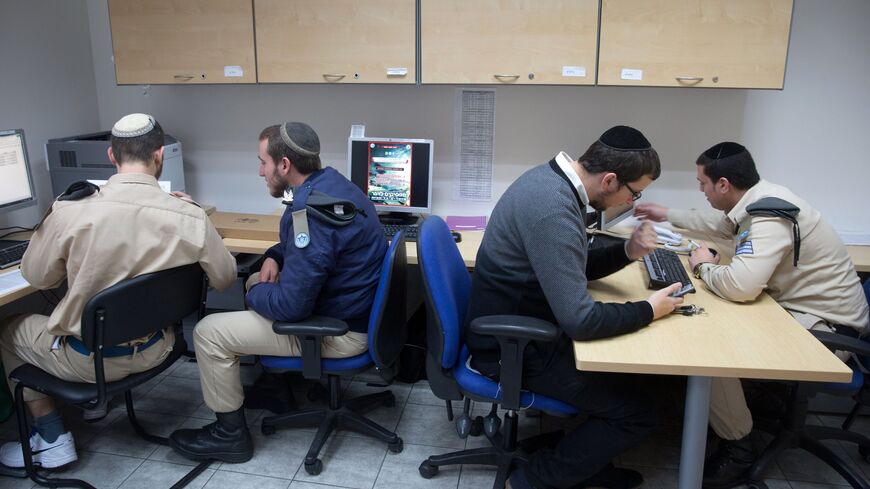 Israeli soldiers of the Shachar Kachol Ultra-Orthodox Jewish unit work in front of computers at their army base in Tel Aviv on December 17, 2015. - MENAHEM KAHANA/AFP via Getty Images

Israel’s Economy Ministry plans to invest 70 million shekels to promote digital literacy in the ultra-orthodox and Arab sectors, with the goal of connecting these populations to the internet.

The program is supposed to operate in more than 100 local authorities, ultra-orthodox and Arab, with the goal of providing basic internet training for some 100,000 residents at employment-formation centers.

The Economy Ministry feels that it is important for the ultra-Orthodox, to join the digital world in order to integrate in the work market. The ministry hopes that the new program will create more internet use within the ultra-Orthodox public within a year. The program is mostly aimed at younger people, but the ministry wants to reach older age groups as well.

The current population census by the Central Bureau of Statistics, operating under the Prime Minister's Office, reported that relatively large percentages of the ultra-Orthodox public participated online. The biggest surprise of all, according to the census people, is the rates of online participation in towns with especially large ultra-Orthodox populations, such as Modi’in Ilite, Rechasim, Beit Shemesh, Bnei Brak and Beitar Elite. For example, 31% of Beitar Elite residents responded, out of which about 50% did so online.

So, is the ultra-Orthodox public connected or not? Should resources be directed to “revealing the internet” or is it unnecessary?

The answers to these questions are very complicated, and essentially contradictory and inconsistent. On the one hand, many ultra-Orthodox have been avoiding the internet for years. They fear that their children will be exposed to indecent content, or that it will lead to spiritual decline.

Many people reveal that even in the current era, they can get by offline. “Internet? Don’t know anything about it,” was the answer we received from Yankel [who asked that his full name not be disclosed], a successful ultra-Orthodox businessman in his forties. And no, he does not feel that he is forced to “sacrifice” anything due to his decision.

At the bank, Yankel keeps track of his accounts, deposits, checks and transfers, via the automatic systems near the various bank branches. A large number of those apparatuses are found near banks in ultra-Orthodox centers, since many of the bank’s customers cannot connect from their homes.

Simultaneously, with the encouragement of the rabbis, ‘internet rooms’ have arisen, for married yeshiva students alone, and supervised to ensure that the users can only surf in filtered sites.

The ultra-Orthodox public also enjoys many advanced services via the simple telephone. Let there be no doubt: we are not talking about the smartphone, but the ‘kosher phone’ which, of course, has no functions aside from telephone calls. They cannot be used even to send SMS messages.

Thus, for example, the ultra-Orthodox public — viewed as the leading consumer of public transportation — enjoys systems that share the locations of buses in real time. They have public-transportation monthly cards that they fill via an audio system, based only on dialing.

The telephone enables listening to a wide variety of Torah lectures, with possibilities such as jumping to a specific lesson and then returning to specific lectures. The phone also enables bank activities, payments, even keeping track of stocks; signing up for events, selling products, comparing prices. One system allows people to enter family income and expenses.

Also, a booming industry of “Voice WhatsApp” lets familial or sectarian groups hold discussions and make announcements. Of course, unlike the WhatsApp groups we are familiar with, these are not written announcements but voice ones.

“I don’t lack anything, I have no limitations,” Yankel emphasizes. He reveals that even though he has business dealings with numerous clients and suppliers from the secular sector, all the dealings are conducted via the telephone.

Thus, on the one hand, many ultra-Orthodox people like Yankel manage institutions, work as construction contractors, mediators, trade on the stock market and more, without email, and have no idea how to use Google. On the other hand, some of the ultra-Orthodox people who use the internet, actually do it in the framework of their Torah studies, searching for materials for religious compositions and researches.

This contradiction was perfectly illustrated some two months ago, when several leading rabbis campaigned against what they called “the dangers of technology.” The rabbis warned that even more insular Hasidic communities were not immune to the dangers of the internet.

As part of those Sabbath assemblies and conferences, encounters were held in which businessmen revealed that they worked without a smartphone or even a computer. They claimed that as a result, their output only increased. The rabbis made sure to warn the public about many cases in which ultra-Orthodox Jews, including well-known Torah figures, “fell by the wayside” to the internet. Once they started surfing the net, they said, they were unable to stop.

Faced with such opposition, the ultra-Orthodox who do use internet try being discreet about it. It seems that the ultra-Orthodox establishment does not intend to cooperate with the Economy Ministry's project. In fact, the initiative will probably face stubborn opposition and vocal protest.

Judging by reactions Al-Monitor heard, many view the initiative as another plot or conspiracy concocted by the secular establishment to secularize the public. At the same time, there are also young ultra-Orthodox who want to take advantage of the possibilities, mainly in order to build themselves a future in the labor market.