While the Knesset was electing a president, tens of thousands of ultra-Orthodox Jews were gathered nearby to celebrate the wedding of the Belzer rebbe’s granddaughter, two events so close physically, yet socially and ideologically miles apart. 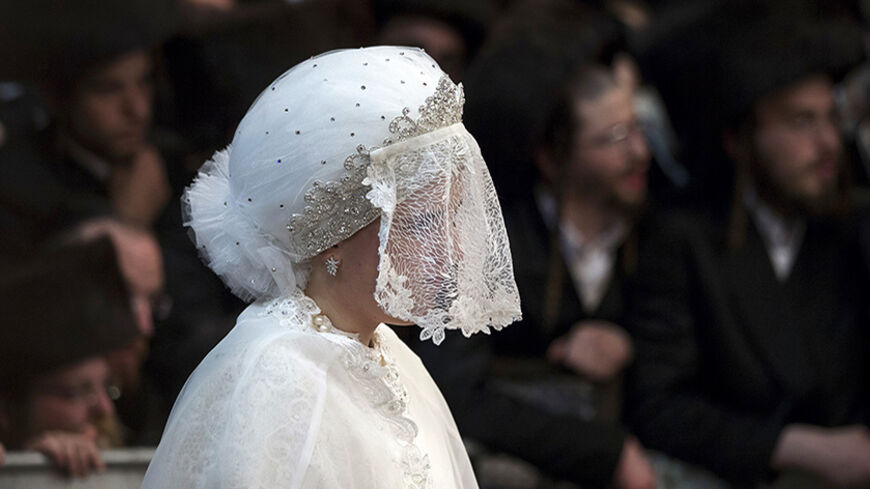 Ultra-Orthodox Jewish bride Esther Rokeach waits for the start of the "mitzva tantz," the custom in which relatives dance before the bride after her wedding ceremony, in Jerusalem, June 11, 2014.

Jerusalem experienced two big events this week. The election of a new president on June 10 captivated Israelis, who followed the breathtaking drama underway in the Knesset. Not too far from there, an enormous event was underway, captivating the hearts and minds of the ultra-Orthodox world in Israel and overseas. The Belzer rebbe, Rabbi Yissachar Dov Rokeach, was marrying off his granddaughter to a 17-year-old rabbinical college student.

The two events, which presented a portrait of contemporary Israel, took place just a kilometer [0.62 mile] apart in the same city, but without the wedding guests taking any interest in what was happening in the Knesset and without the people in the Knesset even knowing about the immense ultra-Orthodox celebration. The two worlds living side by side are so completely different that they practically ignore each other. One world speaks Hebrew, and the other speaks Yiddish. One group regards itself as Israeli, and the other sees itself as Jewish. One group acts according to democratic principles, and the other offers blind obedience to the leadership of the Hassidic court.

There was never any chance that the wedding’s participants would have followed the clash over who would be elected Israel’s 10th president. The tens of thousands of invited guests at the “royal wedding” were asked well in advance to leave their cell phones outside. Only people with “kosher” phones, without access to the Internet, were allowed in. Posters plastered throughout the city issued a stern warning to guests from Israel and overseas “not to enter the study hall with smartphones that are unfiltered.”

Belz is the second largest Hassidic court in the Jewish world, with tens of thousands of followers across the United States and Europe. Their way of life has barely changed since the group was founded in Galicia, Poland, some 200 years ago. Today, they have a huge impact on the ultra-Orthodox world in Israel. Along with the Gur Hassidic court, they set the tone when it comes to shaping the lives of the original ultra-Orthodox community.

According to pundits’ projections, by 2020 every second student to enter the first grade in Jerusalem will be Orthodox. A study conducted by the Jerusalem Institute for Israel Studies anticipates that the percentage of ultra-Orthodox Jews in Jerusalem will reach 44% by that year and will soar to 50% by 2030. Other statistics shed light on the remarkable growth of the ultra-Orthodox population. When Israel was established, there were just 40,000 ultra-Orthodox Jews in the country. Today there are 800,000, constituting 10% of the total population.

“I don’t understand your panic,” Rabbi Eli Kaufman tried to console me. Kaufman is a devout ultra-Orthodox Jew who keeps close tabs on the inner workings of the Belz Hassidic court. “The wheel is just turning back to where it was. Jerusalem will be entirely ultra-Orthodox before long. Before the state was established, we were Jews. We didn’t know what it meant to be secular or what it meant to be Israeli. God willing, in the end, we will all go back to being Jews.”

Back to the royal wedding of the 17-year-old girl to the boy of her heart’s choosing: It took place in the Hassidic court’s great synagogue, said to be the largest in the world. Upon leaving the Knesset, I turned toward the site of the celebration, hoping to get a rare glimpse of that “other way of life.” The roads throughout the neighborhood were blocked, and guards in festive dress — long black frock coats and a carefully groomed streimel (traditional fur hat) — assessed all the onlookers. Invited guests from Israel and overseas were asked to show their invitations to the wedding. I was stopped at the last roadblock before the actual site of the event. I was prohibited from entering the hall, not because I looked secular, but because I didn’t have an invitation.

I found myself surrounded by the hundreds of ultra-Orthodox Jews who were also on the outside. They stood totally mesmerized as they watched events in the hall unfold on a large screen set up for the occasion. Their joyful cheers could be heard hundreds of meters away. The thousands of guests who crowded into the hall were hoarse from singing Hassidic melodies as they clapped and stomped their feet. “This isn’t just a wedding,” a rabbinical college student named Yisrael Friedman explained to me. “It is a demonstration of enormous political forces, intended to show the entire Jewish world just how strong the Belz Hassidic court really is.”

The bride and groom could not be seen in the hall. They disappeared from beneath the huppah (wedding canopy), once the elaborate ceremony was over. In keeping with the custom of the ultra-Orthodox world, they went to a special yichud (separation) room, which had been prepared for them well in advance. In many instances, this would be the first time that the bride and groom see each other since being formally engaged. Once there, the bride, who is covered from head to toe, reveals her face to her new husband. While the couple has its first encounter, tens of thousands of guests wait anxiously outside for them to emerge from the room. People in the know say that the couple have their first intimate encounter in the yichud room. Most of the young men learn about the experience by poring over the Talmudic texts, which offer an almost complete “menu” for the occasion. The bride receives her education from the women in her family.

The celebration reached the height of excitement when the young couple exited the yichud room and joined the festivities. Thousands of guests greeted them with delirious singing and dancing. The wedding finally came to a close in the wee hours of the morning, and guests joined the new groom in reciting morning prayers.

“You have no idea what you’re missing,” Friedman, the rabbinical student, tried to convince me. “You secular Jews live in a world without values. The ultra-Orthodox world offers you life, a recipe for a pure life, and a reason to live. When I go to [the ultra-Orthodox city of] Bnei Brak, I see four-year-olds on the bus with iPhones, which they can use to see everything. The generation you are raising is miserable, and when it grows up, it will have nothing to cling to.”

Friedman, like Kaufman, is convinced that it is just a matter of time before the secular world in Israel discovers the “shining path” to the Jewish way of life.