Akiva Eldar writes that Israel is being distracted from the real ultra-Orthodox issue: Integration into civil society is more urgent than being drafted into the army. 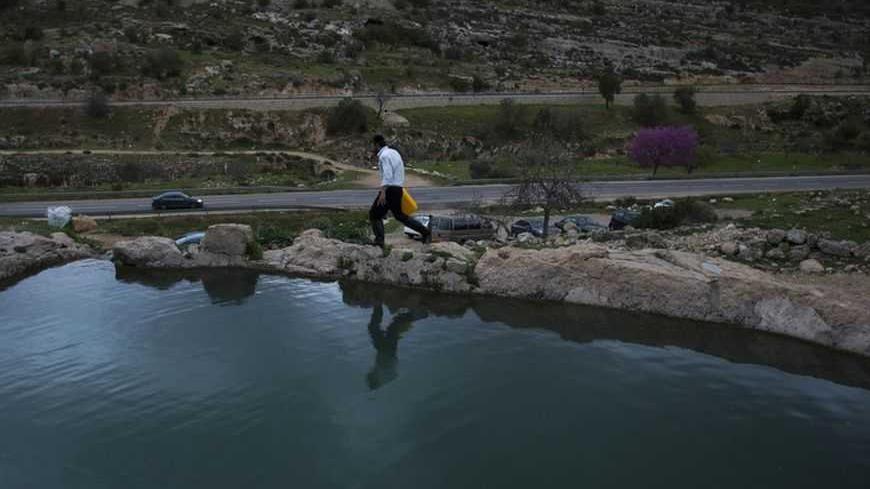 An ultra-Orthodox Jewish man walks next to a spring water reservoir before taking part in the ritual of "Mayim Shelanu" near Jerusalem Mar. 17, 2013. - REUTERS/Ronen Zvulun

The two texts I cite below were written rather recently by ultra-Orthodox Jews. The first is an opinion piece by Knesset Member Israel Eichler of the Yahadut HaTorah party. It appeared on the “BeHadrei Haredim” website under the title, “God Will Settle the Score with Anyone Who Hates the Torah.” The second consists of select quotes from an email that appeared in my Facebook mailbox. It was written by Yossi S., an ultra-Orthodox Jew who lives within the ultra-Orthodox world, but who still manages to see things differently somehow. Yossi writes that he is a loyal follower of my columns, in which I "mock the nationalism, zealotry, and arrogance that consume every positive aspect of Israel.” The difference between these two texts sheds some light on a murky corner of the debate surrounding what is called “sharing the burden.”

This is what Knesset Member Eichler wrote:

“Loyal Jews in the Land of Israel are living in a time of harsh decrees, and no one can foresee how it will end. Ultra-Orthodox Jews are entering their bunkers, and the One who settled the score with the generation of the Flood and all haters of Israel throughout the generations will similarly settle the score with anyone who harms the world of the Torah. It is time to put on the table their [secular] lie of bearing the burden. The army doesn’t create Jewish identity. The compulsory draft serves as a melting pot, intended to transform young people into slaves of the secular regime, just like in Cuba and North Korea, or the Soviet Union and China. There is no moral justification for forcibly drafting people, unless there is no other option. In this case there are plenty of other security options, apart from compulsory drafting of civil servants. It is forbidden to enter any melting pot that causes Jews to abandon their religion. [Exposing them] to the drafting of girls, violations of the Sabbath, and the lewd environment that one finds among the goyim [Gentiles] is anti-religious coercion, and not some security prerequisite. Therefore, this is not a security debate but a spiritual war of survival.”

This is what Yossi S. wrote:

“I am an ultra-Orthodox Jew who grew up censored from all information (as you well know … ). Gradually, as I got older, I also opened up and realized that it doesn’t matter where the rebbe will be spending the Sabbath, and what leftovers he will hand out to his disciples … I connected quietly to the internet (because if I did so openly, they would shun me, threaten me, and make problems for my children in their Talmud Torah [primary religious] schools), and through that I discovered that we have a wonderful culture in our country, rich in theater, the arts, and just about everything. I began reading voraciously, like someone who hasn’t had water for a very long time and suddenly finds a well. Whatever I don’t understand, I Google. Whenever I don’t know a song on “Israeli Idol,” I check out the words and learn them. I enjoy the rich cultural world that has opened up to me. But I do all of that quietly … The secular community should be grateful every day for the freedom and openness they enjoy, since the light is only noticed in its absence. … I would be very pleased if you would befriend me on Facebook.”

I was happy to befriend him. While I was doing that, I thought about what he wrote concerning “freedom of choice.” In a society in which military service has made the transition from being a necessary means to an end into a supreme value, it is much easier to chant slogans like “sharing the burden” than to get to the root of the problem: freedom of choice and equal opportunities for all. It is much easier for political wheeler-dealers like Eichler to focus on drafting yeshiva [religious college] students and present it as anti-religious coercion. Clichés such as “forcing Jews to abandon their religion” hide behind them the phenomenon of internal religious coercion that Yossi’s email raises. The ultra-Orthodox establishment’s opposition to core studies, the internet, and television is no different from its antagonism 360 years ago, which led to the cruel excommunication of Baruch Spinoza by the Jewish community of Amsterdam and its rabbis. In their mind, that gifted philosopher sinned by advocating the exchange of primal anxieties and superstitions for rationalism and skepticism—concepts that threatened the authority of “Torah scholars.” As Professor Moshe Halbertal wrote last month in Haaretz daily, the rabbis will never agree, and rightly so as far as they are concerned, to have their control over the education of vast numbers of young people taken away from them, leaving those children exposed to the “evil winds” blowing outside their communities. Zionism offered a new identity, and the modern, refined version of it now passes through the gates of the Bakum military absorption base. Such concepts as solidarity and a common destiny, integral to this new identity, threaten “our zayde’s (grandfather’s)” traditions.

Paradoxically, perhaps, the fact that the general public and the media are so focused on the issue of drafting everyone makes it easier for ultra-Orthodox leaders. It absolves them from participating in any serious debate about the integration of the ultra-Orthodox into Israeli society in general and the workforce in particular.

Halbertal, a professor of Philosophy, Jewish Philosophy, and Law, is himself an Orthodox Jew. He contends that there is an internal ideological consistency in this position, and that it proposes a deeply rooted alternative to the Jewish life that arose as a result of modernity. At the same time, he also points to an underlying moral defect in a society that negates the very existence of the state but is nonetheless dependent on it economically. He is bothered by the fact that the changes to the ultra-Orthodox lifestyle resulting from political agreements that fostered the community’s artificial economic dependence on the state actually help to keep the community in check. Tens of thousands of men and women like Yossi are being held hostage by a framework that does not leave them any way to escape, because it hasn’t prepared them for life outside the community. This is especially difficult for those yeshiva students who cannot claim that “Torato Omanuto” [The Torah is their occupation], regardless of whether this is because of their inclinations or their skill set (or lack thereof). They want to escape the cycle of poverty and unemployment. They no longer want to be dependent on the community or on their wives, who are forced to support large families alone.

The numbers tell the whole story.

According to figures released by the Ministry of Industry and Trade for 2010, some 56 percent of the 700,000 Haredim in Israel live below the poverty line. They constitute 20 percent of the poor among the total population. The total percentage of Haredim in the total population now stands at 9 percent, and it is expected to rise to 12–15 percent by 2025. As a result of the ongoing collaboration between the ultra-Orthodox and the secular establishments, the number of students in the ultra-Orthodox educational system jumped from 6 percent in the early 1990s to 20 percent in 2009. It is expected to reach 22 percent in another two years. The number of ultra-Orthodox Jews in Israel aged 20–24 who devote all their time to Torah study now stands at 85 percent. By way of comparison, in London the figure stands at 36 percent. According to figures released by the OECD (Organization for Economic Cooperation and Development), the employment rate of ultra-Orthodox men in Israel is 37.4 percent, while the employment rate for women is 49.1 percent. This stands in stark contrast to respective rates of 83 and 62 percent in other member countries of the organization.

At a 2008 lecture delivered at a conference of the Jerusalem Institute for the Study of Israel, Professor Menachem Friedman, an authority on ultra-Orthodox society, claimed that its continued existence as a society of learners depends on the surrounding Western society being a modern, liberal, and pluralistic welfare society that is culturally and technologically developed. But that is also the Achilles’ heel of ultra-Orthodox society. Its impressive success at maintaining a distinct identity as a culture and society, along with a high birthrate, the integration of new sectors—primarily from the North African Jewish and the National-Religious communities—and the lack of any basic education, all serve to increase ultra-Orthodox society’s basic needs. The Israeli economy bears the burden of supporting them. As their numbers increase, so does the economic burden they pose. This, in turn, impairs Israel’s ability to compete in the global market.

Yesh Atid chairperson Yair Lapid and HaBayit HaYehudi leader Naftali Bennett did a great deed by excluding Eichler from the “game of politics.” Eichler, a member of the Belz Hasidic group, is a political wheeler-dealer who, in the piece quoted above, screamed bloody murder against the new government’s intention to draft young ultra-Orthodox men into the army. Now that they have taken key positions in the government, they can provide a more serious and inclusive interpretation to the slogan of “sharing the burden.” The first step would be to strip away the slogan’s army uniform. Military reserve cards have long since stopped being an exclusive invitation into Israeli society. By the way, did Yair Lapid, who spent his military service on the editorial board of the Bamahane IDF newspaper, and Naftali Bennett, who risked his life repeatedly on commando operations with the Matkal unit, share the burden equally? Think of Yossi as a kind of modern-day Baruch Spinoza, who lives in fear of being excommunicated by a society that counts Eichler as one of its senior representatives. “Brother Yossi” (to use the New Age jargon that Bennett adopted in his election campaign), is waiting for that to happen. So are many thousands of his friends and colleagues.

“On the first season of ‘The Voice,’ I discovered an amazing song named ‘Easy’ by Lionel Richie," Yossi wrote to me on Facebook. “It has an incredible line: ‘I want to be free to know the things I do are right.’ In other words, in order to reject something, you have to try it first. The problem with us is that we aren’t even allowed the freedom to try things. I hope that one day even the ultra-Orthodox community will live by the principle of 'live and let live,' as each person sees fit, so that we can join in the game of politics and culture. I hope that we will not have to follow all the rabbis and politicians automatically, and I hope to enjoy life for its own sake.”