Israel scrambles to deal with spike in violence in Jerusalem

An Israeli woman was stabbed yesterday in Jerusalem, in another violent incident perpetrated by a Palestinian. 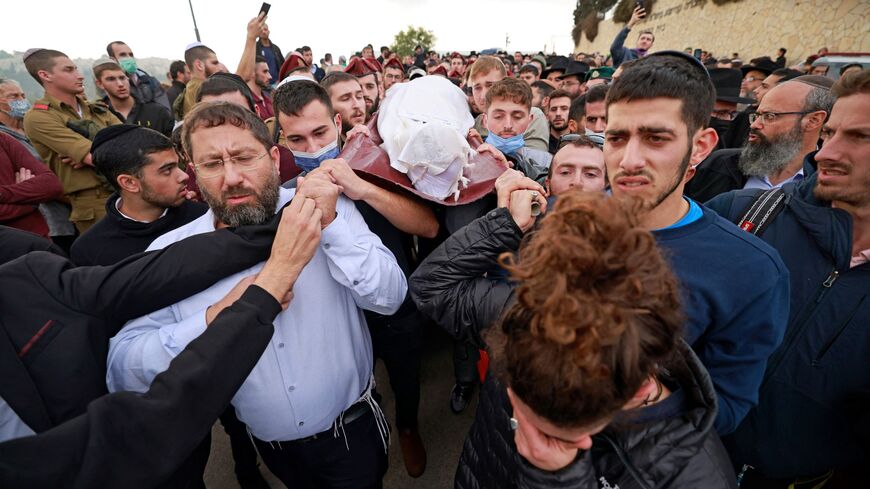 Mourners carry the body of 25-year-old Eliyahu Kay during his funeral in Jerusalem on Nov. 22, 2021, a day after he was killed by a Palestinian gunman while on his way to the Western Wall in the Old City. - MENAHEM KAHANA/AFP via Getty Images

After months of relative quiet, the Palestinian front is again in the headlines.  Yesterday morning (Dec. 8) a 26-year-old Israeli woman was stabbed in front of her children as she was on her way to drop them off at daycare. The suspect, a Palestinian girl of 15, ran from the scene and was caught shortly afterwards. The condition of the victim was initially declared critical, but later the Hadassah hospital in Jerusalem, where she was taken, reported that her injuries were light.

This is the sixth time in the past six weeks that a Palestinian attacker has shot, stabbed, or run over Israelis. Most of the attacks took place in the Old City of Jerusalem, but one was in the West Bank, and another in the city of Jaffa in Israel.

Reportedly, Israeli security forces haven’t found any connection between the attackers. The basis is usually the personal distress of the attacker, who has given up on life or wishes to rebel, and to end life as a “hero." Two days ago, a 16-year-old boy from Nablus fought with his father, stole his car, and drove fast in order to run over Israelis at the Te’enim West Bank checkpoint next to Tulkarem. The youth struck the checkpoint at a speed of 100 km/hr, moderately injured an Israeli security guard, and was shot to death by other guards at the scene.

The phenomenon that Israeli security forces call “the copycat effect” is probably also at work. The attack that inspired the current terrorist wave may have been the one in the Old City of Jerusalem on Nov. 21, where a young Jewish man, Eliyahu David Kay, was murdered near the Western Wall. Also, videos on social media showed a stabbing attack where a Jewish citizen was wounded at the Damascus Gate on Dec. 5.

According to Israeli security sources, all of the recent attacks occurred without organizational affiliation, which makes it very difficult for the Shin Ben and army intelligence to provide early warning. Only the man who killed Kay was a member of a terrorist organization — the political arm of Hamas — but he apparently carried out the attack on his own initiative.

As of now, most of the attacks have been concentrated in the Old City of Jerusalem, but everything that occurs in Jerusalem can impact the security situation in the West Bank or the Gaza Strip.

Israeli security forces worry about not only individual attackers, but also, especially, attempts by Hamas in the Gaza Strip to ignite the West Bank and perpetrate a series of attacks. Only recently Israel exposed such an attempt by Hamas, directed from Gaza and from abroad.

At this time, Israeli security forces do not foresee the start of a wave of terrorism. As long as a fatal or unusual attack doesn’t take place, and the attacks don’t spill out to the West Bank, Israel will probably not reinforce troops in the West Bank or take other exceptional steps.

However, in recent days the Israeli security establishment has discussed concerns that a terror wave could also ignite violence in Jewish/Arab mixed cities within Israel, as occurred during Operation Guardian of the Walls this past May.