The Israeli government has signed on to the European Union’s 2021-2027 Horizon program, which offers funding and cooperation on research and development in various domains. 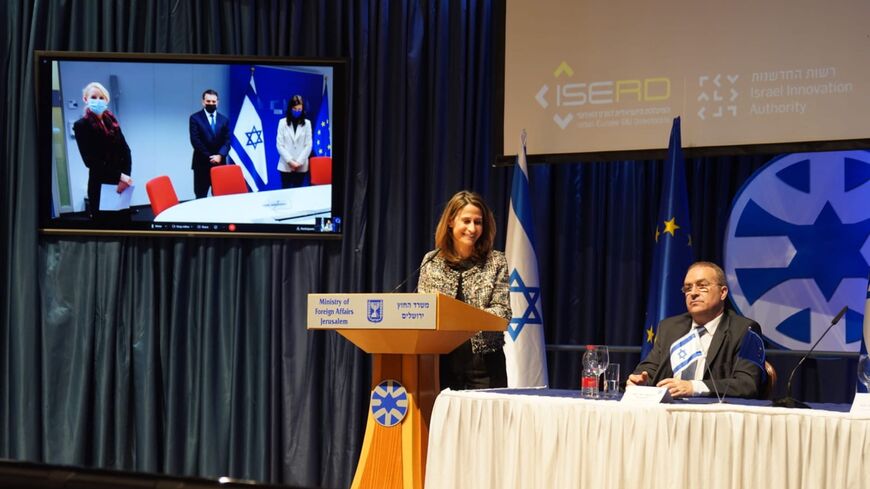 Minister of Innovation, Science and Technology Orit Farkash Hacohen participates virtually from Jerusalem in the signing in Brussels of the agreement for Israel to join the 2021-2027 Europe Horizon Program Dec. 6, 2021. - Michael Dimenstein/GPO

Israel signed an agreement with the European Union Dec. 6 to join the 2021-2027 Horizon Europe research and development program. The program, the largest of its kind in the world, focuses on international cooperation in science and industry and has a budget of 95.5 billion euros, making it a major source of funding in these fields. It is the ninth such R&D program sponsored by the EU. Commissioner for Innovation, Research, Culture, Education and Youth Mariya Gabriel signed the agreement in Brussels with Haim Regev, Israel’s ambassador to the European Union and NATO.

The agreement will allow Israel to remain at the forefront of worldwide scientific and technological development as an innovation pioneer in several major fields, including cyber technology, agricultural technology, food tech and green technology. Research funded by the previous programs can be largely credited for Israel’s successful projects in science and advanced technology.

Joining the European program is also important diplomatically. It will rehabilitate and deepen Israel’s relations with the EU, a priority set by Foreign Minister Yair Lapid when he took office. While the program will not provide grants to Israeli groups in West Bank settlements, politicians on the right including former Prime Minister Benjamin Netanyahu and Prime Minister Naftali Bennett are enthusiastic supporters of Israel joining Horizon Europe.

After the signing Lapid said in a statement, “Israel’s joining the Horizon program, which is the flagship program in Israel’s relationship with the EU, is an important diplomatic achievement and another step to strengthening ties with European countries and the European Union. Israel has a lot to offer the biggest and most important research and development program in the world. Joining today will help Israel stay at the forefront of global research.”

Minister of Innovation, Science, and Technology Orit Farkash Hacohen said that joining “the largest and most prestigious research and development program in the world is another example of how Israeli expertise transcends boundaries and continents. This is the 25th year in which Israel has participated in the project. It is a leader in the number of grants received by its researchers and companies.”

Israel was the first non-member state to join the Horizon initiative in 2006.

In the previous edition of the program — Horizon 2020 — some 15,000 Israeli researchers and companies submitted grant requests and received 1,661 grants, valued at 1.28 billion euros. Of those who submitted grant proposals, 64% represent academia and research institutes, 34% represent industry and 2% represent public entities.

Israel’s participation in the 2021-2027 program was met with some debate in Europe on whether to allow Israel to apply for Horizon Europe’s quantum computing grants. The reasons given for excluding Israel included a desire to limit support for such technology to member states, though Israel participation may actually serve collective European security interests. The initial draft of the program released last March did not include Israel in its list of countries eligible for grants in this field, even though quantum computing research has been going on in Israel at a research center at the Hebrew University of Jerusalem since 2018.

The proposed exclusion of Israel as well as other non-member states sparked a squabble in Brussels between the member states. Germany reportedly played a key role in changing the policy. Austria and Denmark also apparently objected to the exclusion.

Israel signed the agreement, but insisted on two revisions. The first, authored by Israel, stated that Israel legally and diplomatically opposes the provisions regarding the settlements. It goes on to say that Israeli researchers, including those in institutions based in West Bank territories, maintain the right to submit requests for grants and other funding. The second revision, authored by the EU, states that the grants and research committees associated with the Horizon Europe project have the right to deny grants on the basis of geography.

Nevertheless, Israel is pleased with the outcome. Yael Ravia-Zadok, the deputy director general of economics at the Foreign Ministry who led the efforts to keep Israel involved the new iteration of the Horizon project, told Al-Monitor that Israel's inclusion is “a European expression of confidence in the assets of Israeli science, technology and innovation, which expands the possibilities for research and economic collaborations between Israel and the countries of the Union.