Seven dams and 27 underground wells were inaugurated by Egypt in Uganda alongside a large number of projects that serve to improve the quality of drinking water and provide water for agriculture. 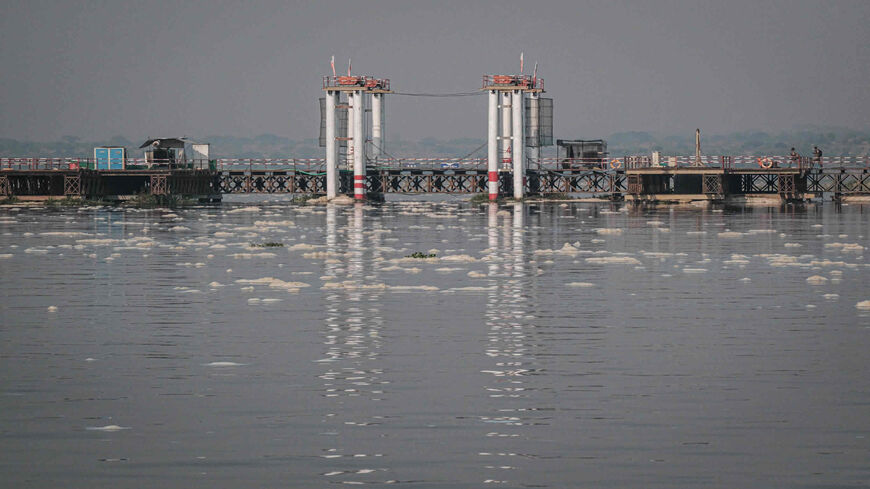 A bridge construction site on the Victoria Nile near the Murchison Falls, where the government has a plan to build a hydroelectric dam, at Murchison Falls National Park, northwest Uganda, Jan. 25, 2020. - Yasuyoshi Chiba/AFP via Getty Images

Egyptian Minister of Water and Irrigation Mohamed Abdel Aty visited Uganda Dec. 7 to celebrate the end of the fifth phase of the Egyptian-Ugandan project to control aquatic weeds in the Great Lakes, which is concerned with cleaning Lake Victoria and establishing a river marina in the Ugandan Kamunga district.

During the celebration, he announced that Egypt had inaugurated several dams in Uganda.

In an official statement, Abdel Aty noted that his country has established seven dams to harvest rainwater in Ugandan districts in order to provide drinking water for citizens and secure water needed for grazing.

During his meeting with Sam Cheptoris, minister of water and environment, and Beatrice Atim, minister of state for the environment, Abdel Aty said, “Building such a dam helps Uganda provide clean drinking water for the people and freshwater for grazing, especially since Uganda grazes about 280,000 head of cattle in the Lyantonde district alone, where the dam was built.”

The Ministry of Water and Irrigation stated that Egypt provides all forms of support to African countries in the field of water.

According to the ministry's statement, Egypt has, in addition to the seven dams, drilled 75 underground wells in Uganda to obtain clean water.

Abdel Aty’s meeting with the Ugandan officials aimed to discuss enhancing cooperation between the two countries and review ongoing projects, especially the rainwater harvesting dam project, which is being financed by the Egyptian Agency of Partnership for Development in the Egyptian Ministry of Foreign Affairs.

During the visit, Abdel Aty stressed the importance of achieving the maximum levels of cooperation and coordination between the two countries to achieve the goals of the two peoples in sustainable development and the optimal management of water resources.

Mohamed Ghanem, spokesman for the Ministry of Water and Irrigation, told Al-Monitor that Egypt has provided great support to Uganda in the past. “Apart from the seven dams for collecting rainwater, Egypt has provided a large number of projects that serve to improve the quality of drinking water as well as provide water for agriculture, in addition to working to increase fisheries and provide great job opportunities for the youth of Uganda,” he said.

He noted that a series of projects Egypt is implementing in Uganda include the construction of a 10,000-cubic-meter ground tank equipped with solar-powered water pumps, which contributes to providing clean drinking water to citizens and 280,000 head of livestock.

Ghanem added that Egypt’s projects in Uganda aim to help it manage its water resources and increase its productivity in terms of electrical energy, pointing out that drilling wells contributed a great deal to alleviate the suffering of citizens who had a hard time getting access to water.

He explained that the depth of one well, which ranges from 20 meters to 30 meters (65-98 feet), serves around 100 families or about 800 individuals in one area.

Speaking about the project to control aquatic weeds in the Great Lakes, Ghanem pointed out that Egypt and Uganda have been in the field of aquatic weed control since 1999, with an Egyptian grant of $30 million, the fifth and final stage of which recently ended with cleaning Lake Victoria and establishing a river marina in Kamunga district. “In addition, Egypt implemented a project to prevent the risks of flooding in Kasese district in western Uganda, the second phase of which is currently underway, managed by the National Water Research Center at the Ministry of Water and Irrigation in cooperation with the Nile Water Affairs Sector.”

Ghanem noted that the project contributed to improving the standards of living by increasing fish production and producing biogas and organic fertilizer, which was reflected in bridging part of the food gap, providing job opportunities, limiting the spread of diseases, improving public health and protecting the environment.

In recent years, Egypt has magnified its efforts toward the African continent by establishing cooperation between Egypt and African countries in all fields, as well as focusing on investment, economy and security. Egyptian President Abdel Fattah al-Sisi further intensified his visits to African countries, especially after the Egyptian role in Africa was restored when it was chosen to chair the African Union in 2019.