Iraq's federal court is expected to uphold the results of the election, which has been praised by Iraqi and international observers. 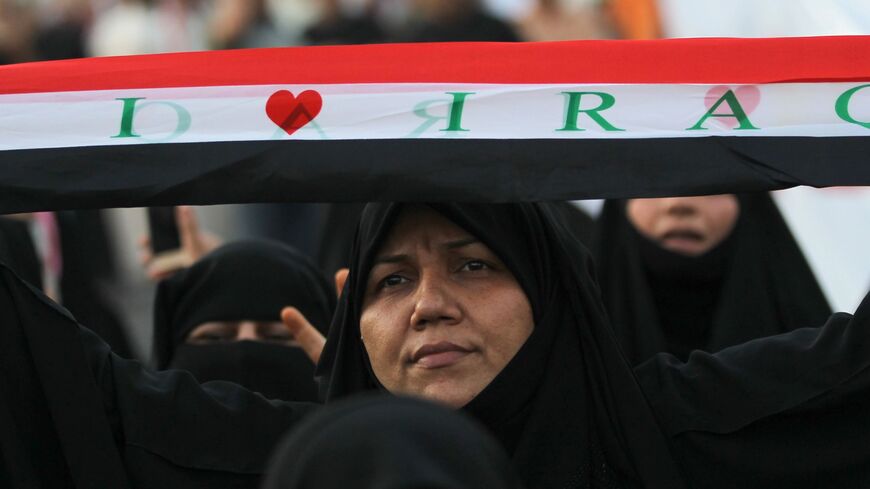 An Iraqi woman, a follower of cleric Muqtada al-Sadr, takes part in a demonstration against corruption in Iraq and demanding reform and a change in the electoral system, on Sept. 15, 2017 in the capital Baghdad. - AHMAD AL-RUBAYE/AFP via Getty Images

The losing sides in the Iraqi elections are waiting for the Federal Supreme Court to rule on the lawsuit to invalidate the results filed by Fatah Alliance leader Hadi al-Amiri, who described the annulment of the election results as the only way out of the current political crisis.

Since the Oct. 10 election, the forces that lost seats in Parliament, including the Fatah Alliance, Wisdom Movement and the Victory Alliance, have refused to accept the results and formed the so-called Coordination Framework alongside the State of Law Coalition.

The court set Dec. 13 as the date to consider the lawsuit lodged by Amiri, who told reporters following the hearing of the appeal, “We will abide by the decision of the Federal Supreme Court even if it does not do us justice. The results of the current elections have plunged the country into a predicament, and we reject any international effort aimed at imposing its will and interfering in our internal affairs.”

He added, “We do not want to hit a political deadlock, and we believe that canceling the election [results] is one of the ways out of the crisis. We reject the election results in this way.”

All signs indicate that the court  will validate the final election results and reject most of the appeals for many reasons, including the weak evidence presented by those who objected. This is added to the significant praise of the polls from international and regional organizations. Under the Constitution, no new elections shall be held unless Parliament decides otherwise, which means that the new parliament would have to vote to dissolve itself.

The defeated parties not only object to the election results, but also want to form a new High Electoral Commission and draft new legislation. Obviously, this will not take place.

The Shiite forces within the Coordination Framework are actually seeking to use all means to prolong the talks and pressure the winning blocs in the elections, mainly that of Shiite leader Muqtada al-Sadr, who seeks to form a majority government and to dissolve the militias and the Popular Mobilization Units. The Coordination Framework, however, insists on consensus in forming the next government, and opposes the efforts to dissolve the PMU militias.

A tug of war prevails between the top winner in the elections, Muqtada al-Sadr (74 seats), and the pro-Iran Shiite forces whose representation declined significantly (about 17 seats). Sadr seeks to form a majority government opposing all foreign interference and to disarm militias. The pro-Iran forces are countering Sadr’s aspirations by taking to the street, threatening civil peace, and working to annul the election results. Reaching a middle ground could take a long time.

Sadr has said he might not take part in a consensus cabinet with the defeated groups and would rather be in the parliamentary opposition. He even blamed the security decline in some provinces in the past few days on the forces opposing the results. Following the blast in Basra last week, he said in a statement that “the return of terrorism represented by the Islamic State in Makhmour, political bombings in Basra, and assassinations from here and there foretell that the political situation will more likely worsen. The fact that they are resorting to violence pushes the country to slide to dangerous risk, for the sake of a few seats.”

He reiterated the call to “restrict arms to the state institutions, and to work hard to disband all militias that misuse weapons under the pretext of resistance.”

Sadr’s remarks reflect the rift between him and those parties with presumed close ties to Iran, led by Amiri’s Fatah Alliance and Maliki’s State of Law Coalition. Although an important meeting was held at Amiri's residence on Dec. 2, Sadr affirmed afterward that he insists on the majority cabinet. Sources close to Sadr stated that he agreed to meet his opponents to maintain civil peace.

Three upcoming events may lead to an important change in the political scene, and perhaps result in some political parties leaving the Coordination Framework. First is the ratification of the elections’ final results this week; second is the first parliamentary session of the new parliament; and last the withdrawal of foreign forces from the country, scheduled for late this month under an agreement between Baghdad and Washington.

Some parties within the Coordination Framework such as the Badr Organization, Wisdom Movement, Victory Alliance,  and even the State of Law Coalition, may yield and attend the first parliamentary session or take part in a cabinet led by Sadr. But the armed forces such as Asa'ib Ahl al-Haq and Hezbollah may keep their supporters in the street to protest for a longer time, or carry out their threat of targeting US interests and camps.

This anticipated division in the Coordination Framework may facilitate the formation of the new cabinet, especially if Sadr agrees to include some of its parties.