Violent crimes perpetrated against Iraqi women and girls has led to outrage and renewed calls for women to have greater representation and decision-making opportunities in the country, as all-male government formation talks continue. 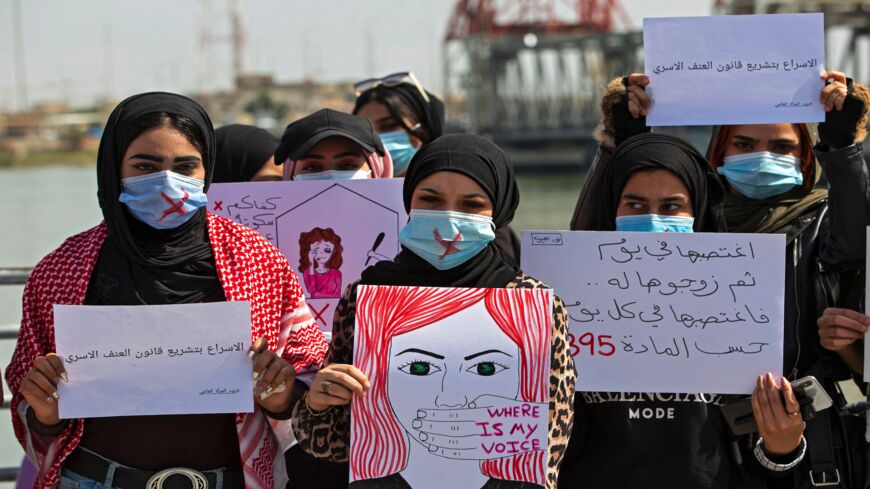 ERBIL, Iraq — The recent case of a teenage girl whose face was deformed in an acid attack, allegedly by a would-be suitor, and the rape of a young girl, allegedly by a government official, sparked indignation across Iraq in December after years of scant attention to violence against women and girls in the country.

A video made by the Interior Ministry in a hospital showed the young girl who had been raped. It claimed that the perpetrator was her neighbor and had been arrested. The video was circulated on Dec. 26 among journalists prior to the blurring of her face, which is generally considered a violation of victims’ rights.

An Iraqi human rights organization noted on Twitter that, according to their sources, the perpetrator had allegedly raped another girl before and that the other girl had been killed by her family in a so-called “honor killing” as a result. It also stated there were reports that the rapist was an employee of the Interior Ministry itself.

An Interior Ministry official in frequent contact with the media had not responded to a request for information about the case and the video — which had been sent to this journalist — by the time of publication.

At the same time, photos of exclusively male political party leaders and others meeting publicly and in homes in Baghdad’s Green Zone in the past few months as part of wrangling over positions and coalitions for the next government showcased an acute lack of women in decision-making positions.

A lack of women’s full participation in political leadership is widely seen as linked to impunity for crimes against women.

According to a UN press release, Amal Kabashi, a representative of the Iraqi Women Network, a civil society feminist alliance of more than 100 local organizations, told the United Nations Security Council in November that “meaningful representation must be reflected through an increase in the number of women in ministerial positions” in Iraq and urged “the establishment of national laws and regulations that protect women and girls from gender-based violence."

Over a year and a half before the latest high-profile case of violence against a female child, Human Rights Watch had said that Iraq had an “urgent need” for a law against domestic violence.

HRW noted then that even a 2019 version of a still-unpassed draft anti-domestic violence law “prioritizes reconciliation over protection and justice for victims” and that “the community police play a mediatory rather than a law enforcement role and focus on reconciling victim and the abuser.”

Meanwhile, policewomen at checkpoints throughout Iraq are virtually unheard of. Inappropriate comments and behavior from male security officers targeting women passing through these checkpoints are common, as this female journalist has frequently experienced firsthand while traveling alone throughout various regions of the country since 2014.

In April 2020, the gang rape of a disabled woman in Kirkuk, an oil-rich province disputed between the central government in Baghdad and the Kurdistan Regional Government (KRG), briefly sparked outrage.

As Al-Monitor reported at that time, “The men who assaulted the woman filmed the crime and posted the video on Facebook.”

Kirkuk police spokesperson Afrasyaw Kamil told the local media outlet Rudaw that the two men seen in the video posted online had been arrested, that one of them had been a police officer and that "10 men have confessed that they raped the disabled woman.”

He also claimed, however, that “the mentally unstable woman had been pushed into prostitution by her husband” who “had sent her to the men who assaulted her and filmed it.”

In April 2019, a 7-year-old girl was abducted from her school and gang-raped in Erbil. In early 2020, her father claimed that “members of the police had threatened him, telling him to drop” charges against the suspects.

After he spoke out, high-ranking KRG officials ordered that the men who had been arrested and then released be rearrested.

Meanwhile, an incident that took place in the southwestern part of Kirkuk province in early September of this year in which at least a dozen security forces were killed has led to questions about both the security forces operating in the area and official reports on it.

A female Iraqi journalist long known to have an extensive network of contacts within the security forces but who had been issued an arrest warrant for “defamation” in 2020 cast doubt on the official version of this incident.

She claimed in an article the attack had been retaliation by members of the local community after an adolescent girl had been raped by two of the security forces killed.

She also reported the men had not fought the Islamic State for two hours and run out of ammunition, as officials had previously claimed, but had instead been caught sleeping while on duty.

These claims have not yet been officially addressed by the security establishment or the government.

Studies have shown — and these incidents underscore — that a lack of respect for women can also lead to wider security issues, inter-tribal conflict and radicalization, while at the same time destroying trust in government institutions and security forces.

Though Iraqi politicians - most of whom males - often work together on the basis of sect, tribe, religion and region of origin in Iraqi politics, there is no real equivalent of women choosing “their representatives” to ensure that their rights be respected despite accounting for roughly half the population. As a whole, women are economically disadvantaged compared with men and generally cannot financially support candidates and initiatives that would further their interests.

Women are voted in by both men and women for the parliament. However, they are generally chosen for any political leadership positions by men in power and are often seen as having been selected for their perceived willingness to avoid stances that might irritate men wielding political, economic or other sorts of power.

In her address to the UN on Nov. 23, Kabashi “called for the establishment of a National Council for Women’s Empowerment, along with national laws and regulations that protect women and girls from gender-based violence,” according to the UN press release.