Kurdish activists and government agencies have submitted draft laws to amend the law on domestic violence but critics question whether it will be enforced. 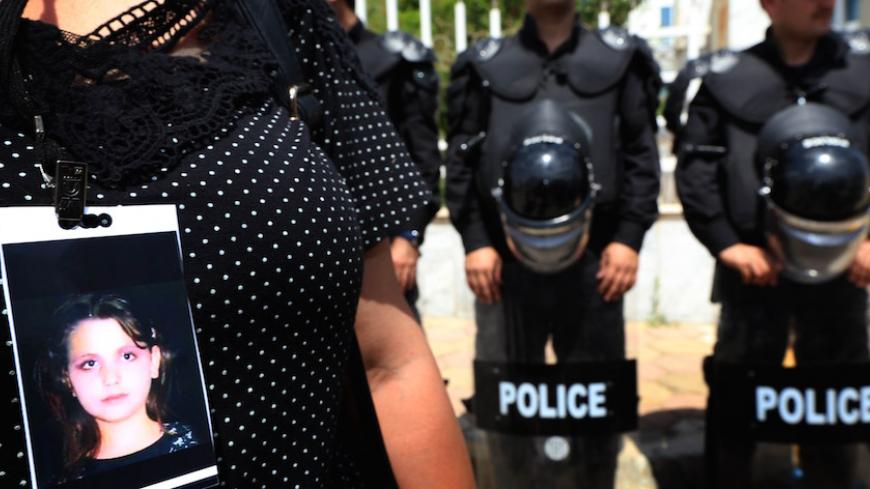 An Iraqi Kurdish woman demonstrates in front of the Kurdistan Judicial Council offices in Erbil, May 29, 2014, denouncing the murder of 15-year-old Dunia Selman (portrait) by her 45-year-old husband. - SAFIN HAMED/AFP/Getty Images

ERBIL — Activists and government agencies in Iraqi Kurdistan have drafted amendments over the past few months to the autonomous region’s existing law combating domestic violence, introducing measures aimed at better protection of women's and children's rights.

Kurdish parliamentarians will convene with the sponsors of the two drafts next week to possibly merge them into one and then introduce them on the floor of parliament, according to Kajal Hadi Faqe, a member of Iraqi Kurdistan parliament's women affairs committee.

The major draft was prepared by the Middle East Research Institute (MERI), a think tank based in Kurdistan’s capital city, Erbil, in partnership with the Kurdish government’s Ministry of Interior.

It includes provisions that protect women from undergoing baby gender tests, and being divorced or forced to abort the fetus in case it is not a boy. In Kurdistan's largely conservative society, some families still maintain a preference for male children.

The draft also criminalizes depriving a family member from owning property or wealth. In some quarters of society, women might not be allowed to receive their due share of inheritance or to retain the wealth they generate as a result of employment or business activities.

Activists hope that the parliament will start work on amending the current law within the next couple of months.

Despite the ratification of a “progressive” anti-domestic violence law in 2011, violence against women has increased. The law went into effect more than a year later.

According to data provided by the General Directorate for Combating Violence against Women of the Kurdistan Regional Government (KRG), around 2,600 cases of violence against women were recorded in the first six months of 2013. In the same period in 2014, the violations jumped to over 3,500 cases, marking an increase of about 30%.

Although officials are keen to attribute the rise in the recorded cases to an increase in awareness among women, others appear somewhat alarmed by the figures.

“Four years after this law was passed, the General Directorate for Combating Violence against Women has been established [by the Kurdish government], and about 1,000 police officers have been allotted to deal with domestic violence cases. Yet we see no significant decline in domestic violence,” said Banaz Taha, a former junior research fellow at the largely KRG-funded MERI, who coordinated the efforts to prepare the amendment draft. “Statistics and practice demonstrate that loopholes in this law are still hampering it from achieving its purpose and objective.”

A key focus of the MERI draft is on female genital mutilation (FGM) and tougher penalties for the violation.

In the case of FGM, the Iraqi-German nongovernmental organization WADI estimates that around 72% of adult women in Iraqi Kurdistan have undergone the operation.

But among girls aged 6 to 10, the rate has dropped to close to zero in some parts of Kurdistan, such as Halabja and Garmiyan, and decreased by half in other places such as Raniya. The usual age for the practice is between ages 4 and 8, according to WADI.

Researchers and activists such as Taha are quick to point out that the existing anti-domestic violence law in Kurdistan, passed in 2011, is likely to be the first of its kind in Asia to address FGM.

The draft allows girls subjected to FGM to file lawsuits against the perpetrator and those who forced them to undergo the operation. If the girl is a minor, she can file a lawsuit through a trustee.

The current anti-domestic violence law in Kurdistan imposes a punishment of one to three years of jail and a fine of 5 million to 10 million Iraqi dinars (approximately $4,000 to $8,000) for those performing or participating in FGM on minors.

“I believe it is necessary to make the punishments more severe so that people will be motivated to keep away from certain crimes,” said Faqe, a parliament member who has been involved in discussions to prepare the MERI-Ministry of Interior draft.

But some say that due to the sensitive nature of FGM, it is better if no attempts are made to change items that deal with it in the current law.

“Changing the provisions in the current law regarding FGM might actually lead to discussions in parliament that might water down penalties set for the practice,” said Tara Ali Arif, a founding member of the Women Legal Assistance Organization that has also prepared its own amendment draft.

FGM and the early marriage of girls might be seen by some as endorsed by religion. But Faqe, who is a member of the Kurdistan Islamic Union, said, “There is nothing in the draft that is contradictory with Islamic principles.”

She added, “Islam is not in favor of violence and calls for justice and equality.”

Arif sees it as necessary that the amendments limit the number of times that a victim can pardon the defendant, to one.

“Sometimes under family or psychological pressure, plaintiffs pardon the defendant several times,” said Arif, whose organization is seeking to hammer out a joint draft with MERI and the Interior Ministry so as to increase the chances of a successful amendment in parliament. “But by violating the law more than once, it should be treated as a violation of the public’s right.”

To some, however, the major problem in Iraqi Kurdistan is not the lack of laws. In fact, some of the laws such as the anti-domestic violence and journalism laws are known to be quite progressive by regional standards.

“What really matters is implementation. The law should not only be ink on paper,” said Vian Abbas Omar, a member of the Kurdistan parliament who has been involved for years in improving women conditions. “We should not only be focused on issuing new laws. ... Civil society and government agencies should [also] play their role.”

Activists and officials that Al-Monitor spoke with pointed to the complex web of social and tribal relations, and in some cases the failure of certain judges to uphold the law and lack of motivation or power by some law enforcement agents to carry out their tasks as factors compounding the proper implementation of the laws meant to protect women.

Kurda Omar, the director of a government agency in charge of following up on violations against women, believes that amending the existing anti-domestic violence law has become a necessity.

“There is no measure in the current law that defends the public right in the sense that if a woman is in danger, we cannot take action until she reaches out to us,” Omar said. “And this is not possible in many cases. We need to have the right to act on behalf of the public and follow up on violations we learn of.”

She also believes some judges have been remiss in adhering to the law.

“Some judges act based on their own mood,” she said.