Public anger over the death of a girl after she underwent female genital mutilation has forced both the Egyptian government and top clerics to take a stand. 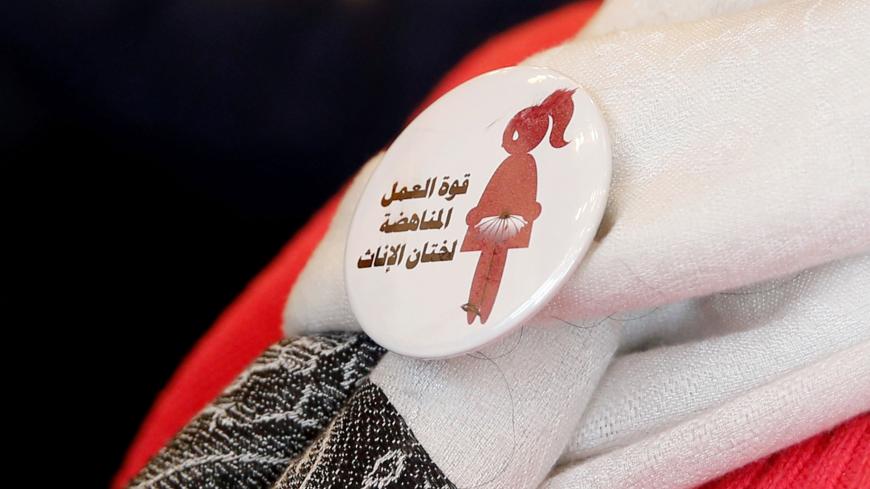 A volunteer wears a badge against female genital mutilation at a conference on the International Day of Zero Tolerance for Female Genital Mutilation in Cairo, Egypt, Feb. 6, 2018. - REUTERS/Amr Abdallah Dalsh

Egypt is seeking amendments to the country's law against female genital mutilation (FGM) to plug loopholes that allow health practitioners and families of girls who undergo the outlawed procedure to escape punishment.

"A committee is being formed to study the law and recommend changes to curb the practice," Maya Morsy, head of Egypt's National Council for Women, announced in February.

“The current anti-FGM law is self-contradictory and has loopholes that make it difficult to convict doctors and other health practitioners who perform the procedure," lamented Nehad Abul Komsan, founder and director of the Egyptian Center for Women's Rights.

“The law includes a provision that exempts offenders from punishment if they carry out a procedure that is medically necessary or justifiable to protect the patient from harm. Some doctors use this as a basis for their fallacious argument that FGM is necessary to protect young girls from harm,” she told Al-Monitor.

In what appeared to be a shift from the previous wavering on FGM by the country's religious institutions, Dar Al Ifta, the state authority responsible for issuing religious edicts, republished a fatwa from 2018. The edict found prohibition of FMG to be “in line with the objectives of Sharia and the interests of the people." It also said that FGM proponents base their opinion on “weak hadiths” and pointed out that the Prophet Muhammed did not have the procedure performed on his daughters.

The Dar Al Ifta statement comes in the wake of the recent death of a young girl in Manfalout, a city in the southern Egyptian governorate of Assiut. 12-year-old Nada Abdul Maksoud bled to death after undergoing FGM at a private clinic in late January. Her parents, an aunt and the retired doctor who performed the procedure were arrested but released four days later on bail, pending further investigations.

Their release provoked an international outcry with children's rights campaigners calling for jail terms to the family and the doctor to deter others from the illegal practice, which widespread in Egypt.

"A 12-year-old girl has lost her life, becoming the latest in a string of fatalities caused by FGM. We need to see offenders punished for their crime. If justice is not served, we can only expect a recurrence of this heinous crime," Abul Komsan told Al-Monitor.

She also cautioned against the use of the term “cosmetic surgery” to refer to "the crime of mutilating the external part of the female genitalia."

“Using the term 'cosmetic' to describe genital mutilation or cutting is a deliberate distortion of facts. The Medical Syndicate must advise medical practitioners that removing part of the clitoris is by no means cosmetic," she said, in reference to the accused doctor's claim during the investigation that he had been performing plastic surgery on the girl minutes before she died.

The girl's parents admitted, however, that they had taken their daughter to the clinic to undergo FGM. Forensic experts who examined her body concurred that the girl had been subjected to FGM.

Succumbing to public pressure, prosecutors have referred Nada's parents and the doctor for trial but no date has yet been set for their hearings.

Egyptian doctors have waged an awareness campaign in Cairo metro stations alerting commuters to the harmful effects of FGM. The "White Coats Campaign" began Feb. 11 by a group of doctors from the non-governmental Union Against Harmful Practices on Women and Children, a Cairo-based network that works to "build the capacities of civil society organizations to eradicate FGM and combat all forms of violence against women and children."

The campaigners, who say they do not want their white coats stained with the blood of young girls, distributed leaflets on the dangers of FGM and put up posters reading "FGM is a crime" and "No to FGM." Volunteers were on hand to respond to commuters' questions about FGM and explain why the centuries-old practice must end.

FGM is increasingly medicalized, with "82% of FGM incidences in the country carried out by a health professional," according to Anita Nirody, UN Resident Coordinator and UNDP Resident Representative in Egypt.

While the practice cannot be justified by medical reasons, many families that choose to have their daughters "cut" believe they are reducing the risks of bleeding and infection by having a doctor rather than the traditional midwife perform the procedure.

Dr. Abdel Hamid Attia, a professor of obstetrics and gynecology at Cairo University, refuted the notion as "deceptive." Attia who heads Doctors Against FGM, an initiative that aims to end the practice, said he tells young doctors that the procedure is unethical. "FGM is not part of the curriculum for medical students and should not be performed even if the parents request it,” he told Al-Monitor.

"FGM is harmful in all cases, whether it is carried out by a doctor or midwife," he said. "Complications include infections (urinary and vaginal), injury to adjacent tissue and hemorrhage, to mention but a few. Girls who undergo FGM may also likely suffer extreme pain and shock. The procedure may also lead to difficulties in childbirth, even infertility," he noted, insisting that "FGM scars women and girls for life as it affects their physical, psychological and sexual well-being. Lack of sexual pleasure for women that have been cut can lead to husbands having extramarital affairs or remarrying."

But despite the warnings from some doctors, FGM remains highly prevalent in Egypt with many families, particularly those in rural communities, believing it keeps their daughters chaste and marriageable. According to a 2014 survey by the National Population Council, 61% of Egyptian girls aged between 15 and 17 were found to have been circumcised, a marked drop from the 74% reported for the same age group six years earlier. Despite the apparent decline, Egypt still has the highest FGM rates in the Middle East and ranks fourth in Africa.

August 2016 amendments to the 2008 anti-FGM law enhanced the penalties for FGM, designating the procedure a felony rather than a misdemeanor and mandating increased prison sentences of between five and seven years for violators instead of the previous prison terms of three months to two years. If the procedure leads to death or permanent injury, the health practitioner responsible faces punishment of up to 15 years in prison. Parents also face jail sentences of between one to three years for consenting to the procedure.

So far, however, the penalties have failed to curb the practice, mainly because the crime tends to go unreported. In cases where it results in a girl's death, the physician often pays a sum to the bereaved family as compensation for the loss of their child. The first doctor was convicted of causing a death related to FGM in January 2015. Dr. Raslan Fadl was given a sentence of two years and three months in prison after he was found guilty of manslaughter. But Fadl was released after spending three months in prison, having reconciled with the girl's family. His release dashed the hopes of rights advocates that his landmark conviction would deter other physicians from performing the procedure.

According to Abul Komsan, the challenge lies in convincing both health practitioners and rural families that FGM is neither rooted in religion nor does it protect the family honor.

"The resistance from some hard-line preachers must be met with an intense public awareness campaign against the practice. What we need is a unified message from all preachers that Islam forbids all that is detrimental to one's health. We also need clear-cut policies against FGM. The government must send a clear message to all medical institutions and the public that it is adopting a zero-tolerance policy vis-à-vis the practice,” she said, adding, "All hospitals and medical institutions must state clearly that FGM is a crime. The authorities must conduct regular inspections on clinics, especially during 'FGM season' in summer right after exams, to ensure that physicians abide by such rules."

"We need to keep the momentum and we mustn't stop until FGM is entirely eradicated. The death of one girl is one too many,” she concluded.