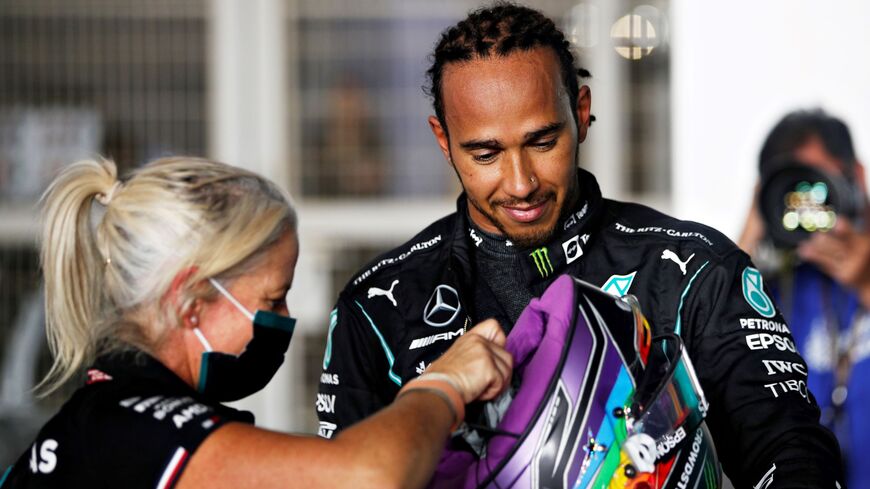 Pole position qualifier Lewis Hamilton of Great Britain takes off his helmet during qualifying ahead of the Formula One Grand Prix of Qatar at Losail International Circuit on Nov. 20, 2021 in Doha, Qatar. - Hamad I Mohammed - Pool/Getty Images

Days before Formula One will host its first race in Saudi Arabia, star driver Lewis Hamilton criticized the kingdom’s human rights record and said he didn’t feel comfortable racing in the Gulf country.

Saudi Arabia is hosting the Grand Prix at a brand-new track built in its second-largest city of Jeddah on Dec. 5. Advocacy groups have accused the kingdom of “sportswashing” to distract from rights abuses.

“If anyone wants to take time to read what the law is for the LGBT+ community, it is pretty terrifying,” he said. “There's a lot of changes that need to happen, and I think our sport needs to do more."

In a statement Thursday, Human Rights Watch urged race drivers, teams and participants at Sunday’s inaugural Saudi Arabian Grand Prix to publicly call for the release of imprisoned activists, including those jailed for campaigning for women’s right to drive.

“The Saudi government is going all out to bury its egregious human rights abuses beneath public spectacles and sporting events,” said Michael Page, the rights organization’s deputy Middle East director.

“Unless they express concerns over Saudi Arabia’s serious abuses, Formula One and participating performers risk bolstering the Saudi government’s well-funded efforts to whitewash its image despite a significant increase in repression over the last few years,” he added.

Canadian pop star Justin Bieber is among the artists performing in Jeddah on Sunday. Last month, the fiancee of slain Washington Post columnist Jamal Khashoggi urged Bieber to cancel his performance, rather than use his talent to “restore the reputation of a regime that kills its critics.”