Ra’am leader Mansour Abbas made big waves when he said that Israel was and will remain a Jewish state. 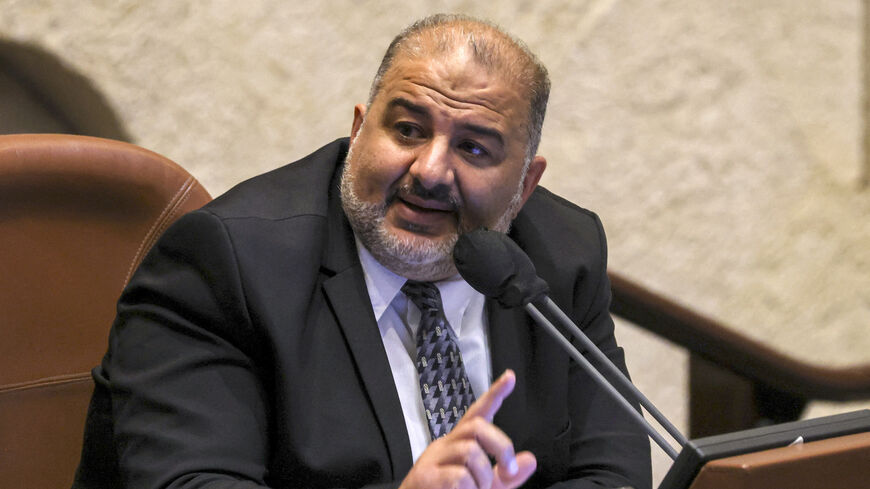 Mansour Abbas, head of Israel's conservative Islamic Ra'am party, speaks in his capacity as Knesset deputy speaker during a plenum session on the state budget on Sept. 2, 2021. - AHMAD GHARABLI/AFP via Getty Images

“Israel was born as a Jewish state. And that was the decision of the Jewish people, to establish a Jewish state,” said Knesset member Mansour Abbas, head of the Israeli Islamist party Ra’am, in a statement that stunned listeners at a Dec. 21 conference hosted by the financial newspaper Globes. “That’s how the state was born, and so it will remain. The question is not about the state’s identity, but about the status of its Arab citizens.” Asked whether he was aware of the significance of his comments, Abbas responded, “We should be waging a struggle for the status of Arab society as a collective inside the State of Israel as it was born.”

While Abbas did not explicitly recognize Israel’s official legal definition as a “Jewish and democratic state,” contested for decades by leaders of the Arab-Israeli population, he did say Israel was established in 1948 as a Jewish state.

Truth be told, this was not Abbas' first such statement. He said the exact same things a month ago in an interview with the Arabic-language Kul al-Arab news site. Still, this week he was addressing a mostly Jewish audience in Hebrew. Naturally, the statement set off a storm. The audience cheered, clearly excited by his reference to one of the most divisive issues in Israel’s existence and political discourse.

Abbas’ former political partners — the Joint List from which Ra’am split last February, were not happy. Senior Joint List official Ahmad Tibi also took the stage at the Globes event, rejecting Abbas’ statement. “We do not accept anyone’s patronage over us. I know that what I am saying will not generate applause,” Tibi conceded, but added that the 2018 nationality law had created “a new classification of citizens … and we cannot accept that.” The legislation, he added, “anchors the Jewish state in law and grants collective rights to Jews, while depriving the Arabs …and its underlying mindset is that 20% of the citizens should accept” that their rights are limited to “civilian matters.”

Chair of the Joint List Ayman Odeh tweeted, “Neither the nationality law nor Mansour Abbas can change the fact that we are not subjects of this state, we are the sons of this homeland, its citizens by right, and we will continue to work for equality and democracy. The question of the state’s identity should interest every citizen — Jew or Arab — who cares about peace and democracy.”

Knesset member Sami Abu Shehadeh, chair of the Balad party that is also part of the Joint List, announced, “Mansour Abbas’ split personality is misleading both Jews and Arabs. There is Mansour in Arabic and Mansour in Hebrew, and they contradict each other. Only a state of all its people can lead to justice and full equality for all citizens.”

Abbas chose to answer the attacks by his former partners in a lengthy Arabic-language Facebook post that has apparently been deleted, saying, “The correct way to conduct our struggle lies in the answer to the question of what we want, and not what we don’t want.” He claimed his opponents were misleading their electorate instead of facing reality. He said they are “simply exploiting people’s feelings without telling them that this is the State of Israel we are talking about. The situation of Arabic society will not improve as long as the leaders do not respect our sons. Instead, they insist on drugging them with outdated slogans. Our initiative is designed to empower Arab society and strengthen its standing without falsifying the facts.”

Abbas’ pragmatism has angered his Arab constituents since he joined the coalition government. When the public security minister castigated lawbreaking settlers Dec. 16, instead of backing Omer Bar-Lev against settler violence, Abbas declared, “One must not generalize about any group, not about the settlers, not about the ultra-Orthodox and not about the Arabs.”

Abbas’ conciliatory remark drew an attack by Ra’am head Ibrahim Hijazi. “Ra’am’s official position is what counts and all our representatives are bound by it. The settlements are not legitimate and sooner or later will be wiped out,” he said in an interview, adding that Arab citizens must not be equated with settlers.

The conference statement triggered anger not only among Arab leaders but also the wider public, which just three years ago took to the streets in great numbers to protest the nationality law. Journalist Sheren Falah Saab from the Arab Galilee village of Abu Snan tweeted, “There’s a limit to how much one can be a pet Arab,” she wrote. She elaborated in an interview with Al-Monitor, “Abbas’ defeatist attitude refers only to human rights and allocation of economic resources, without placing any significance on the national aspect. In the long term, this is a damaging approach toward the Arab citizens given that they have no rights as a national minority.”

On the other side, Ra’am activist Mahmoud Frej from the central Israeli town of Kfar Qassem told Al-Monitor that Abbas’ statement was “clear and realistic," saying, "The State of Israel is a Jewish state. For him, what is important is not the status of the state but the status of its Arab citizens. He wants to provide hope of change and joining governmental power centers will automatically turn him into an enemy of the Arab parties and the Arab media.”