A new report from the the UN Development Programme estimates 1.3 million people will die if the war in Yemen continues through 2030. 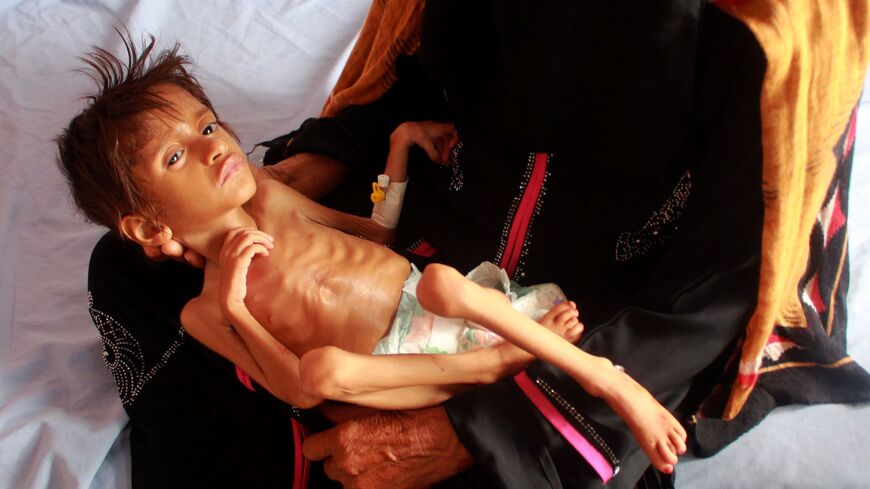 A woman holds a malnourished child at a treatment center in Yemen's northern Hajjah province on July, 5, 2020. The war in the Arabian peninsula's poorest country, has mutated into what the United Nations calls the world's worst humanitarian crisis. - ESSA AHMED/AFP via Getty Images

The death toll from the civil war in Yemen is expected to hit 377,000 by the end of 2021, according to a new report from the United Nations.

Of those deaths, the UN Development Programme (UNDP) estimates nearly 60% will be caused by a lack of access to food, water, healthcare and other indirect causes.

An overwhelming majority of those deaths will be among young children. The UN estimates one Yemeni child under the age of five dies every nine minutes due to the conflict, with malnutrition being one of the leading causes of death.

Yemen has been embroiled in chaos since the Iran-backed Houthi group overran much of the country, including Sanaa, in 2014 and expelled the internationally recognized government led by President Abed Rabbo Mansour Hadi. A US-backed, Saudi-led military coalition intervened in the conflict in March 2015 to restore the Yemeni government, and the fighting has since created what the UN describes as the world’s worst humanitarian crisis.

Using statistical modeling to project future scenarios, the report says if war continues through 2030, an estimated 1.3 million people will die, mostly from indirect causes. The number of people in poverty will grow to 22.2 million, and 9.2 million will face malnutrition.

But the report contains a glimmer of hope. If the fighting stops, UNDP says extreme poverty in Yemen could be eradicated by 2047 and the country could reach middle-income status by 2050. Under that scenario, rates of malnutrition could be halved by 2025, and Yemen could produce $450 billion in economic growth by 2050.

“The study presents a clear picture of what the future could look like with a lasting peace including new, sustainable opportunities for people,” said UNDP Administrator Achim Steiner.

The report says that with a lasting peace deal, Yemen can make up for lost time. In March, the Houthis rejected Saudi Arabia’s US-supported cease-fire proposal, saying the agreement didn’t go far enough to lift the coalition’s blockade tactics on the country.