US approves sale of air-to-air missiles to Saudi Arabia

The Biden administration says the weapons are key to Saudi Arabia's self-defense from Iran-backed drone attacks out of Yemen. 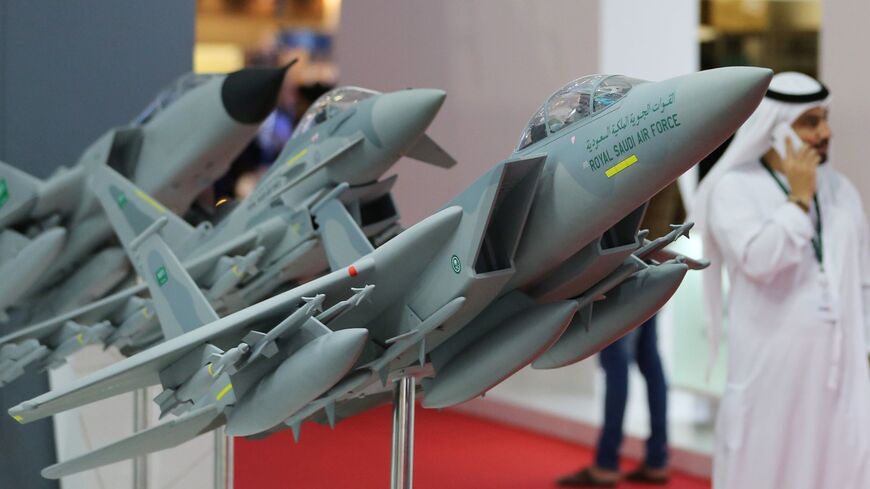 Models of Saudi Royal Air Force fighter jets are seen during the Dubai Airshow on Nov. 12, 2017, in the United Arab Emirates. - KARIM SAHIB/AFP via Getty Images

The Biden administration on Thursday approved a $650 million sale of advanced medium-range air-to-air missiles for Saudi Arabia, citing US support for the Gulf kingdom’s self-defense.

The missiles “have been instrumental in intercepting the persistent UAS [drone] attacks that have put US forces at risk and threatened the more than 70,000 US citizens in the kingdom,” according to a State Department spokesperson.

Saudi Arabia ordered up to 280 of the Raytheon-made AIM-120C missiles in order to replenish the kingdom's depleted stockpiles.

The missiles are “not used to engage ground targets,” the spokesperson wrote via email.

The proposed sale “is fully consistent with the administration’s pledge to lead with diplomacy to end the conflict in Yemen while also ensuring Saudi Arabia has the means to defend itself from Iranian-backed Houthi air attacks,” the spokesperson wrote.

Why it Matters: The claim that the missiles will defend American citizens may or may not sway Congressional lawmakers who remain critical of Riyadh’s human rights record.

The Biden administration has made ending the war in Yemen a priority.  Despite years of Saudi-led bombing, the Houthis have  made substantial gains in the war, and Riyadh is seeking an exit. But the rebels refused a Saudi ceasefire proposal put forth earlier this year, demanding first an end to the blockade.

Meanwhile, the Houthis continue to launch drone and missile attacks into the kingdom using weapons technology believed to be supplied by Iran.

The Saudis have been reluctant to ease the restrictions, in part out of fear of an increased flow of weapons to the Yemeni rebels. In return, Saudi officials have asked Washington to first boost the kingdom’s own defensive capabilities, Reuters reported last month.

“I think what that boils down to is that there is a conversation between the US and Saudi Arabia about how best to deliver on the president's commitment to defend the kingdom, but not to provide offensive weapons for the Yemen conflict,” an unnamed US official told Reuters.

What’s Next: Congress was formally notified of the sale proposal on Thursday, and it is likely to meet some resistance.

President Joe Biden pledged to end US support for the Riyadh-led military campaign in Yemen’s civil war, but some lawmakers see his promise as unfulfilled.

The House passed a measure in September that – if it becomes law – would end US maintenance support and spare parts for the Saudi-led coalition warplanes. Maintenance contracts for the Royal Saudi Air Force have continued, event though a number of now-senior Biden administration officials supported such a moratorium prior to their taking office.

The House amendment is unlikely to clear the Senate, but debates in Congress over the fine line between offensive and defensive support for Riyadh are guaranteed to continue.

Know More: Read Al-Monitor’s latest coverage of Houthi advances in the battle for Marib, a final government holdout in the country’s civil war.