If passed by the Senate, the joint resolution would block the sale of 280 air-to-air missiles to Riyadh. 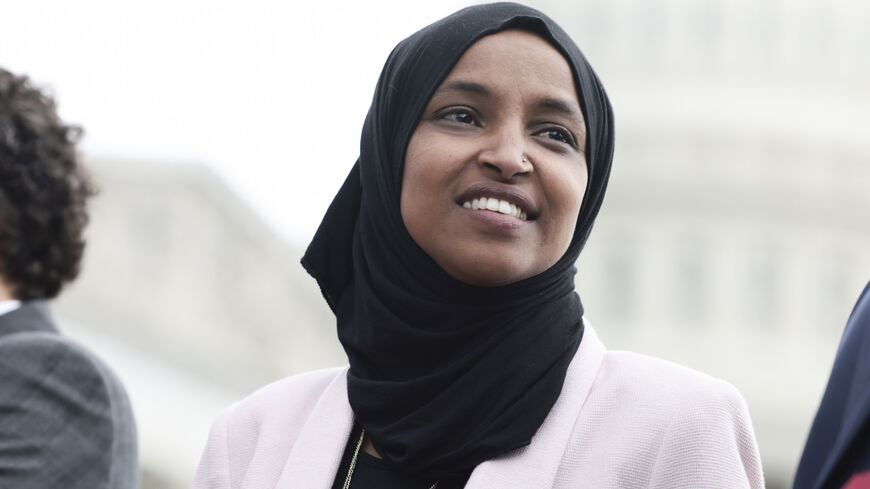 Rep. Ilhan Omar (D-MN) listens during a news conference on the treatment of Haitian immigrants at the U.S. border in Texas on Sept. 22, 2021 in Washington, DC. - Anna Moneymaker/Getty Images

US Congresswoman Ilhan Omar (D-Minn.) on Friday introduced a joint resolution to block a $650 million sale of air-to-air missiles proposed by the Biden administration for Saudi Arabia.

The sale was notified to Congress last week and billed by the State Department as part of the Biden administration’s efforts to continue providing defensive aid to Saudi Arabia amid a pledge to cut off support for the kingdom’s war in Yemen.

The proposed sale is “fully consistent with the administration’s pledge to lead with diplomacy to end the conflict in Yemen while also ensuring Saudi Arabia has the means to defend itself from Iranian-backed Houthi air attacks,” a State Department spokesperson said last week.

But Omar, a leading progressive voice among Democrats, called the proposed arms transfer “simply unconscionable” in a statement on Friday.

“It is simply unconscionable to sell weapons to Saudi Arabia while they continue to slaughter innocent people and starve millions in Yemen, kill and torture dissidents and support modern-day slavery,” Omar said in a statement, in apparent reference to recent allegations by French prosecutors against a Saudi prince.

“We should never be selling human rights abusers weapons, but we certainly should not be doing so in the midst of a humanitarian crisis they are responsible for,” the Minnesota congresswoman said.

The joint resolution could hold up the sale of the missiles and nearly 600 launchers if approved in the Senate.

Omar, who sits on the House Foreign Affairs Committee, reintroduced a bill last week with Reps. Ted Lieu (D-Calif.) and Sara Jacobs (D-Calif) that would reform the House’s arms sale approval procedures to more closely mirror those in the Senate.

The Arms Sale Oversight Act, first introduced in 2019, was reintroduced last Wednesday in response to the Biden administration’s announcement of plans to sell the air-to-air missiles to Saudi Arabia.

Bipartisan opposition to US arms sales to Saudi Arabia and the UAE — core members of the Gulf military coalition's war effort in Yemen — has gained steam in recent years amid growing revelations about the coalition's human rights violations and Riyadh's violent repression of dissidents.

The Biden administration says it has ended support for offensive Saudi operations in the conflict.

The US and the UN have urged Saudi Arabia to wind down the conflict and lift the blockade of Yemen's ports – a major demand of the Houthi rebels.

Reports this week of Saudi withdrawals from bases in Yemen, though denied by Riyadh, have raised speculation that the Gulf's involvement in the conflict may finally be winding down.

If Omar's resolution were to pass the Senate, it could face presidential veto — a right exercised three times by former US President Donald Trump in order to move forward with arms sales to Riyadh and Abu Dhabi.