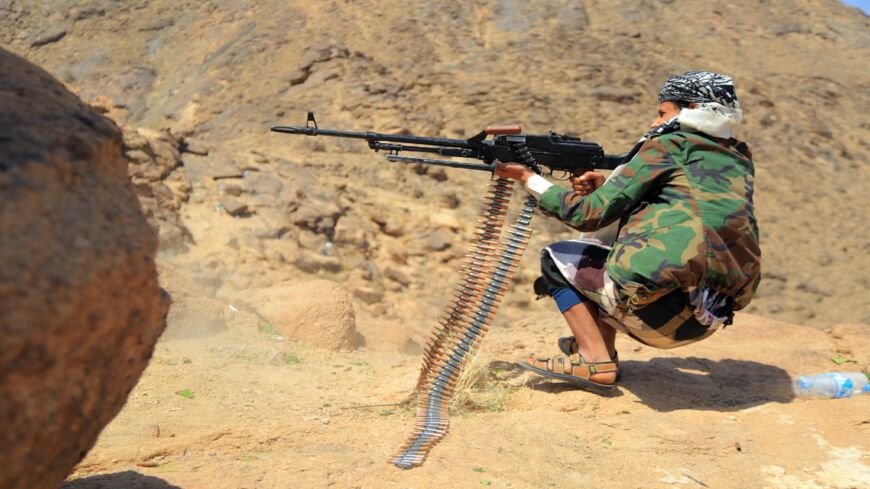 A fighter loyal to Yemen's Saudi-backed government takes position at the front line facing Iran-backed Houthi rebels in the country's northeastern province of Marib, on Oct. 20, 2021. A Saudi-led coalition said on Oct. 20 it killed more than 82 Houthi rebels in airstrikes in two districts near Yemen's strategic city of Marib during the second week of intense fighting. - AFP via Getty Images

The Saudi Arabia-led military coalition fighting Houthi rebels in Yemen has denied reports of troop withdrawals in the country.

Coalition spokesperson Col. Turki al-Maliki told Reuters that reports of Saudi troops pulling out of a major base in Aden in Yemen’s south were “baseless and unfounded,” characterizing recent moves as “redeployment.”

“Movement and redeployment of troops based on operational and tactical assessment” is standard “in all military forces across the world,” Maliki said.

Reuters earlier cited Yemeni security officials and witnesses as saying the Saudis had withdrawn from a base in Aden’s Burayqah neighborhood, loading convoys of troops, artillery and other hardware onto ships in the port.

The drawdown comes amid a renewed push by the United States and the United Nations to convince parties to the conflict to end the war.

Yemen’s Houthi rebels have taken control of most of the country’s population centers since their uprising picked up speed in 2014.

An Arab military coalition led by Saudi Arabia intervened with ground troops and a bombing campaign backed by the United States in 2015. The Saudi-led war effort has been intensely criticized by rights groups and UN investigators for its disregard for civilian casualties.

The campaign has also failed to stop the Houthis’ advance. After wide leeway from former President Donald Trump, current President Joe Biden has restricted US support to the Saudi military by cutting off assistance for offensive operations and relevant arms sales.

Riyadh has sought an exit to the war, but the Houthis have ignored a Saudi cease-fire proposal put forth last year. The Yemeni rebels have demanded the Gulf coalition fully lift its blockade of Yemen’s ports and main airport, which has been criticized by the UN.

The Biden administration notified Congress last week of a potential sale of air-to-air missiles to Riyadh that it said are commonly used by the Royal Saudi Air Force to shoot down Houthi projectiles.

A State Department spokesperson described the sale proposal, which requires lawmakers’ approval, as “fully consistent with the administration’s pledge to lead with diplomacy to end the conflict in Yemen while also ensuring Saudi Arabia has the means to defend itself from Iranian-backed Houthi air attacks.”